Local Achievers (If you know of someone who has achieved some distinction in any capacity please let us know for inclusion here – preferably with a photo ) and their agreement of course. 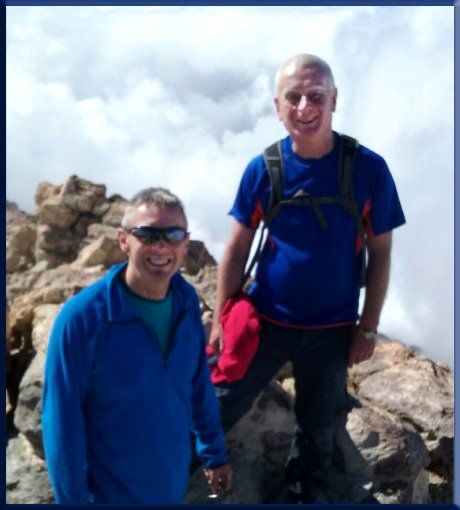 Our local Nationalist scribe (coming close to 50 years of contributions) with friend Paul at the summit of Spain’s highest mountain, Teide 12,000 ft.

[ˈpiko ðel ˈteiðe]
, “Teide Peak”) is a volcano on Tenerife in the Canary Islands. Its 3,718-metre (12,198 ft) summit is the highest point in Spain and the highest point above sea level in the islands of the Atlantic. At 7,500 m (24,600 ft) from its base on the ocean floor, it is the third highest volcano on a volcanic ocean island in the world after Mauna Kea, Mauna Loa and others in Hawaii.[2] Its elevation makes Tenerife the tenth highest island in the world. 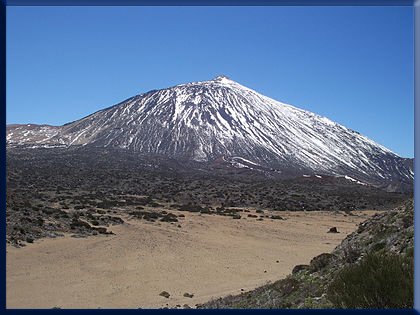 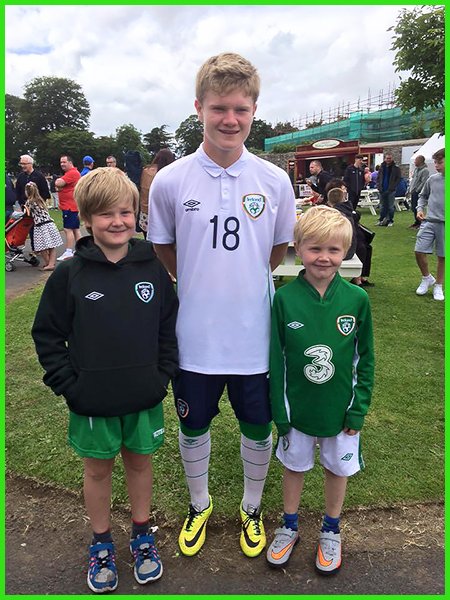 First match against Wolverhampton Friday 5.45. He didn’t start but played 15 minutes, Ireland won 2-0.  Second match against St Joseph’s Boys FC played full match 3-1 to Ireland squad with two of the goals assisted by Andrew. Rested for third match against Sunderland. Unfortunately Ireland lost 2-1, knocking them out of final and into match for 3rd/4th position with Match against Northern Ireland whom they beat coming in 3rd overall.

Andrew pictured with his brothers Ross and Nathan. 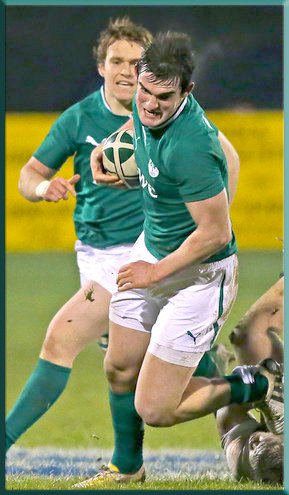 Congratulations to Thomas Daly, Castlegrace on being selected for the rugby award in the County Carlow Sports Stars Awards, April to June. Thomas is an All-Ireland League winner with Lansdowne. In his absence his mother, Rosarie, was presented with the award by PL Curran (Awards selection committee) in The Seven Oaks Hotel, Carlow on Friday 24 July. 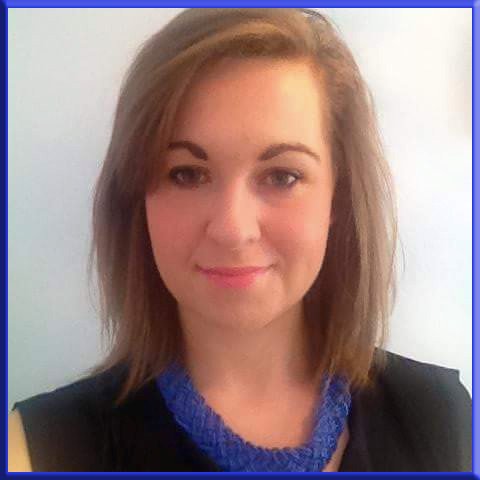 Susan created history over the weekend by becoming the second lady from Carlow to ever take the crown.  The competition is an opportunity for girls from Ireland and abroad to represent their regions in an effort to be crowned International Miss Macra. The format of this competition is similar to do that of the Rose of Tralee.
Susan, a business student in the Institute of Technology Carlow, is currently working as summer intern with Quinns of Baltinglass. She also currently holds the position of sectary of Tullow Macra Na Feirme.
A special mention has to go to all the members from Carlow Macra and Tullow Macra Na Ferime who travelled to support Susan this weekend. 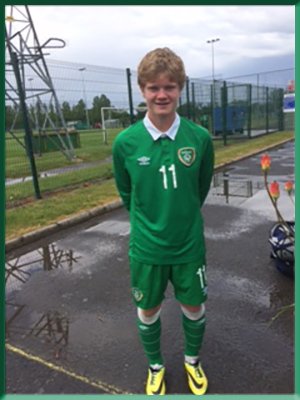 A Ballon teenager made such an impression in the Kennedy Cup under-14 soccer tournament in Limerick in June that he received a call  to attend trials for the under-15 Irish Squad to compete in the Hibernian trophy in August. Andrew Farrell who is son of Ian and Elayne Farrell, Forge Meadow was overjoyed this week when he received the call from the FAI that he had made the squad for this prestigious competition. He will receive his kit on Friday 14 August. The old adage that ‘the apple never falls far from the tree’ applies here as Ian was a former player with Cherry Orchard, Ballyfermot United and Cole Park in Dublin and as a Burrin Celtic player he was the County Carlow Player of the Year winner at the Carlow Sports Stars Awards in 1996. 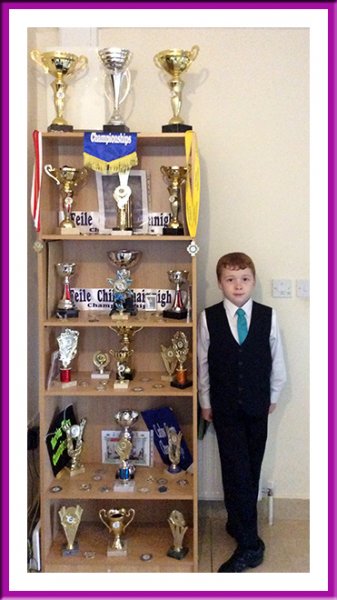 Although he only attended his first lesson in December 2013 nine-year-old Paddy O’Reilly from Rathrush, Rathoe has already made his mark in the world of Irish Dancing. Paddy, who has an identical twin brother John, is son of Myles and Bridget O’Reilly and is a member of the Emily Kirwan Dance Academy where his tutors recognised his outstanding potential at an early stage. In his short career to date Paddy has won first prize cups, medal and trophies in places as diverse as Kilkenny, Athy, Castlecomer, Ballyfin and Carlow. His biggest challenge to date will come on 29 March when he competes at the World Championships in Glen Eagles Hotel, Killarney. But paddy takes that challenge in his stride and says that he is just proud to represent his Academy, his School (Rathoe NS) family and friends on the world stage. In return Paddy’s parents are justifiably proud of their son’s achievements and his trophies are prominently displayed in the O’Reilly household. As he prepares for his dream trip to Killarney Paddy’s mother father and brothers, Jimmy, Michael and John, not to mention grandmother, Maggie, his friends, teachers and other dancers in the Academy wish him every success on the world stage. Go Paddy!

Ballon man Joe Donoghue was presented with his medal of office last February. This is the first time that the medal has been presented to the Rounders president. 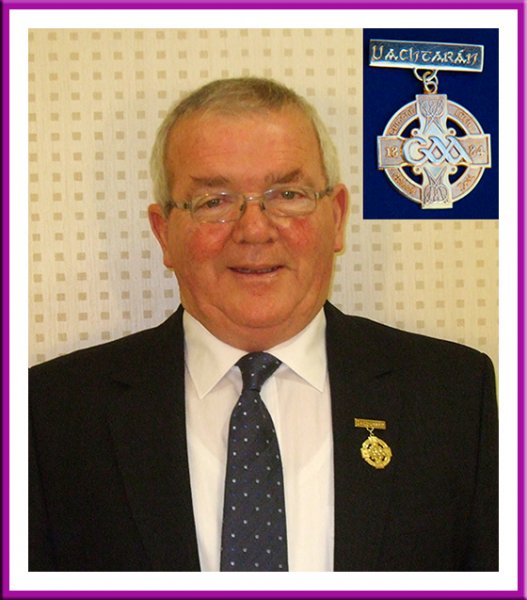 Joe volunteers most of his time to supporting the growth and awareness of Rounders throughout the country. It is a game with growing interest and meets the needs of those not attracted to contact sports and suitable for boys and girls of all ages. 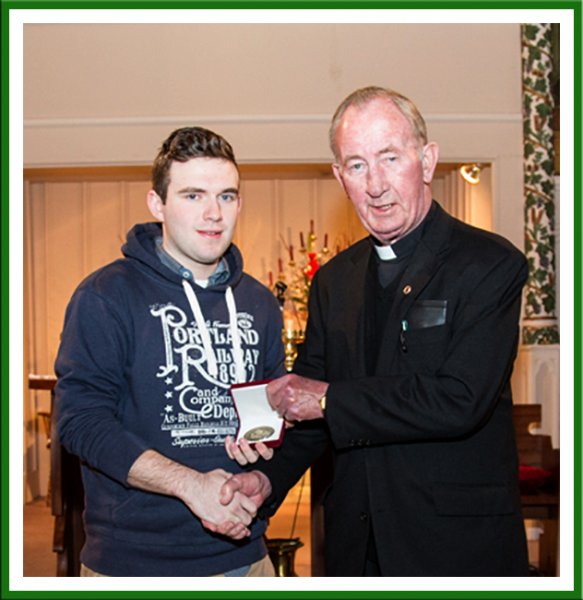 John Donohoe, from Shraugh, Ballon receives the John Paul medal from Fr. Howard PP for services given to the community. 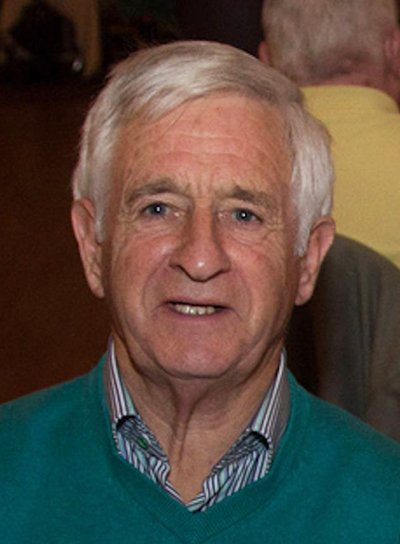 Bertie Murray, Ballintrane was the recipient of the 2014 Outstanding Service Award at the Leinster Athletics Association of Ireland (AAI) presentation night held in the Seven Oaks Hotel, Carlow recently. Bertie gets his award for a lifetime of dedication and service to athletics, first as an athlete and later as an organiser of many of County Carlow’s track and field championships and cross country events down the years as well as acting as official starter at all events in Carlow for over 35 years. He was also to the fore in organising the famous Ballinree Open Sports which took place annually for over 50 years up to 1968.

Bertie had a distinguished career as an athlete and at the Carlow track and field championships in 1959 set a unique record of winning the 200 yards, 400 yards, 800 yards, I mile and 3 mile and repeated the same feat in 1960, ’61 and ’62. During the same period (1958 to 1963) he won the Odlum Cup for the Carlow men’s senior cross country championship for six successive years. He won the Leinster 1500 metres in 1961 and at national level finished third in the 1500 metres in 1959 and was runner-up the following year. In 1960, when finishing second in the Annual Invitation College Races, he was inside the then Irish record.
This latest award is Bertie’s third major honour having received the ‘Hall of Fame’ Award from St Laurence O’Toole’s AC ‘in 1999 and at the County Carlow Sports Star Awards in 2005.