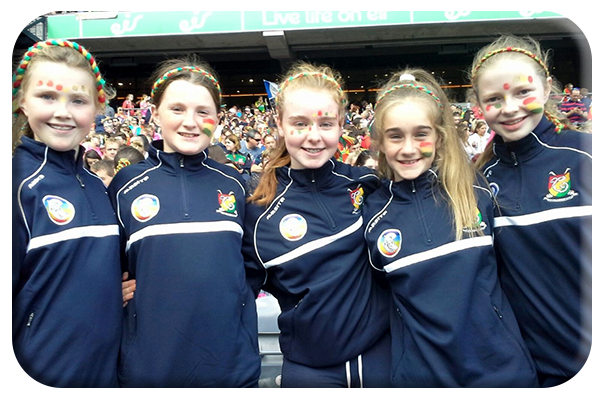 On Saturday, the day before the All Ireland Final the Carlow Under 14 Development Squads took part in their own All Ireland Finals in Dublin. For the first time ever, Carlow had two teams taking part, with both teams reaching their finals in Division 3 and Division 5. Burren Rangers were proudly represented on the squad by five local girls

The girls all played their part in some great displays of camogie. James Connolly, who has trained this group of girls in the club since 2010 was one of the team mentors with the county development squad this year. This lucky group of girls had the added bonus of parading around Croke Park with all the county development squads less than an hour after Carlow had won the Premier Junior All Ireland Final. A never-to-be forgotten experience for the girls. The huge crowd included two busloads that travelled from Burren Rangers to lend their support. This trip was organised by Lisa Raleigh and the club wishes to thank her most sincerely for all her organisation of a memorable day out.

Ballon/Rathoe Community Games has added another name to the long list of competitors that have returned home from the national finals with a gold medal. This week pride of place goes to Edelle Morrissey who beat off all competition to claim gold in the under-12 art competition. Edelle is daughter of Niall and Cora Morrissey, Forge Meadow, Ballon. 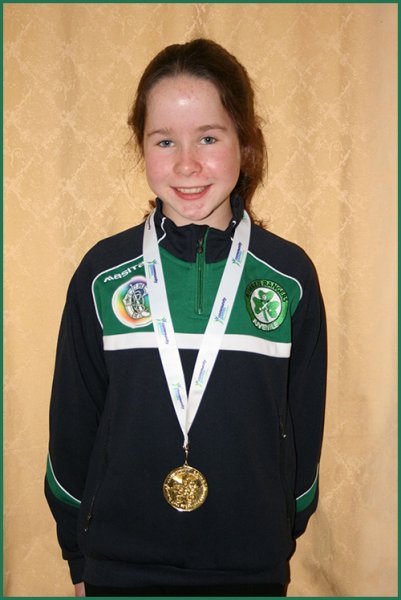 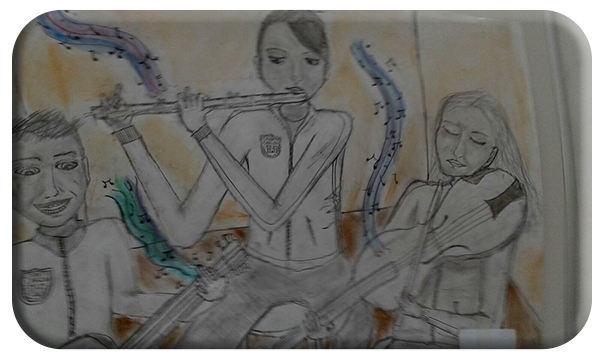 There was success too for Laura Doyle, Ballon Hill and Kathleen Keating, Killane who won bronze in the group singing competition. The girls sang Friendship Song, a song they wrote with their class in Ballon National School as part of a project with Music Generation. They also played their own instruments. 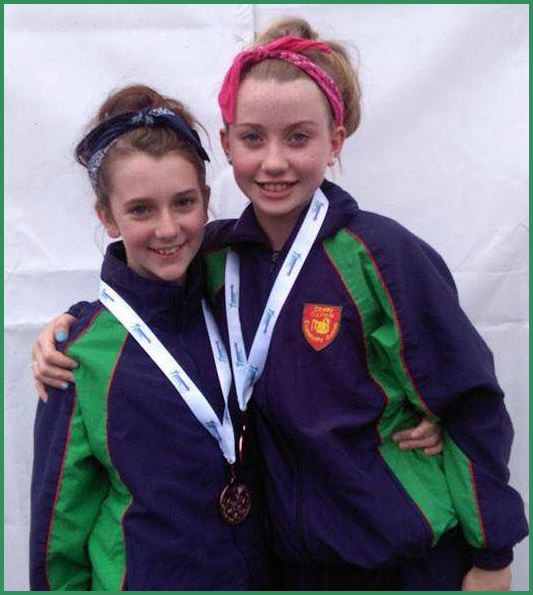 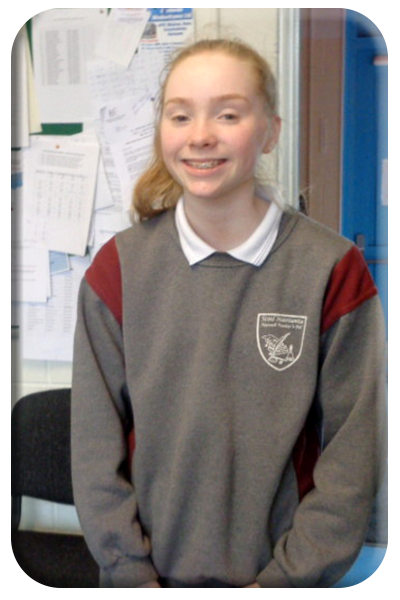 On Sunday 22nd March I went down to the World Irish Dance Championships in the INEC in Killarney.
I danced four dances in total and I  came first in “My trip to the Cottage” and third in “My Invention”.

Ballon/Rathoe entered two teams in the County Carlow Community Games under-14 quiz competition and after a nail-biting ten rounds the teams finished in an unprecedented first and second place. The winning team of Eoghan Murphy, Leanne Carrol, Orla Deacon and Aoibhe Connolly with subs Ruairi Murphy and Roisin Morissey scored 94 marks out of 100 to book their place in the national finals in Athlone in August. The second team members were Ruairi Murphy, Roisin Morrissey, Roisin Connolly, Edelle Morrissey and Leah Walshe and they scored an impressive 91 marks out of 100. The teams were trained by Caroline Byrne and well done to all concerned. 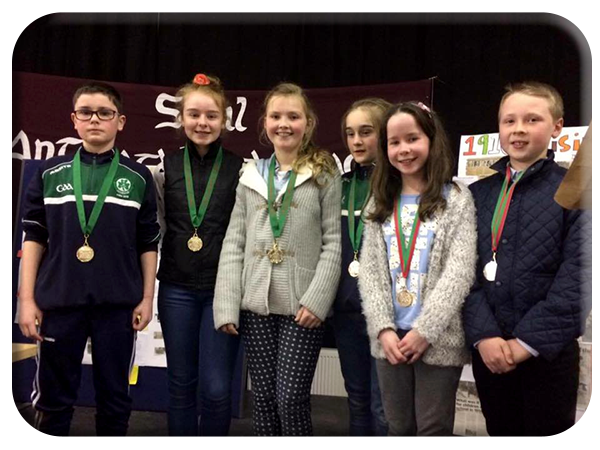 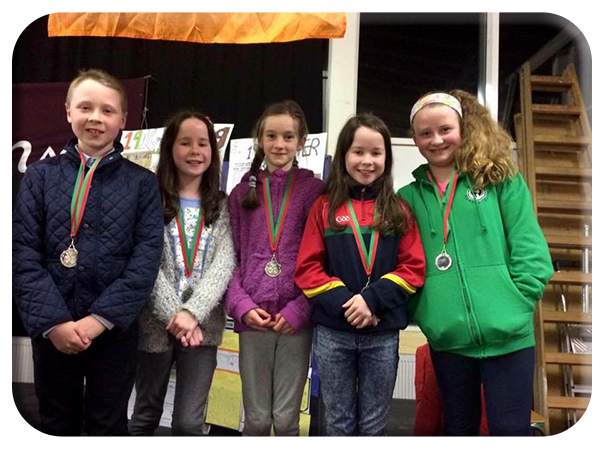 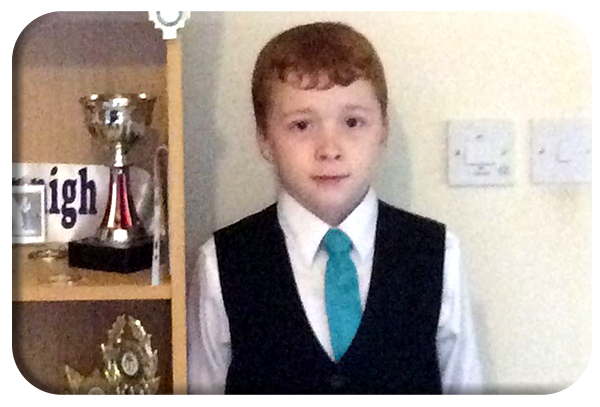 We have featured him  previously recording his many successes both local and national but this time round Paddy O’Reilly from Rathrush, Rathoe has really hit the big time. The 10 year-old Irish dancer won the silver medal in the boys under-11 slip jig competition at the World Irish Dancing championships which were held in the Glen Eagles Hotel, Killarney on Saturday 19 March. With no competition in his own age group Paddy moved up a year and to the great joy and pride of his entire family and friends exceeded all expectations and took the runners-up medal. Paddy is son of Myles and Bridget O’Reilly and is a pupil of the Emily Kirwan Dance Academy. Paddy has had a meteoric rise to the top having only taken up dancing in December 2013.

The Ballon area did very well at the Bagenalstown Municipal Districts first ever Cathaoirleach’s Reception which was held in Ballinkillen Hall last week. Six individuals and groups who had excelled in 2015 on both the national and international stage were honoured and there amongst them were two from Ballon. They were the Ballon Active Retirement Group’s short mat bowls team (Tom Kealy, Pat Abbey, Tom Nolan and Seamus Byrne) winners of the All Ireland competition and Cuchulainn Rounders Club winners of the All Ireland minor girls (Aisha Mullins, Ladine Fisher, Laurna Hutton, Megan Brennan, Chloe Hutton, Caithlin Doyle, Katie Brennan and Aine Holden) and minor mixed (Joe Holden, Adam Booth, Warren Cooney, Nathan Fitzgerald, Jack Dunphy, Caithlin Doyle, Katie Brennan, Megan Brennan and Chloe Hutton) titles. The winning individuals and groups each received a specially commissioned vase which was presented by municipal district cathaoirleach, cllr Denis Foley.

Well done to the Ballon National school under-13 quiz team on winning the Carlow section of the Credit Union National Schools Quiz in Askea on Friday 29 January. The successful quartet of Orla Deacon, Leanne Carroll, Ruairí Murphy and Aoibhe Connolly now go forward to the regional finals which will be held in Kilkenny. The under-11 team of Róisín Morrissey, Isabella O’Byrne, Kate Murphy and Edel Morrissey also did well in their competition but failed to progress to the next round. 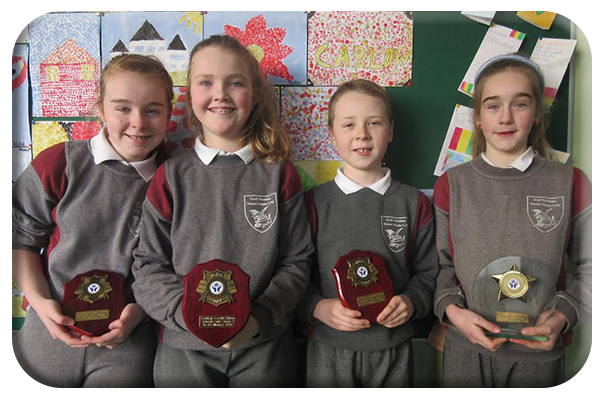 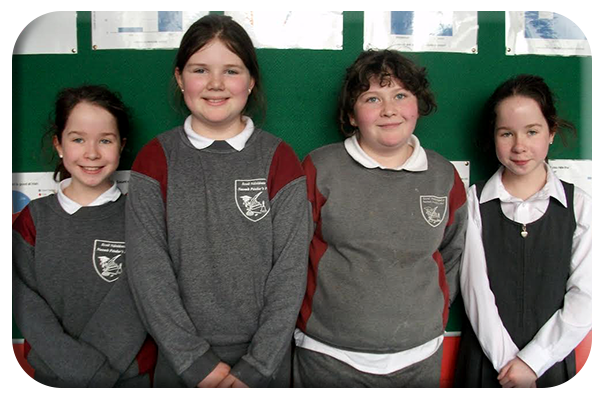