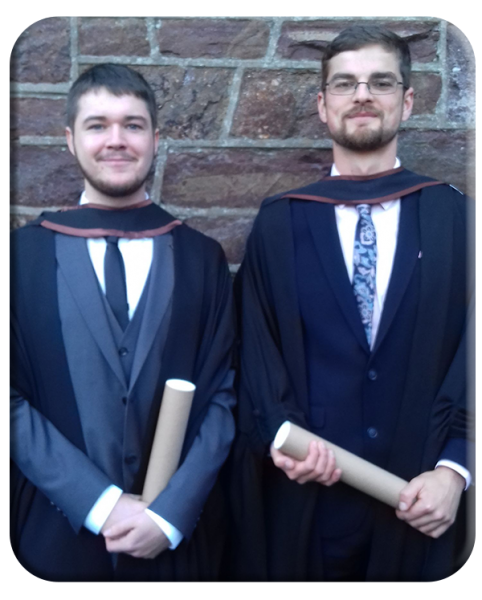 Pictured are John Mullins, son of Bernie and John Mullins, Ballykealey and Sean Whelan, son of Rose and John Whelan, Chapel Street, Ballon who recently were conferred with BA honours degree in Music from Waterford IT.

I Dreamed a Dream

Local lady Bernadette Maher achieved a long cherished dream to hold an exhibition of her work in Carlow Library.

The title of her work is “An Alternative Dimension” where she skilfully melds her photographs with a line of poetry. She edits the images to change the colours to suit the mood of her work and it lends itself to the Alternative Dimension. The pictures are all her own and mostly taken locally with Altamont Gardens and Mount Leinster being prominent locations. Full marks for her entrepreneurial approach to an imaginative display. 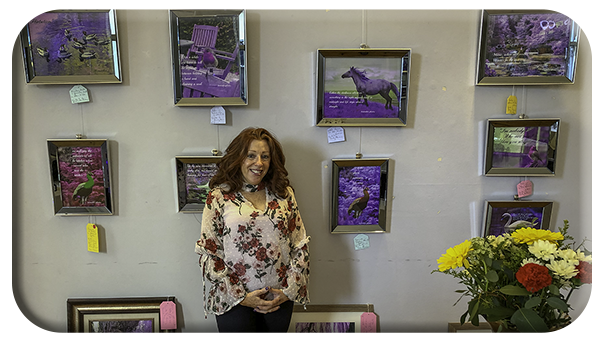 Yesterday, 16/11/18) in Ballon ns the Parents Association presented headmaster Mr Heffernan and deputy Head Mrs Mullins with a cheque for €23,000 the profits from our fundraising extravaganza “Who wants to be a thousandaire “ in April which saw us raise funds to complete a new play area at the back of the school to improve the outdoor facilities for the kids and reduce winter muck and dirt being brought into the school…the work has now been completed and payment has been made.. 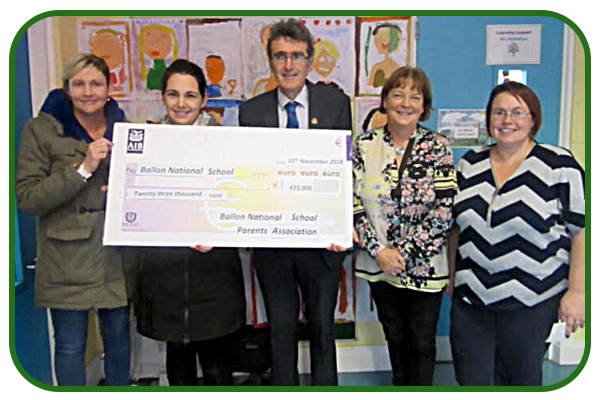 For most of us running a marathon would be, to say the least, difficult. Cycling from Ballon to Dublin and home again, unthinkable. Doing both the same day, well, totally out of the question. But not so for Michael Moloney, Rathrush who did just that on Sunday 28 October.

Michael set off from his home at 3.15am that morning and rendezvoused with a group of colleagues from Paulie’s Boot Camp in Carlow to undertake the 80K cycle to Dublin arriving there at about 7.15am. Two hours later he donned his running shoes and completed the 42K Dublin City marathon in a time of 4 hours 30 minutes. At around 4pm the group set off again on the bicycles for the return journey and Michael arrived home tired but happy at 8pm after completing 202K. All in a day’s work! The group did the cycle and run to raise funds for Callie Kavanagh a beautiful seven-year-old girl from Carlow who was diagnosed with a rare form of cancer in May

The Village received over a thousand euro in prize  money in total. 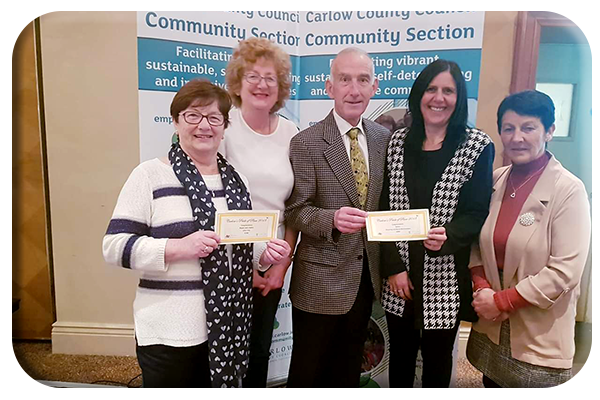 Ballon scooped four awards in this year’s Carlow Pride of Place competition, the results of which were announced at a function held Mount Wolseley Hotel on Wednesday 24 October. Ballon village, overall winners in 2012 and 2014, was placed second behind Clonegal in the community town and village section population 250 to 750. They won €400 for their endeavours.

Next up was Ballon Hill Estate, which after winning the one of the Cathaoirleach’s awards last year came to the fore this time round by taking the runners-up prize of €300 in the best small housing estate. Six times winners, Maple Lawn were back in the frame but this time getting a special award, a cheque for €200, for being litter free. The big award this year came in the category for recycling and waste minimization where the village was awarded first prize and a cheque for €300

Altogether the Ballon delegation at the prize giving ceremony returned home €1,200 better off and we can rest assured that it will all be ploughed back into village improvements in 2019. Overall it’s just reward for a hard-working Ballon Improvement Group and a handful of individuals who keep the village neat and clean all year round and not just in preparation for one competition or another. 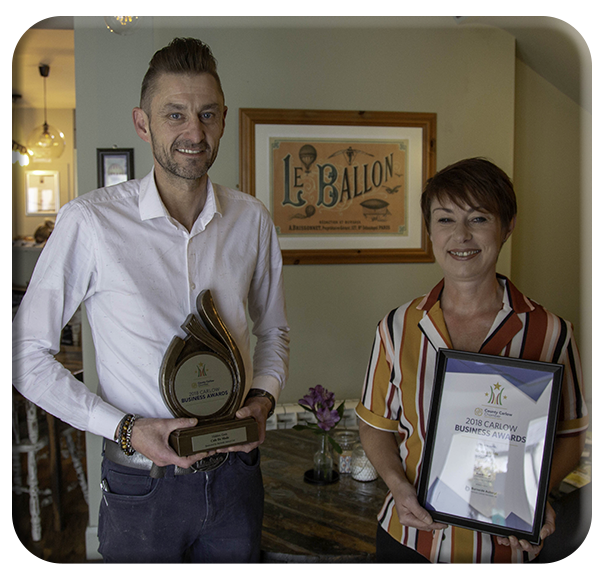 Ballon’s Café de Mode was selected as ‘Carlow’s hidden gem’ at the Carlow Chamber Business Awards held in the George Bernard Shaw Theatre, Visual on Friday 28 September. It’s not the first time the café, opened by Dave and Miriam Lloyd in December 2016, has won an award. In March 2017, four months after opening it scooped the title of Leinster’s best café at the Restaurant Association of Ireland regional finals. Well done and continued success to Dave and Miriam.
The café, which is a great asset to the village, opens from 9am to 5pm Tuesday to Saturday and from 10am to 4pm on Sundays and Bank Holidays. It is closed on Mondays. 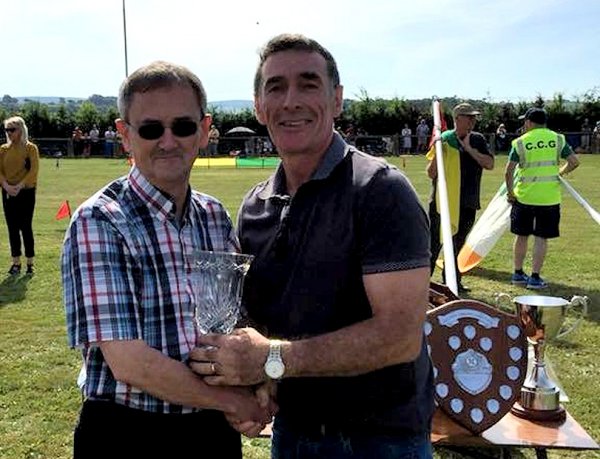 Willie Byrne, Castlegrace was presented with an award on Saturday 23 June 2018 at the County Carlow track and field championship finals for his outstanding contribution to both area and county in Community Games. Willie’s involvement is over a very diverse area but his specialty in in the quiz section where he has trained the Ballon/Rathoe teams to numerous county titles and with the teams then going on to perform very well at national level.  He is pictured here accepting his award from county chairman, Paul Doogue. 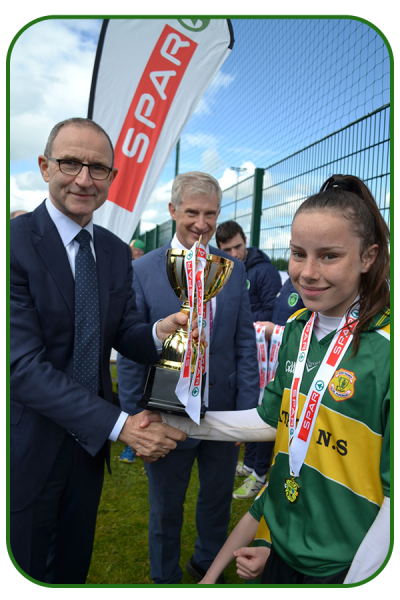 Rathoe National School were last week crowned Spar FAI 5-a-side Girls Leinster Champions at the MDL Grounds in Navan Co. Meath. Having come through the Carlow County finals, they then defeated teams from Wexford and Wicklow in the South Leinsters, before overcoming teams from Dublin, Meath and Kilkenny in the Leinster finals. Irish manager Martin O’Neill was on hand to present them with their cup and medals. The girls will now proudly represent both Rathoe and Leinster on Wednesday 30 May at the Aviva Stadium when they take on teams from the other three provinces. Pupils from Rathoe will be travelling in numbers on the day for the event and anyone wishing to attend can purchase tickets on the day at the stadium (€5 per adult).  Well done to the girls on this incredible achievement. Squad: Ciara Kelly, Genevieve Sherlock, Lorna O Shea, Aoife Smithers, Ella Meyler and Aoife Kelly.

Eddie (Ned) Kelly has been the popular postman in the Ballon area for more than twenty years so when he appeared on RTE’s Winning Streak on Saturday 21 April he carried the best wishes of the community. There was genuine delight in the area when Ned walked away with prizes worth €33K in total including a Toyota Corolla worth €25K. Ned, from Ballyhackett, Tullow, bought his lucky ticket in McAssey’s Supermarket in Ballon.

EVA AND MATTY MAKE THE GRADE 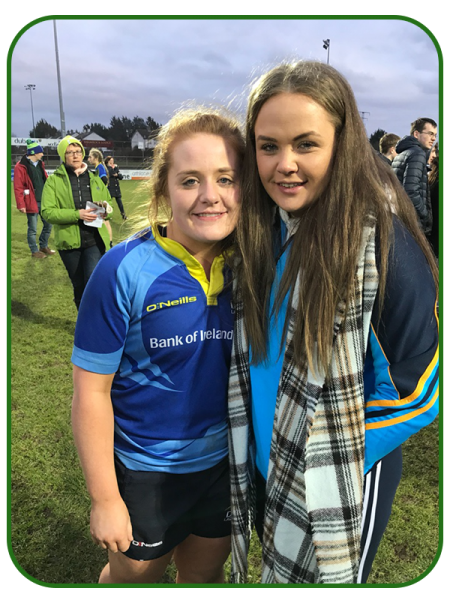 Eva Kealy, Closh, Ballon was a pivotal member of the DCU team which contested the Women’s Rugby Division 1 College final on Wednesday 21 March in Buccaneers RFC in Athlone. Unfortunately, her side lost out to UL (University College Limerick) in a closely contested final which was a powerful demonstration of Women’s Rugby.Eva has been playing rugby with Tullow RFC since she was U15 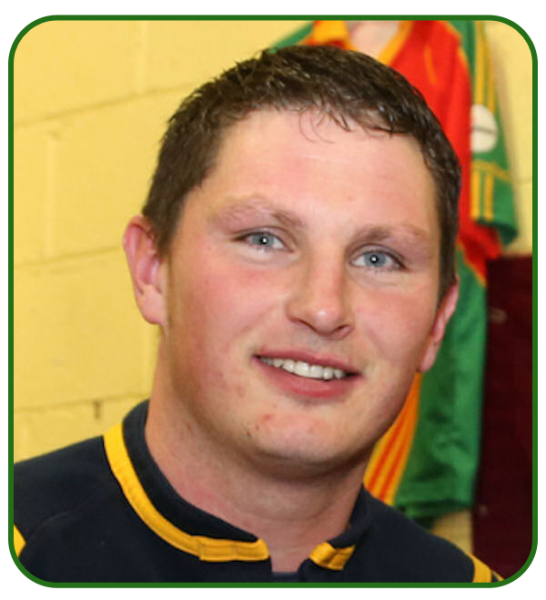 Meanwhile Cuchulainn Rounders Club player Matty Dowling  was on the Leinster panel in the Inter-Provincial championship on Sunday 25 March in Athlone where Leinster became champions for 2018. 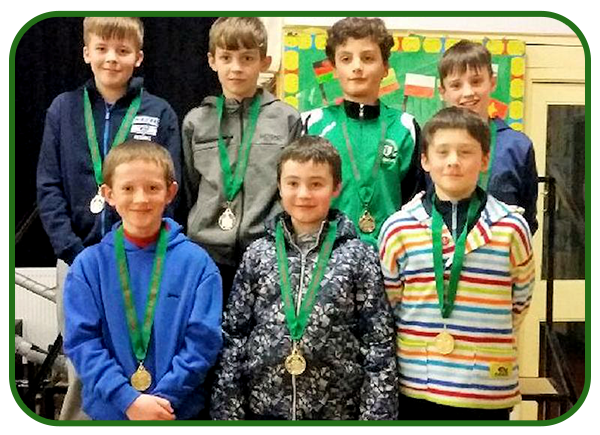 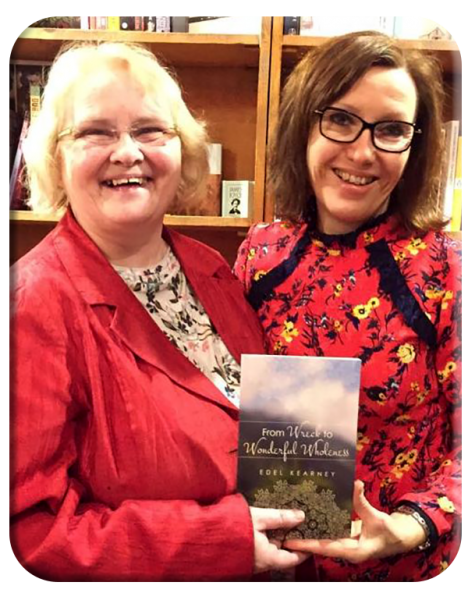 Edel Kearney, Raheen-Killane, Ballon has published her first spiritual self-help book ‘From Wreck to Wonderful Wholeness’. In the book Edel shares her inspirational personal journey, detailing how she over-came her demons and found fulfilment, happiness and wholeness by harnessing the energies of mind, body and especially soul. Edel is an alumnus of Carlow College, and has an MA in Applied Christian Spirituality from Dublin City University and currently lives in Lourdes, France.  Published in the US by Resource Publications, copies of her book can currently be purchased on-line at Amazon.com and from Eason’s Book shop, Fair Green Shopping Centre, Carlow. Our picture shows Edel (right) with fellow author Bernadette Flanagan, at the launch of ‘From Wreck to Wonderful Wholeness’, in the Winding Stair bookshop, Dublin on 6 January.