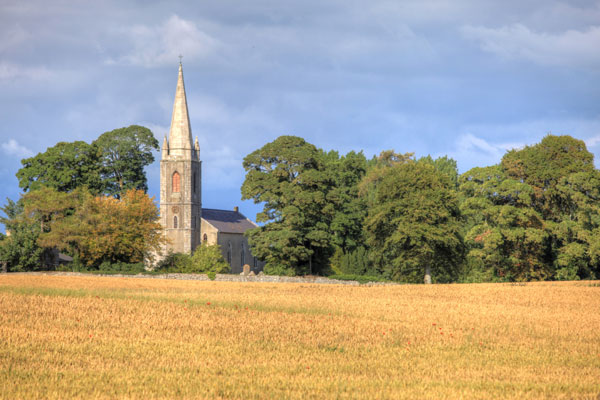 Aghade is undoubtedly one of the beauty spots of Ireland. Before the invention of bridges Aghade was, as the name indicates, a ‘Ford’ or crossing place of the river Slaney. In early times a very important road or rather ‘Pass’ from Dublin to Wexford ran through Baltinglasss, Tullow and Enniscorthy. Hence Aghade must have been a much frequented place.

The name of this parish is not of ecclesiastical origin though it is of great and celebrated antiquity as we read from what is known as ‘The Book of Ballymote’. There it is told how Eochaidh, the son of Enna Cennsealach, killed the poet Niall of the Nine Hostages. The High-King pursued him into Leinster, laid waste the province and forced the Leinstermen to surrender Eochaidh to him. He then carried off his prisoners to ‘Ath Fadhat’ on the banks of the Slaney and there he left him with a chain around his neck secured to a stone. As Niall retreated northward, nine of his champions returned to put an end to Eochaidh. When the latter saw them coming the ‘legend’ has it that he put forth all his strength, gave a sudden jerk by which he broke the chain and seizing an iron bar to which it was secured, attacked and slew his champions. Encouraged by this feat the Leinstermen rallied, attacked Niall’s army, defeated it and pursued it as far as Tullow slaughtering the retreating troops all the way. In modern times, human bones and skeletons as well as mangled pieces of swords and other military equipment have been dug up from Aghade to Tullow. Nothing can be more certain that a bloody conflict took place here at a remote period.

Christian origins of Aghade and All Saints.
In the fifth century Saint Iserninus, Saint Patrick’s nephew, resided in and was buried at Aghade. It is argued that Iserninus in close consultation with St. Patrick founded the church here.
From the ‘The Carlow O.S. Letters’ we learn that an abbey for nuns of the Order of St. Augustine was founded by Dermot McMorogh, King of Leinster, in 1151. He appointed it to be a sub abbey of the nunnery of St. Mary de Hoggis in Dublin. It appears that in the reign of Henry V! (1422 – 1461) 60 acres of land in Ardristian as well as the rectory of Aghade belonged to this Abbey or rather to the head house of that order in Dublin city. The present day church occupies the same site of the former convent.

Quoting from the O.S. letters we read ‘There is now no vistage or remembrance of the abbey now at Aghade but there are a blessed (holy) well, without a name, and a very old baptismal font near the present church which is sufficient indication of a religious establishment of other character having formally occupied the same situation’.
In bygone days, bound by the fetters of superstition, very few people went went to a funeral in Aghade graveyard without paying a visit to the well and taking a drink from it as the water was believed to have curative properties.
The church hall was the parochial National School until its closure in 1967.

With permission of the Rev. Lester Scott 11/01

On Sunday 25th March a Lenten Service was held in the Church. Below are seven minutes of video clips of the event.

On Sunday 29th July a service for Family and blessing of Pets was held.

Welcome We worship this Sunday with all the creatures we love. We join the Psalmists and rejoice with all living things. We sing with all the birds and animals that make our lives richer because of their presence. 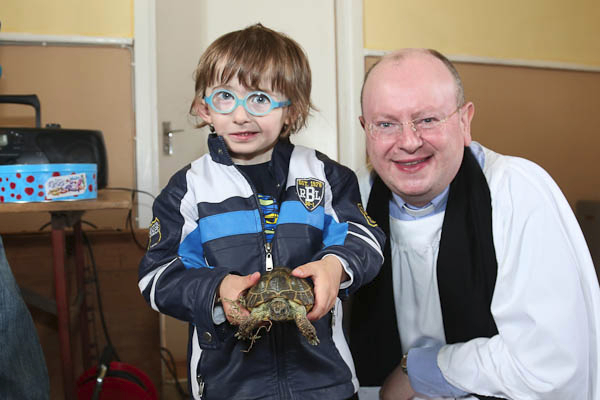 Ewan Morris with ‘Lucky’ the tortoise and Rev. Lester Scott

I have had the privilege of serving in the ministry of the Church in this locality for over sixteen years. As a Rector within the Church of Ireland and as a past pupil of the Christian Brothers, I have come to appreciate the closeness and unity that really exists and has always  existed between my own Catholic denomination  and our sister, Roman Catholic, denomination. For many years now, I have come to realise that interest in traditional forms of worship is fast disappearing with a resulting question mark hanging over the viability of our church doors remaining open into the future, if the present Status Quo continues.

A couple of years ago in my own parochial group, I felt in consultation with my parishioners, that something had to evolve to help alter this trend. A pattern of worship which could happily co-exist alongside the traditional modus operandi, still by and large cherished by older generations. The result has been a series of Children`s & Youth Worship Services aimed primarily at young families and children, but as I have come to realise, enjoyed by the whole spectrum of age profiles. These services are short, lively, full of fun and celebrate the Christian Faith as a family coming together as one and in the one place. This, let`s face it, is becoming an ever increasing rarity in the modern cultural changes of our time, with the integrity of the family unit being continually undermined. The focus of the design format I put into each service is an emphasis on congregational singing, action songs for the children and a funny, humourous talk for the children with an underlying Gospel message. I use as a means of communication, each and any object that serves the purpose at hand. So for example, today as I write, on 26th February, 2012, I used a shopping trolley and the next service in Aghade on Easter Day at 11.15 a.m. will feature the use of Puppetry as an object lesson for the children!

My dream is to continue to grow this ministry. The local church of Ireland community here has only circa 100 households and yet the Children`s Service today realised a congregation today of over 90 souls. Need I say more? My dream is to grow this ministry in a way that encapsultes all the local people of God into a common purpose and worship that need never step on the proverbial sensitivities of denominational doctrine and seeks to bring an Phobail De together as one Christian community – together in faith, together in hope and together in love and witness to our ever evolving societal change.

I should like to ask you to pray for my dream to become a reality, not just as it has become for my parish, but for Christian Unity endeavours too.

I really felt the Lord`s presence in our worship at All Saints`, Aghade, this morning and I feel Him prompting me to say with the Psalmist, ” Let us rejoice in the day the Lord has made and let us be glad in it”. Let us rejoice indeed and worship Him..

The one thing I have come to learn about my locality here in these environs over the years, is that there is amazing God-given talent out there amongst us in the entire community. I truly pray that we can avail of this and become a closer family in our one Christian Faith.