by Hope and Francis Morris

When in existence the Ballintemple Estate consisted of about 1000 acres.
Like most estates it had it’s own yard bell which was usually rung by the land steward. Employees had to be there at 8 o’clock every morning to receive their instructions for the day ahead.
The bell was rung again at 1 o’clock for lunch break, 2 o’clock to return to work and finally at 6 o’clock to gladly end another hard day on the farm.

There were usually eight to ten men, in full employment, many of whom had to cycle or walk several miles to and from work. Extra staff were taken on at peak times such as hay-making, harvesting and potato picking.
It was not unusual for women and teenage children to come in for potato picking. Schools often gave a week off in October for the children to help with this chore.

The harvesting took a long time. Firstly the cutting of the corn with a binder followed by the stooking of sheaves. The stookes were left perhaps a week before being put into hand-stacks.
When the corn seemed mature enough the stacks were then drawn by horse and cart to the haggard and put into large ricks. Building a good rick was a very specialised task in which men took great pride.
Later in the autumn some of the threshing took place and this took five or six days.
Neighbours came or sent a man to help and in return some of the Ballintemple men would be sent to help at the threshings on neighbouring farms.

November heralded the beginning of the hunting season. The meet took place at the belfrey gate and was always a colourful scene. Horses and cattle were usually taken into the yard area so they wouldn’t be excited or frightened by the activities of the horses, hounds and horns. Date c. 1941 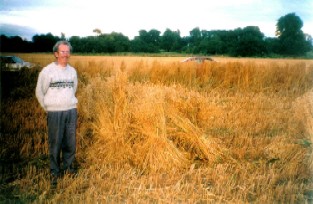 Yes, some of the treshing took place in Autumn. But about February or early March where  another couple of days was to be done. The reason for this was to have fresh seed ready for sowing in the Spring.

(Ed’s note: These are my stooks made at the vintage demo. at Lalor’s farm . Tom McGath said they were good but would be flat in the morning – they were)

Just as today, each season brought it’s own chores – the difference being the number of people employed then in comparison to one machine doing all the work in a few hours now. Would anyone wish the return of those, Days of Yore?

A Brief History by Webguy.

The origin of the the family can be traced to a Norman Lord named Hervey who was created Chief Butler by King Henry 11. At that time the family had huge estates.
The most famous son is Pierce Butler (1744 – 1822) who was a signatory of the American Constitution.
The home was destroyed by an accidental fire in 1917. All that remains today is the pillars forming the entrance.

Taken from The Carlow Gentry by Jimmy O’Toole

All that remains today is the pillars forming the entrance.