Two Ballon players are amongst the winners on the Carlow GAA Sports Awards list for 2014. Grace Fanning, Aghade wins the Ladies Football award for her performances as Ballon won the Carlow intermediate football championship beating St Anne’s of Tullow in the decider.  David Wilson, Maple Lawn was selected as the junior footballer of the year. His performances in defence and as an attacking defender were central to Ballon’s junior championship win and to their extended run in the Leinster Club championship. The awards will be presented on Saturday 17 January in the Lord Bagenal Hotel. 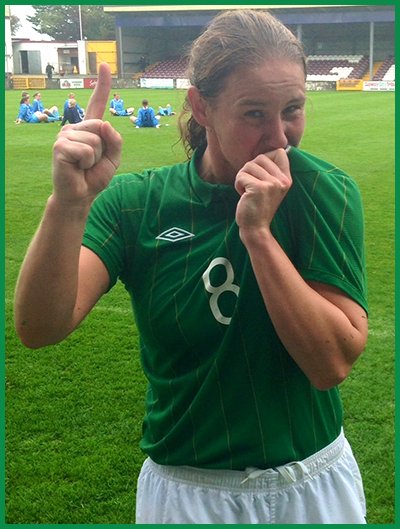 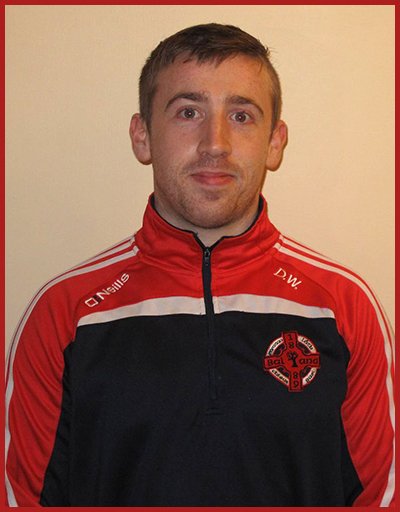 Past pupils Colm Barry, Thomas Murphy, Johnny Brennan and Paddy Abbey show their Silver to the school and give a pep talk including their progress to the Leinster semi finals. 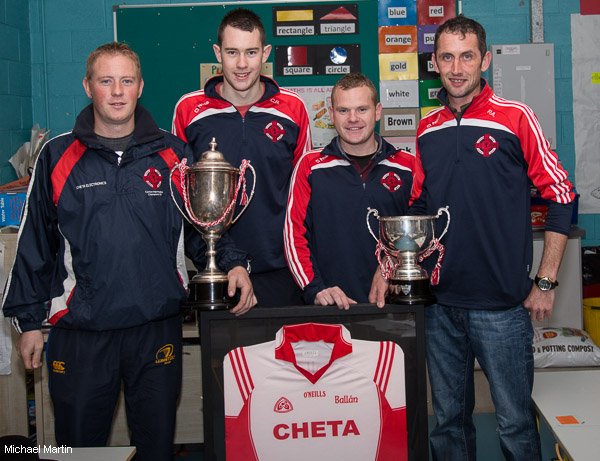 AS IT HAPPENED(From a Ballon perspective) : 5pm in Dr Cullen Park. We’re into the last 15 minutes, playing terribly and 6 points down. It can’t get any worse can it? Yes it can and it does. Benny Fanning has just picked up a red card for a tame enough encounter. Down to 14, no hope now I’m afraid. The lads are trying their best but it’s just not happening. We haven’t raised a flag since the break and Pal have added 2. To confirm our bad form 3 clearances from defense have each found an unmarked Pal player. Now we’re working the ball up the field. We pick up a free about 25 yards out. Mousey O’Leary converts. 2 minutes later it’s Mousey again, this time with a good point from play. 4 points behind now. Not too bad I suppose but still out of reach. We pick up another free around the same place as the last one. Mousey duly obliges. 3 points now. Pal get the ball down the field and score a great point from a free. Damn, back up to 4 points again. I think it’s just not going to be our day! Mousey hits again with a great point from play. Back to 3 points. Yet another point from Mousey and it’s down to 2 points with 2 minutes left. Maybe we can salvage a draw yet. The lads are moving the ball well now and a cross comes in from the far side of the field. Alan Kelly gets his fingers to it and the ball is in the net. Pandemonium. The stand erupts as Ballon take the lead for the 1st time in the match. A point up but will we be able to hold it? Lar Sullivan powers up the middle and kicks a smashing point. Maybe we can! 2 points up. Dessie Nolan picks up a pass under the stand and finds Alan Kelly with a terrific diagonal ball. We’re 2 minutes into injury time now. Alan rounds his man, draws another and finds Frank Fanning unmarked in front of goal. Frank makes no mistake and Ballon are 5 points ahead. Am I dreaming?  A minute later the long whistle goes. I don’t believe it, we’ve done it, we’ve won by 5 points! Unbelievable. What a glorious finish. Fair play to all the lads. They never threw in the towel, played some sparkling football in the last 10 minutes and got just reward in the end. A game we don’t really want to remember, a finish we’ll never forger. Well done Ballon. 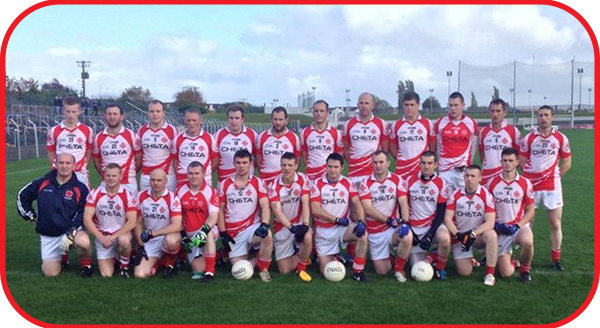 Congratulations to John Kennedy and his wife Katie who were married in Claremorris on Friday .May they have a long and happy life together. Also to Linda Maher and her husband Alan who tied the knot on Friday as well.

Ballon GFC pocketed it’s third piece of silverware this season becoming the inaugural winners of the Joe Moore Perpetual Cup in the Leighlinbridge club tournament. Ballon defeated the home club in the final on a 3-13 to 0-8 scoreline having accounted for Railyard of Kilkenny in the semi. The club’s second team bowed out of the Junior C Championship at the quarter-final stage, paying a strong price for being too much below strength to a very competent Ballinabranna who won by 1-18 to 1-8. Ballon kicks off its Junior A championship challenge this (Tuesday) evening in Hogan Park Fenagh with a difficult opener against favourites St Patrick’s. Kick off at 730pm.

Ballon GFC retained it’s own Morris Perpetual Cup for the 3rd year running with a hard fought victory over a lively Grange team.Grange hit the ground running right from the throw in and Ballon had trouble reaching the pace of the game in the 1st twenty minutes when they trailed Grange 0-4 to 0-1.Ballon did recover though in that last ten minutes and in fact ended the half leading 0-5 to 0-4.If the 1st half of the match was devoid of scores, the 2nd half more than made up for it with the home side regisrering 2-7 to Grange’s 2-6.Ballon’s 1st goal came in the 25th minute after a brilliant move finished off by Shane Broderick and was followed three minutes later with an opportunistic effort from Michael O Leary to put Ballon firmly in the driving seat approaching full time. Grange were having none of it though and clocked up 1-2 in injury time to leave the margin between the sides at two points 2-12 to 2-10 when referee Shamie Doyle blew the long whistle.The Ballon win was somewhat marred though by a serious accidental shoulder injury to Thomas Murphy late in the game.

After the match Ballon chairman Billy Fanning thanked all involved with the tournament and presented the cup to his brother Frank,captain of the Ballon team. 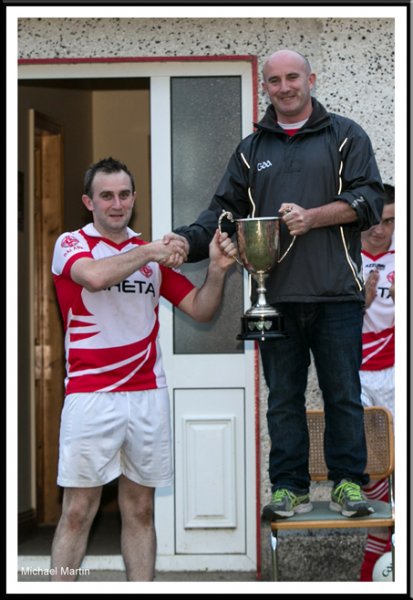 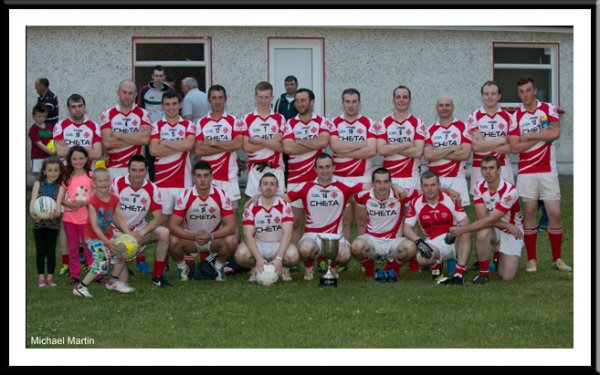 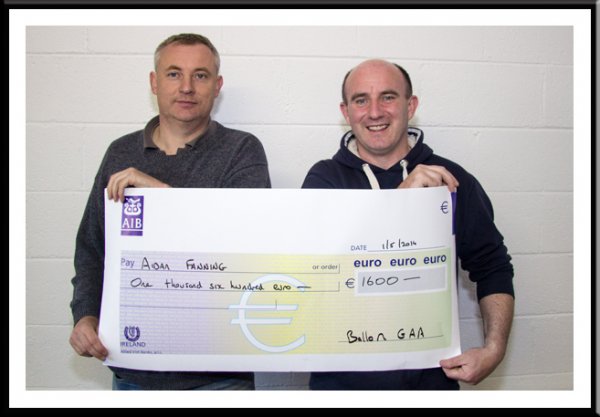 Results:  SFL 5   Clonmore 1-4  Ballon 1-14
SFL 5    Ballon 1-14  Tinryland 1-6
Two wins for the 2nd team since it’s heavy defeat by Naomh Eoin has us back on track for a semi-final spot in Div 5 .Postponements of matches means that the 1st team has now been two weeks without a match.

First defeats of the season for both teams last week.The 2nd team being heavily defeated by a very strong Naomh Eoin(2-15 to 0-10) in the SFL 5 and the 1st team going down almost as heavily to St Patrick’s(2-13 to 1-7) in the SFL 3.Happily though the 2nd team exonerated themselves on Monday evening with a 10 point away win over Clonmore(1-14 to 1-4) to put our SFL 5 challenge back on track.The 1st team are due out again on Thursday next 1st May in St Mullins but this match might not take place.

Result:  Ballon 1-16  Fenagh 3-2
Difficult enough away win over Fenagh in the SFL 5. Three goals conceded put us under a lot of pressure but we racked up 16 points and Shane Broderick’s goal wrapped it up with 4 minutes to go.No fixture for the ist team last week.
15/4/14

Three matches played since last week’s update and all three won convincingly. The 2nd team were responsible for two fine wins in the SFL 5 beating Kilbride (2-11 to 0-4) and Grange (3-15 to 0-2) while an understrength 1st team dispatched Leighlinbridge (3-13 to 2-5) in the first round of the Div 3 League. This team (1st) has a bye in round two so no match this week while the 2nd team are out again on Monday next away to Fenagh in SFL 5 at 7pm.
8/4/14

Great win for the club in the All County League Div 2 final beating St Patrick’s by 1-11 to 3-2.Defeat looked to be on the cards at half-time with the Tullow side leading by a point having scored three goals into the wind and rain.Ballon had only scored 1-5 with the gale force wind behind us.However,playing into the elements after the restart a tremendous performance from all fifteen players saw us dominate in every sector of the field and we notched up six points while restricting St Patrick’s to only two to take the title.Well done to everyone concerned.Meanwhile on Monday evening the club’s second team notched up their second win in the SFL 5 beating Leighlinbridge by 4-15 to 0-8.Noteworthy here was a hat-trick of goals( and two fine points) by Glen Pullen playing in his first match at adult level. 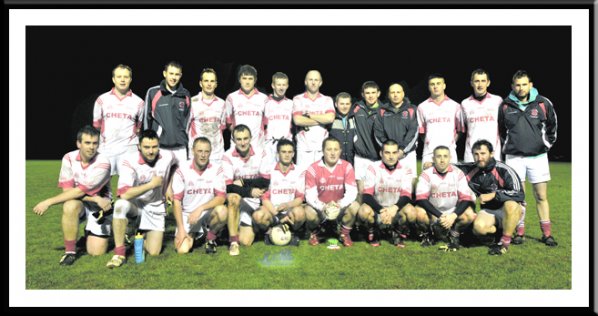 Ballon GFC’s good start to the season continued on Friday evening last at Morris Park with the first team’s despatch of Eire Og by the slenderest of margins in the new All County League competition. After a 1st half when the defence as a whole performed heroically against a rampant Eire Og the home side can count themselves rather fortunate to reach the break with only a three point deficit 0-7 to 0-4.Ballon though, roared into life after the restart and with a superb fifteen man team effort scored 1-3 while restricting the visitors to two points, the second coming only with the last kick of the game.This was a real gritty performance from the Ballon team which sees them into the semi-final of the competition against Old Leighlin and due to be played on Thursday evening next in Old Leighlin,throw in 8pm.Ml O Leary delivered the all important goal having been set up by Hugh Nolan.Frank Fanning contributed two minors from frees while Dan Fanning did similar from play.Thomas Murphy,Shane Byrne and Shane Broderick with a point each completed the scoring for Ballon.The club’s second team will be in action again on Monday evening next with an away fixture to Leighlinbridge in the SFL 5,throw in due for 6.30pm.

Successful start to the season for both 1st and 2nd teams last weekend.On Sunday evening the 2nd team demolished Old Leighlin 2-23 to 0-4 while the following evening the 1st team overcame Leighlinbridge on a scoreline of 0-13 to 2-3.Declan Kealy at corner forward scoring 0-4 and Kevin Doyle at corner back making telling returns to the fray for the 2nd team.Other scorer in chiefs for this team were Luke Brennan (0-7),Michael O Leary (1-5),Shane Broderick (1-1) and Dylan Kirk (0-3) with a point each from P.Abbey, Paul Lyons and John Nolan completing the score sheet.John Murphy didn’t manage to register but had a cracker of a game.
Frank Fanning (0-6) and Shane Broderick (0-3) did most of the damage for the 1st team on Monday with Dan Fanning, Hugh Nolan, Shane Byrne and Karl Nolan all contributing points.Leading 0-6 to 1-2 at half time there was seldom more than a single score between two evenly matched teams but Ballon finished the stronger to register a 4 point win.
The 1st team are out again on Friday next at home to Eire Og in the All County League while the 2nd team have a bye this weekend. 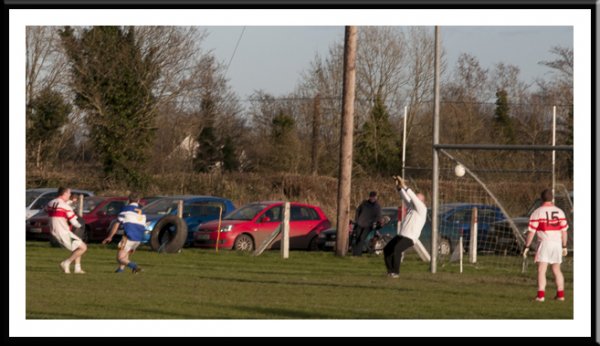 Last night in the club house a presentation was made to the first lotto winner for 2014. 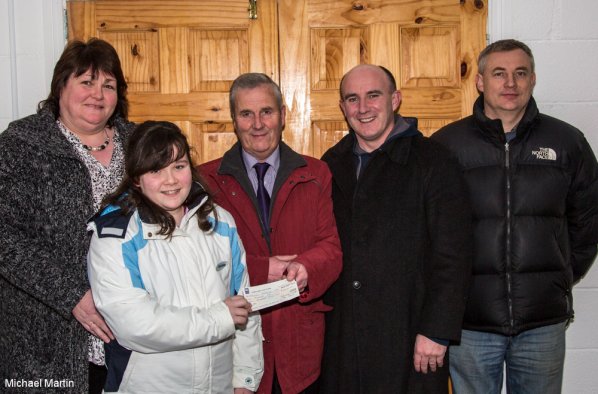 Marian Sullivan with daughter Nora from Myshall receive a cheque for €6400 from ticket seller Billy Nolan.