Results of the 5k turkey trot :

On a beautiful October evening under floodlights in James Morris Park on 16/10, Ballon GFC hosted the Ballon, Tullow, Ballyconnell and Rathvilly schools in a fantastic festival of underage football.
Ballon GFC host this tournament in honour of Martin Swayne and Tim Maher, 2 deceased members of the club but whose memory lives on. Members of the Swayne and Maher families were special guests on the night.
All the teams played each other in the group stages and after some brilliant close matches where all the best skills of gaelic football were showcased and which featured last minute goals, last minute penalties and no shortage of excitement. At the end the calculators were needed to work out the aggregate scores and Rathvilly and Tullow played off for the Martin Swayne cup while Ballon and Ballyconnell played for the Tim Maher shield. Tullow and Ballon emerged as winners after 2 titanic struggles but all 4 teams were a credit to themselves and their respective clubs. After the matches the players, teachers, parents and coaches retired to the clubhouse for some well earned refreshments.
Many thanks to all the hardworking Ballon GFC committee who helped out on the night, and a special mention to Dinny Maher who was the main organiser. Also to Colm Barry and Dan O’Conner for doing a fantastic job refereeing the games, good to see the club has someone able to referee successfully!!
We are looking forward to 2016 already. 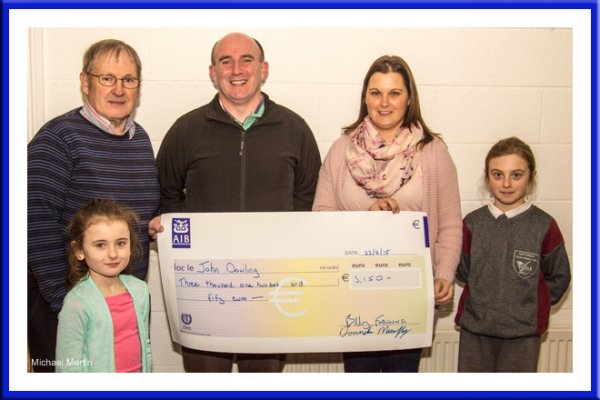 John Dowling of Ballon Hill receives his cheque from seller Carmel Malone of the Rounders Club.

Ballon GAA celebrated in style at Ballykealy House Hotel on Saturday evening last when both the ladies and lads teams were presented with their medals on winning their respective championships last season. Mrs Kathleen Mullins, chairperson of the Carlow Ladies Football Board presented the victorious ladies squad with their Intermediate C’ship medals while Tommy Murphy, PRO of the Carlow Co. Board did the similiar honours to the lads Junior A F’ball  winning panel.Both clubs also honoured their annual award winners, all of which met with great approval and enthuaistic response, with the most popular being the ladies award to Pat Doyle Ballon Hill for his outstanding service and the lads Hall Of Fame award to Dick Maher Ballylean, both of which drew standing ovations from the large crowd present. 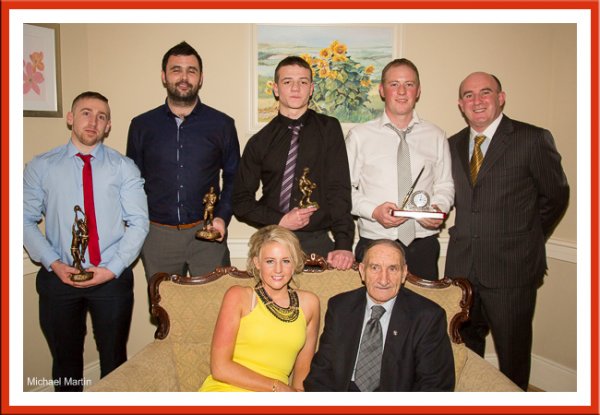 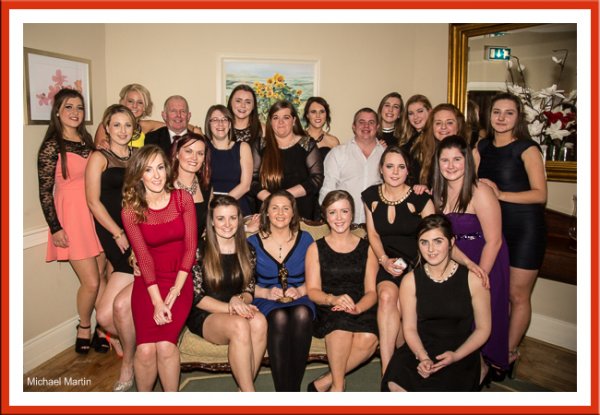