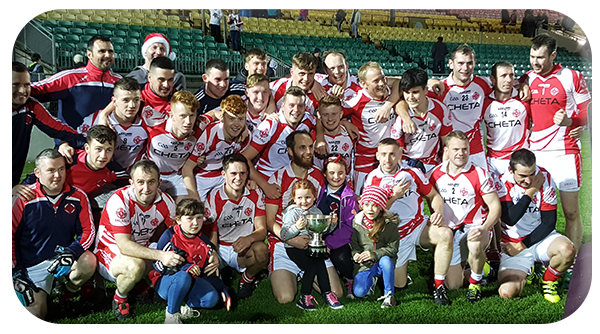 Last Wednesday the 4th of October Ballon and Fenagh met in Dr Cullen park in the final of the 2017 junior A championship. Despite the peculiar timing of the final which had upset both teams, the supporters turned out in their droves for the two teams and the players were glad to have a cool dry night with little wind, lovely footballing conditions.

The Fenagh men after their big semi final win were full of confidence and it showed as they raced out to a 5 points to 1 lead with some fantastic long distance point taking. The Ballon men were hanging on but under the guidance of Kildavin’s Pat Nolan and selectors Tommy Maher and Liam Doyle they weren’t about to panic. Slowly they got to grips around the middle of the field and now, with a steady supply of possession, began to run at the Fenagh defence and cause the men in black and white no end of problems.

2 goals and 3 points were gathered and indeed a third or fourth goal were so close. The score was 2-4 to 5 points when the Ballon men were hit by 2 body blows. First hugely influential midfielder Paddy Byrne went off with a serious shoulder injury followed shortly after by the loss of their best player all year as David Wilson went off, again with a serious shoulder injury. Fenagh took advanatge of the bad fortune to the Ballon team by kicking 4 points in a row to leave a point in it at the half, 2-4 to 9 points.

Turning around only a point down and with whatever wind advantage there was, it seemed to most neutrals in the stand that Fenagh would kick on. Not a bit of it. With the introduction of young blood like Jim Nolan, Joe Holden and Adam Feeney the Ballon men played like men possessed and kicked 1-2 to make the score 3-6 to 9. The goal was a delicious lobbed effort from classy wing back Lar Sullivan and as the game headed into the final stretch the Ballon team and fans started to believe that the huge upset was on.

The final 10 minutes were frantic with Fenagh chasing a goal to bring them back into it and Ballon content to soak up the pressure and keep possession cooly to run down the clock. As referee Brian Deering blew the final whistle there was a huge release of emotion from the Ballon fans as the men in red and white had triumphed on a score of 3-10 to 14 points.

Huge performance by the whole team but special mention to the youth. Jim Nolan was many peoples pick for man of the match. Adam Feeney and Joe Holden also were fantastic when introduced. Colm Barry, Ryan Hollick, Dan O’Conner and Lar Sullivan were super in defence. Glen Pullen was steady as a rock in the middle while Liam Brennan was unmarkable up front.

We musn’t forget the experience of course as Johnny Brennan, Shane Byrne and John Gittens were tigerish in defence. And of course Alan Kelly, Tom Murphy, Michael O’Leary and Frank Fanning showed all their cunning, experience and leadership up front. To think the Ballon team were without the injured James Carroll and talent such as Brendan Fanning, Shane Ryan, Ross Nolan, Conor Kearney and Rory O’Conner (among others) are still to come in then this could be a special few years for this special bunch.

The Fenagh team were devastated but very gracious in defeat. Captain Shane Byrne accepted the cup from neighbour John Blanche and the team and fans went home very very happy.

Roll on the intermediate championship of 2018!

On the pitch and at the school


Youth certainly had it’s fling on Sunday morning last at the Ballon GFC annual fun cycle event with the majority of the participants opting for the less stressful 5K distance and with some apparently anxious to complete the distance as soon as possible. Some of the more mature though did opt for the longer 10K, via Myshall village, but all from both groups arrived safely back to enjoy the ample refreshments. The burgers especially went down a real treat and on a beautiful bright and sunny afternoon all left both happy and contented. 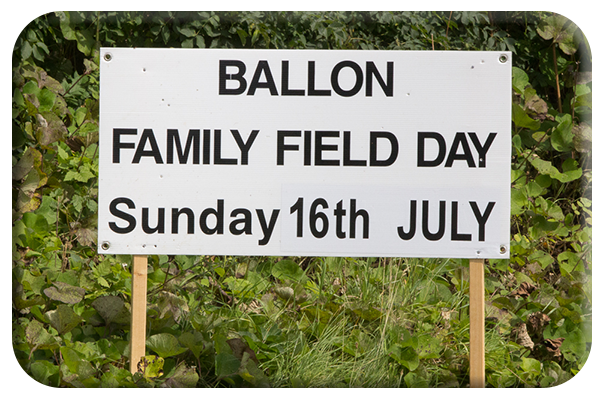 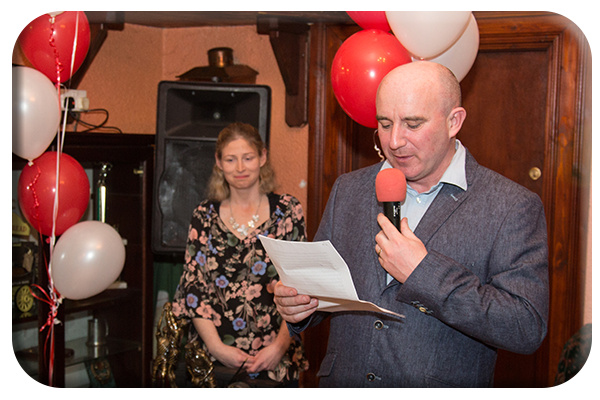 The club’s annual awards night was held in Doyle’s pub on Saturday last. Chairman Billy Fanning opened the proceedings and included in his address some encouraging words to the players of the club’s two teams for the season ahead. Members of the winning SFL 3 team panel of 2016 were presented with their medals by trainer Pat Nolan. The always popular individual awards for the season were also presented. The McGagh family on behalf of the late Chrissie( a dedicated gaa fan) were the sponsors of the Young Player of the Year which was presented by Helen to the very deserving Colm Barry. Doyle’s pub was the sponsor of the Junior B team award and Joe was on hand to present the trophy to popular winner Padraig Lawlor. The Junior A Player of the Year was sponsored by Liam and Margaret Buggy and Liam presented the award to the talented and dedicated John Gittens, another very popular winner. John Kelly was the recipient of the Club Member of the Year and his award was sponsored by Dyson Construction and presented to him by Kevin Doyle. The night continued till late with disco music and was enjoyed by all present. 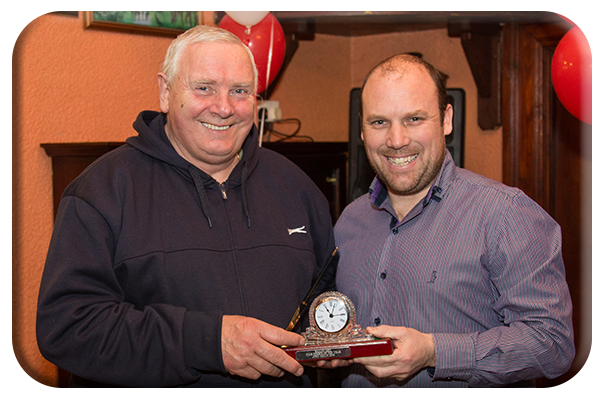 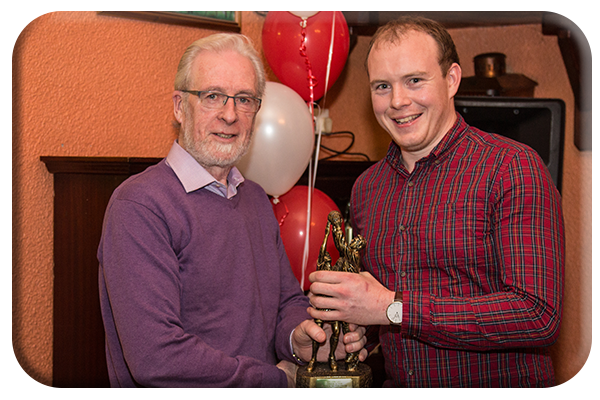 John Gittens – The Junior A Player of the Year

Sponsored by Liam and Margaret Buggy and Liam presented the award 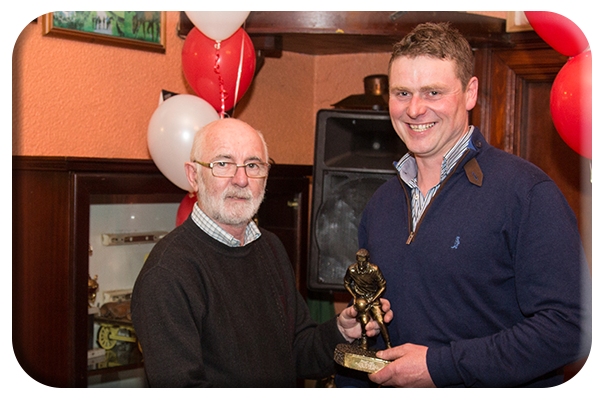 Sponsored by  Doyles Pub with Joe presenting the award 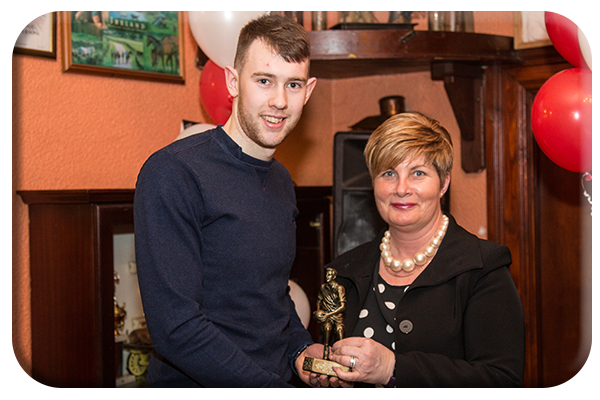 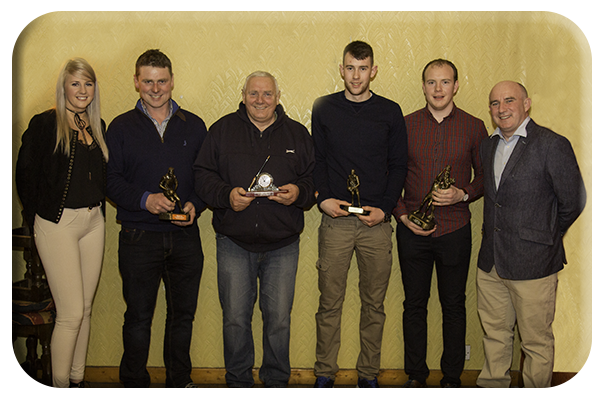 Members of the winning SFL 3 team panel of 2016 were presented with their medals by trainer Pat Nolan.

The Carlow GAA draws for the 2017 championships were made recently and Kilbride and The Fighting Cocks have avoided each other in the group stages of the intermediate grade. Kilbride have been drawn in Group A along with neighbours, Naomh Eoin, Grange and Eire Óg with Naomh Eoin their first opponents, while The Fighting Cocks will operate in Group B along with Clonmore, Kildavin/Clonegal and Ballinabranna, who they will play in their opening fixture. Ballon will play in Group B of the junior A championship along with Palatine, Fenagh and Rathvilly, their opponents in the opening game. In the junior ‘C’ championship for second teams Ballon must play a preliminary round against Clonmore with the winner advancing to meet Kilbride. The Fighting Cocks will play Ballinabranna. Burren Rangers will meet Michael Davitts in the under-21 grade.

A well attended AGM of the Ballon GAA club was held on Friday the 27th of January.
Chairman Billy Fanning opened proceedings with his chairman address followed by Linda Redmonds secretary report. The general feeling was that the club had a decent year results wise. Eire Og were the only team to beat the 1st team although the junior A championship semi final defeat to them was very disappointing. This teams division 3 league final victory was the on field highlight of the year.The 2nd team also had a great run although not fielding in the division 5 league final was the low point of the year.
Treasurer Emma Byrne then presented a detailed financial report where the clubs slowly improving financial position was laid out. Hopefully from 2017 we will be in a position to put some money aside to take on some club development in the near future.
There followed a good 25 minute debate on football structures in the area. Various different points of view were discussed on how to improve football. A working group was formed to meet over the next few months and report back to the committee with a few recommendations on how to proceed.
Officers were then elected with the top table remaining largely the same.
Any other business had some lively debates with issues such as increasing the lotto sales and getting more memberships in being discussed.
Hopefully the passion on display in the board room will be replicated on the field of play come the autumn!