Presentation to Margaret by Billy and Shane 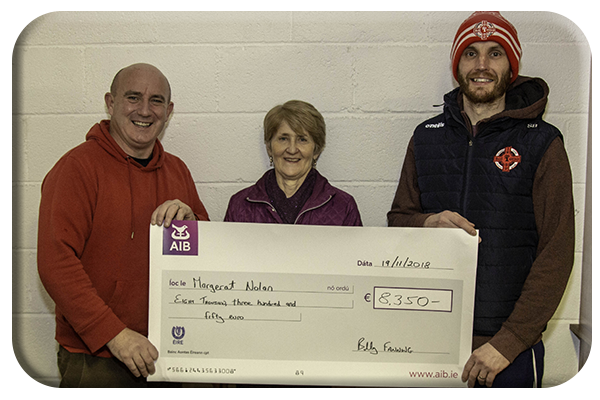 €8350 Lotto Winner
Congratulations to Mrs Margaret Nolan, The Bungalow, Ballon on winning the Ballon Gaa Lotto Jackpot of €8350. Her winning numbers were 6,8,29,30. Ticket sold at NGS Ballon. This is the 2nd jackpot winner sold by NGS.
Ballon GFC
The club wishes to express it’s thanks and appreciation to those who sponsored the races, those who bought horses and to those who attended on the night to make our recent Race Night a very successful event. List of race winners posted in the local shops.

The annual Field Day and Dog Show was held today and after 40 odd days of no rain the clouds leaked. But, it didn’t dampen the spirit and there was a reasonable attendance with something to occcupy everyone. The pictures savour the flavour of the event. I happens to be St Swithin’s day and tradition has it that whatever the weather does today it’ll remain similar for the next forty days. Ugh!

Ballon GFC and Ballon Ladies GFC combined for their annual dinner dance and awards nights on Saturday evening  28th April in Ballykealy Manor House Hotel.
Ballon GFC club chairman Billy Fanning welcomed guests Rev. Scott, Fr O Connell and Joe Doyle of Doyles Bar, club sponsor. A notable absence from the guest list was any representative of Carlow Co Board, though invited. In his address Billy congratulated the club’s Junior A team on it’s great success last year and stressed to the players present that the step up to intermediate level was a challenging one and would have to be met by the required dedication to attendance at training. The chairman also stressed how proud the club was to have fielded a team in the U21 c’ship this year and wished the players the best of luck in the B c’ship semi-final on the following evening against St Andrews. Billy wrapped up his address thanking the hotel management and inviting everyone present to an enjoyable evening.

Ballon Ladies Club chairman Kevin Doyle in his address thanked Ballon GFC for it’s cooperation and for the use of it’s pitches and premises. Kevin congratulated the ladies adult team on achieving it’s first win in the difficult senior level last season. He also paid tribute to the now retired Pat Doyle and Ger O Shea for their dedication to the ladies teams over many years as well as thanking the present team manager Brian Walker for the wonderful work he is putting in at the moment. He wished all well in the future.

The Ballon GFC annual awards then followed and the popular recipiants were as follows; Young player of the year: Ryan Hollick, Junior C player of the year: Conor Kearney, Junior A player of the year: David Wilson. The Clubman of the year award went to the deserving Danny Lewis and Thomas Maher(selector) accepted an award on behalf of the Junior A team management.The medals for this c’ship were then presented to all of the players present.

Excellent music was provided on the night by the Muriel O Connor band and the festivities continued until late.