Due to Friday 13th November being an international weekend our Last Man Standing competition Round 1 will now commence on the weekend of Friday 20th. All entries MUST be in by Thursday 19th. Enter through any Ballon Gfc committee member or by text to 0862119123 with (1) your name (2) mobile no. and (3) your selected premiership team for round 1. Anyone entering by text must provide the €10 entry fee to a committee member before Thursday 19th. Entries will also be taken at the clubhouse from 7-8pm on the following dates; Thursday 5th, Thursday 12th, Monday 16th and Thursday 19th. Last man standing wins €250.

Due to the current Covid lockdown our weekly lotto is currently suspended. However we are now commencing a Last Man Standing competition based on the english premier football league. Full list of the rules follows below and is on the club’s Facebook page Entry is through any of our committee members or by text to 0862119123 by supplying the following (1) Name (2) Mobile no (3) Premiership team for Round 1 (4) €10 once off entry fee. If entering by text the €10 entry fee must be given to any committee member before Thursday 12th Nov. If the fee is not paid, entry won’t be included. Round 1 commences on Sat 14th Nov. Entries/money will also be accepted at the clubhouse on the following dates; Thursday 29th Oct 7-8pm, Thursday 5th Nov 7-8pm, Monday 9th 7-8pm and Thursday 12th 7-8pm. Good luck to all.

After a 20 week absence Ballon GFC’s weekly lotto will return on Tuesday 4th August with a €4200 Jackpot. Tickets at €2 each or 3 for €5 will be available from Friday 24th July. We also extend a warm welcome back to all our annual subscribers.

Ballon GFC are happy to announce that all sanctions(except for social distancing) have now been lifted on the use of it’s walkway in Morris Park. The walkway will now be available all day, 7 days a week until 9.30pm. Users are welcome but reminded to respect social distancing. 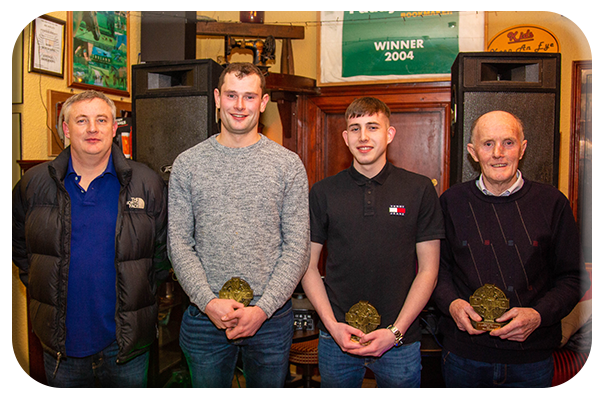