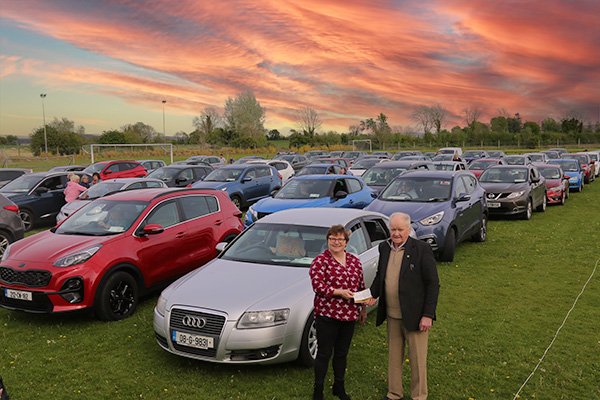 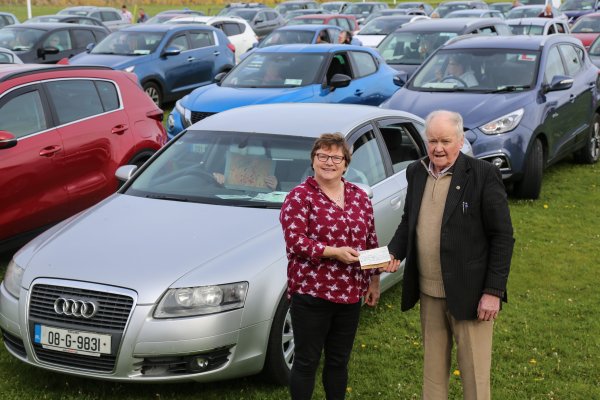 Eileen Kinsella was presented with a cheque for €5,400 by Chairman Dick Fitzgerald on 7/5/22 during the Field Bingo event

At the club’s recent annual general meeting outgoing chairman John Kelly announced a major children’s coaching initiative to commence locally in the 1st week in March. In cooperation with the Leinster Council, Carlow GAA and Ballon National School the club will be employing a Games Promotion Officer(professional coach) to attend at the school for two full days each week promoting and coaching the skills of Gaelic football with both boys and girls attending Ballon school. In addition, the GPO will be available to Ballon GFC on two evenings per week and on Saturday mornings with the aim to introduce the skills and increase the skill levels of both boys and girls from nursery(U-5) levels up to 11-year-olds.

It was the original intention of Ballon GFC that this initiative would come from the St Martin’s juvenile amalgamation and that all juveniles in the area would grow up to be part of one single strong club but unfortunately, the neighbouring clubs didn’t show any great enthusiasm for the project. All boys and girls from U-5 up and their parents will be very welcome to Morris Park in March and all must be registered beforehand. Registration is available immediately, contact Billy at 0872772268 or any of the Ballon club executive members.

There was a generational change at the top of Ballon GFC at a well supported AGM on Saturday.

With covid restrictions eased, the AGM reverted to Fr Flood clubhouse for the first time in 2 years although face masks were still very much in evidence.

Outgoing chairman John Kelly welcomed the large attendance and gave an overview of the year past. It was a measure of the club’s determination and standards that our junior A, junior C and u20 teams all getting to their respective county semi-finals was seen as a disappointing year!

He welcomed Brian O’Neill from Carlow county board who made a great speech and thanked the club for all they do and encouraged even more going forward. Special mention was made of the new Ballon GFC pitch that was drained, levelled, and reseeded during lockdown. Great to see individuals in Carlow County Board coming out to the clubs and fostering a better relationship.

Secretary Teresa Maher then gave a detailed rundown of the past year with the curtailed season from a playing and fundraising point of view stressed. She detailed the club’s addition of a professional Games Promotion Officer to oversee underage coaching in the club going forward and encouraging all members and parents to get involved with the coaching of the young boys and girls and improving standards. Better coaches = better players.

Treasurer Emma Byrne then gave a detailed financial report. How she has steered the club financially through 2 of the toughest years in GAA history was an absolute credit to her dedication and professionalism. She leaves the club in a financially stable position despite fundraising nearly being impossible with Covid restrictions. She’s a miracle-worker!

Election of officers then took place. Pat Doyle was elected as the new club President to universal acclaim. All 3 senior positions were changed with Conor Kearney coming in as chairman, Paddy Byrne taking the secretary role and John Gittens voted in as treasurer. David Wilson takes up the vacant PRO role. Emma Cummins was voted in as assistant secretary and we know she will be a brilliant addition. Teresa Maher was elected as Children’s Officer and John Kelly took on the Designated Liasion Officer. Billy Fanning stays as registrar and Michael O’Toole retook the county board delegate job. Olive O’Byrne will be a brilliant addition as Health and Well Being officer, she certainly has the kids of the area fit and healthy from her work with the athletics club! Linda Redmond took on the role of Irish and Cultural officer and Billy Fanning was elected as juvenile county board delegate. Liam Brennan was elected to the new position of player liaison. A closer relationship between the committee and players will be important going forward.

Other remaining positions as well as selectors on the various teams will be elected at the first committee meeting of 2022.

The motion to amalgamate the committees of Ballon GFC and Ballon ladies GFC was passed and it will be great to pool our people and financial resources going forward for the benefit of all the young people of the area. Standards in ladies football are improving all the time and we will try everything to increase participation rates and enjoyment for all the boys and girls of the area. Any young people who haven’t tried Gaelic football yet will be very welcome to come to James Morris Park and get involved. A great way for new mammies and daddies moving into the area to get to know people as well!

Under any other business, Dinny Maher took to the floor to express his disappointment at the premature ending of talks regarding the formation of a parish club. He acknowledged his club’s efforts in facilitating such discussions and paid particular thanks to those who, while not in favour, but in the best interests of the children in the area stood back to allow the talks to begin. His sentiments were roundly endorsed by the attendees.

New chairman Conor then closed the meeting by paying special tribute to the work that John, Teresa and Emma have done over the past 2 years as we look forward to (hopefully) a full playing schedule for young and old in 2022!!