Ballon Hill has a fascinating history and it’s archeological value should be investigated using modern techniques. This has been expressed to Carlow C.C and a letter has been received indicating that no further development will take place without an archeological survey.

So, in reverse date order: 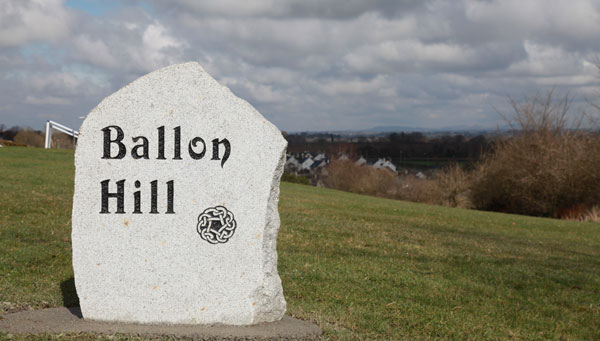 Ballon Hill residents get their own marker stone. And, also, some of the best views of the mountains. 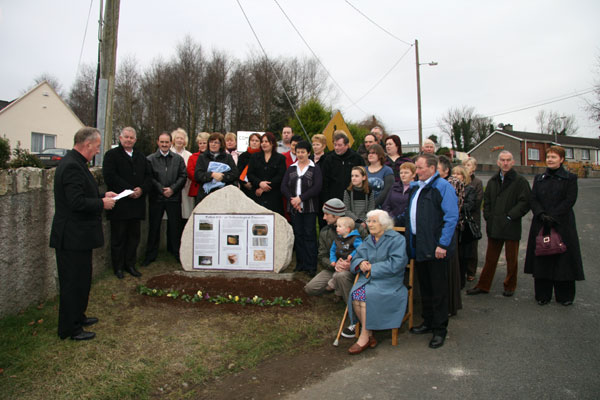 The unveiling of the Heritage Plaque on Ballon Hill by Fr. Howard.

Seated is Nancy Abbey of Ballon hill with her son, grandson and great grandson. 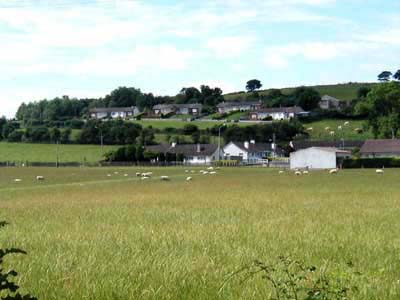 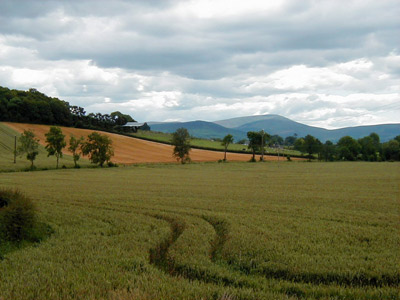 Ballon Hill has a uniform convex shape and is remarkably similar in silhouette from whichever direction it is viewed. Although only 450 feet above sea level it provides a marvelous view of the countryside boasting, it is said, sight of nine counties. Geologically the hill is of granite covered by limestone and then a bearing of yellow sand and earth. As most of the surrounding land is flat it must have been its shape and location that attracted early man to it. It has an intriguing history.

Historians believe that Ballon Hill was the burial place of the King of Ireland, Cathair Mor, in 177AD. It is also believed that the ancient games of mid Leinster were celebrated in the area. The discovery of burial urns in the hill endorses the fact that it was used as a cemetery in ancient times.
In the mid 1800’s the peasants discovered large numbers of fictile vessels over the surface of the hill. (A fictile vessel is one made of earth or clay). They called them “pans and crocks”. At that time trees were being planted and a quarry was being opened so there was a great disturbance of the area.
As a result of these finds Mr. John Lecky of Ballykealey House, the local gentry, commenced a systematic exploration of the hill through his brother in law Mr. Smith. This covered a period 1852 to 1854.
Work started at the “Stone of the Dead” or Cloghan-na-Marbhan as the locals always knew it. This is located on the hill side facing Ballykealey House and stands eight feet above the ground and extending three feet below. 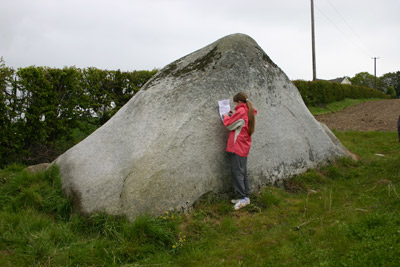 Mr. Smith found it to be supported by granite blocks at each end and found three human skeletons there. Further excavation revealed more granite blocks and these covered a bed of charcoal and different broken urns. Further excavations on the hill, particularly around the rath, produced many more urns some of which were discovered in cists (Burial chambers). Some of the urns were beautifully decorated, some more crudely. The cists had the remains of charcoal and bones of animals and birds. It was concluded that the animal bones were associated with some form of pagan sacrifice.

Mr. Lecky had two of the cists re-erected near to his house and most of the urns where they were restored and housed in the library in the house. They remained there until 1928 when they were presented to the National Museum by Colonel Beauchamp Lecky.

For more information see the book Ballon and Rathoe by Peadar Mac Suibhne.

This vessel was thought to be  a replica of an actual vessel but information recently gathered (2011) that the decoration is imaginative rather than factual and a worthwhile reminder to budding historians that what one learns locally is not necessarily correct.

Suitable pebbles or stones were taken from local drift deposits. These might be greywackle sandstone, schists or granite, as in the case of this bowl. The stones were deliberately crushed and added to the clay as a temper or strengthener. This would give the bowl a better chance of surviving the open pit firing (850 C). This was a common practice in the Bronze and Stone age; and what modern potters might do in similar circumstances.

Further details can be obtained from the book “The Funerary Bowls and Vases of the Irish Bronze Age” by Breandán Riordáin and John Waddell. On sale in the National Museum Bookshop.
Although Ballon Hill was a rich source of these pots there have been similar finds in Liscorran, Co. Armagh; Cumber & Ballydullaghan, Co. Derry; Greenhills, Co. Dublin; and Termon, Co. Cavan.

The following images of actual urns found on Ballon Hill and are Reproduced here by permission of the Royal Society of Antiquaries of Ireland ©
They have been coloured from black and white photos as shown in their journal Vol 2, 1852-3. 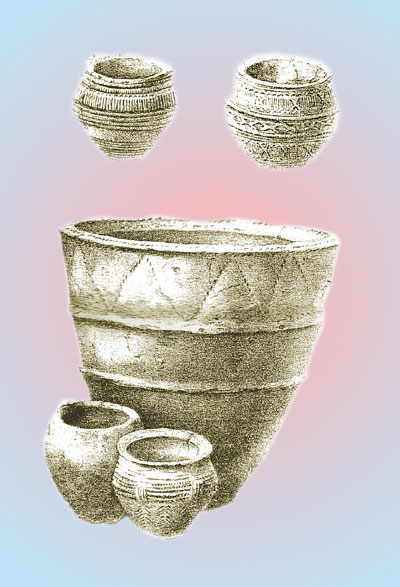 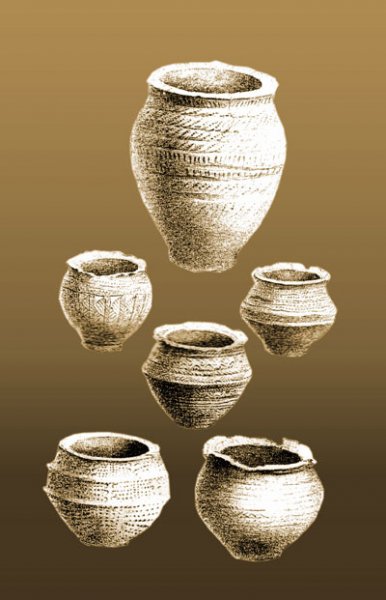 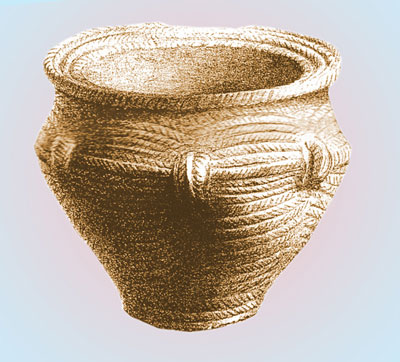 For a more authentic version of the history refer to ‘Ballon Hill and the Lecky Collection’ by Paul O’Neill and The Pagan Cemetary at Ballon Hill, County of Carlow’ by the Rev. James Graves, A.B both of which ae included in the Carloviana 2006 produced by the Carlow Historical and Archaeological Society. (Added 2010)

Appendix posted 5/9/05 and very interesting too.

History of the Grandfather Mountain Highland Games by Donald MacDonald

Highland Games as practiced today were perpetuated by the clans of Northern Scotland but began far earlier among the Celts of Scotia (the name which Latin writers gave to Ireland). Several accounts credit an 11th century Scottish king, Malcolm Canmore, with having started the first Highland Games; but a single hill-race up a mountain in Aberdeenshire can hardly compare with the great variety of athletics which the Celts of Scotia, like the Greeks at Olympia, enjoyed for many generations.

Ancient traditions insist that the same kind of contests in running foot-races, leaping, vaulting, wrestling, lifting heavy weights and putting stones (as one sees today) were begun in pre-Christian times. Several localities in both Eire and modern-day Northern Ireland were places that hosted such Games; but the most important ones were those at Teltown, in County Meath, at Emain Macha, near Armagh in Ulster and at Carmain in Leinster.

The first of these, at Teltown, were “funeral games” which honoured the dead foster mother of a half-mortal, half-diety known as Lùgh, the Celtic God of Light. From Lùgh and from nasa, a word meaning Games, comes the modern Gaelic word for August, Lùghnasa, still the traditional month for Highland Games in Scotland. (In fact, the Grandfather Mountain Highland Games actually began in August and were held in Mid-August until 1958, when the date was changed to the second full weekend in July.) According to The Book of Leinster, the Teltown Games continued until the late 1700s. They were briefly revived at Dublin in 1924.

These Celtic peoples, known then as the Scotti, but now as Highland Scots, crossed the North Channel of the Irish Sea in the 4th and 5th centuries and also at the time of St. Columba, who brought Christianity to Scotland in the 6th. They settled on the coast of Argyll, which they called Dal Rìada, after their former home in Antrim. As all immigrants do, they brought with them their skills, their customs, their pastimes. Soon they were staging Games of foot-racing, horse-racing and wrestling every St. Michael’s Day, September 29th. At each of several sites the event was known as the Oda, also spelled Odaigh, believed to be a Norse word, taken into Gaelic.