As 2014 draws to a close Ballon Improvement Group would like to take a moment to thank all of you who have contributed in any way to our community in 2014.

With your help much has been achieved. From Siopa Glas,  Tidy Town and Pride of Place  point of view we have had a most successful year. ‘Siopa Glas’ project  won the top National Award in the first ever EPA Award for Community Groups under the banner of Waste Minimisation. For the second year running we won the County Endeavour Award with a gain of fifteen marks on 2013. At the end of October Ballon was declared overall winner of Co. Carlow in the Pride of Place Competition. This was the icing on the cake for the area as we had previously taken this award in 2012.

None of this would  happen except for the hard work done down through the years since Ballon entered the Tidy Town Competition.  Big results do not come overnight.  It has been a slow process with good forward planning.  The whole community can take a bow.  Ballon is becoming a better and beautiful place to live and do business in.  Our Community Spirit has been’ ignited’ with such things as the New Sports/Community Centre, our excellent Ballon Community Business Service and Siopa Glas.  All shops and businesses in the area have provided much support in many different ways.
We must continue to appreciate our hard working volunteers.  Our Tus Workers have played a huge role in our success and a big thanks to all.  Thanks too to Carlow County Council for  assistance throughout the year.

Our interaction with the local school continues to flourish.
As the school works towards it’s fifth Green Flag we published a Biodiversity Calendar for 2015.

Other Groups/Clubs  in our area  had huge achievments in 2014..  Ballon GAA Club’s huge success in the Leinster Club Championship was tops.  The Ladies had a great year as well.  Congratulations to you all.
And so, a sincere thank you for your support in 2014.

Ballon Improvement Group would like to wish you and yours a safe and restful  Christmas, and all the very best for 2015. Is Feidir linn!

Ps. Keep up to date with the happening around Ballon through Michael Martin and www.ballonvillage.com. and not forgetting our local weekly newletter via Eileen Murphy at Ballon Business Centre and last but not least Michael Dawson for the Nationalist Notes and the Nationalist Newspaper with Chris Fingleton.

A BIG Christmas present to all walkers on the Ballykealey Ring.

See before and after pictures.

Ideal to do with children during holidays. Leftover Christmas recipes 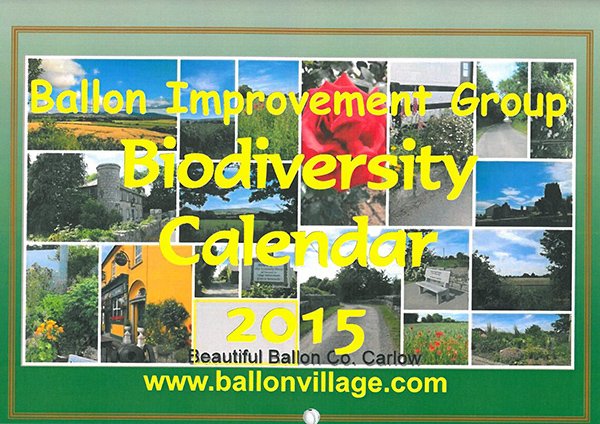 Calendars are on sale in Michael McAssey or  in Ballon Business Service.  Cost €5

December 5th at 6pm our third annual Christmas lights  and Carol singing event took place.
Candlelight procession took place from the Church to the Millennium Garden  and then to the Crib at Siopa Glas.
The moon smiled down on the faces of the young singers of the KHA school choir.  The event was the type that one would wish would never end.   Smiles, Carols, lights, ‘Away in a Manger’ around the new Crib at the Siopa Glas  all truly magical.
The hot Choclate provided by the volunteers at the Siopa Glas went down a treat.
Thanks to all who turned out and a special thanks to  the KHA leaders and the people who provided the music.
PS   Do come and visit the Crib outside Siopa Glas on Main St. Ballon.

Even the Garda Barracks gets a light show 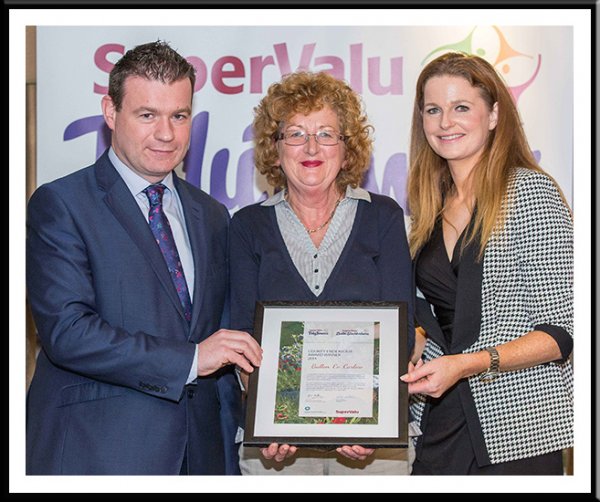 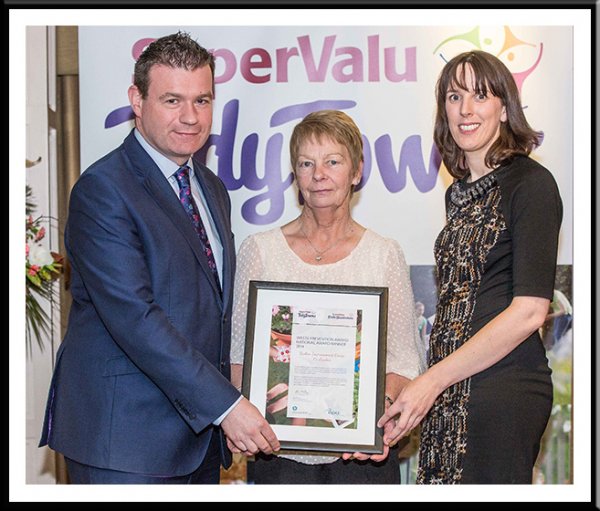 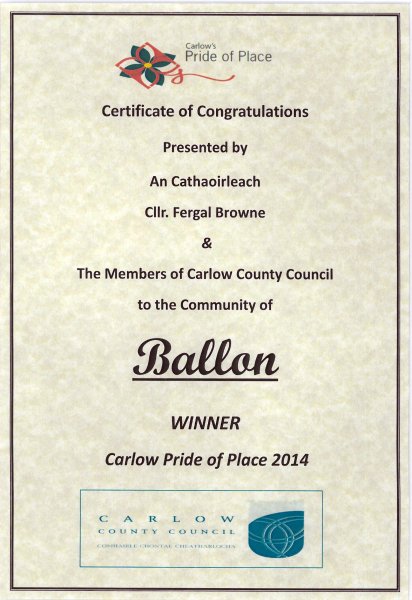 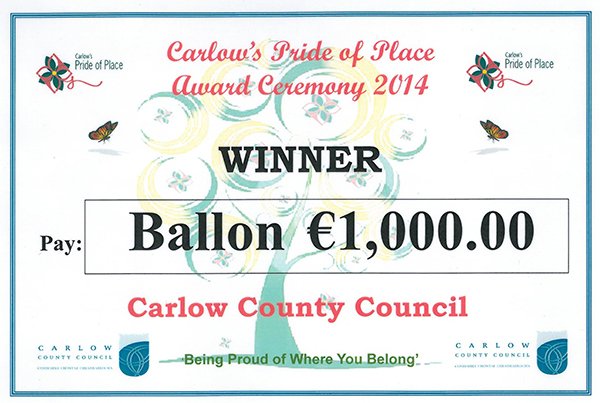 On Wednesday 1st October the Ballon NS 5th and 6th class Green Schools Committee visited Siopa Glas.  The water meters have been turned on today and Siopa Glas and Ballon NS have shown ways to save water and money.  The boys and girls have coloured in pictures to show examples of saving water.  We believe putting in the meter will make us more aware about saving water.
By Jake Somers and Eamon Lalor 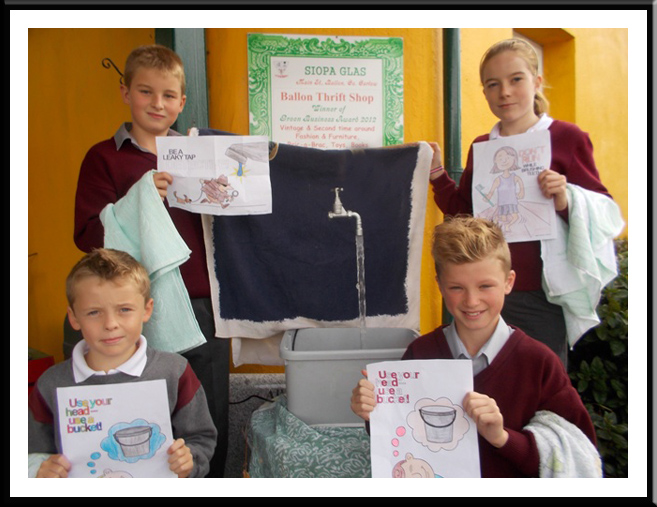 all members of the Ballon National School Green Committee.

Get best value for a range of services – www.bonkers.ie 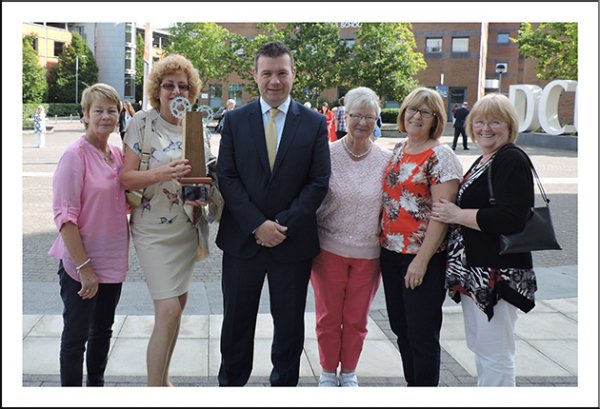 Having received their award

Read the story of the award – Waste to Resource

BIG took another step up the ranks of the Achievers by receiving the Waste Prevention Award at the Tidy Towns Awards at the Helix Theatre in Dublin today.

This is a notable achievement by the Group 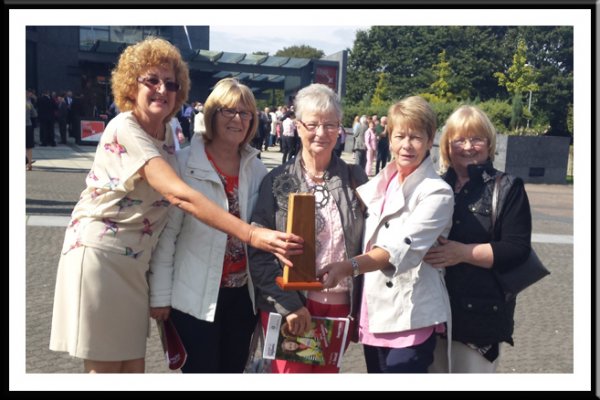 Read the report for Ballon Here

National  Heritage Week 2014  Event by Ballon Improvement Group.
Our aim was to discover the past and build the future.
The third staging of a re-enactment of the 1800’s Hedge School (Scoil Scairte) took place at the Slí na Sceach/Hedgerow Walk, The Forge, Kilbride on Saturday the 23rd August.Seventeen children aged five to twelve took part in the very lively school experience.
The legend has it that small boys were dressed as girls at that time so that the fairies thought that they were all girls! So that is why all the participants were dressed the same.
A badger set with fresh tracks was just one of the signs of the natural environment encountered by the children.   Blackberry picking , walking to the hedge-school barefooted, painting while using their mouths only, writing on old slates, song and dance, prayer and yummy Forge boiled potatoes with bottles of fresh milk were all experienced during the Re-enactment.
Bernie Mullins was the visiting School Master and  told the story of Arthur Mc Murrough Kavanagh of Borris House who was born in 1831. He was born without any arms or legs.  But this did not stop him leading a very full life.
The Cast
Joseph Gibbons, Grainne Kelly, Hannah Kelly, Aoifa Kearns,
Padraig Nolan, Sami Bermingham Salter, Ella Dowling,
Sarah Buckley, Elizabeth Kelly, Eamon Kelly, Orla Kelly,
Ciara Buckley, Charlie Bermingham Salter, John Buckley,
Kate Murphy, Grace Buckley, Diarmuid Nolan.
Production:  Bernie Mullins, Breda Wray, Máire George, Mary Jordan

Thanks to all who took part and helped in any way. Is féidir linn!

These lovely early eating apples, Beauty of Bath, have fruited for the first time in their pride of place positions opposite Forge Meadows in Ballon 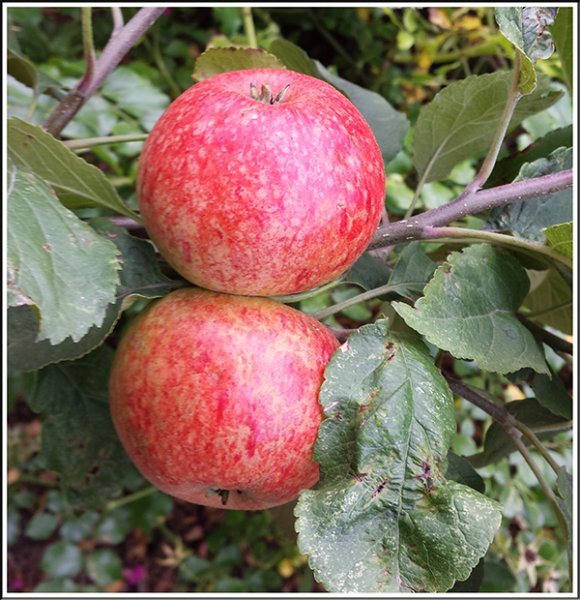 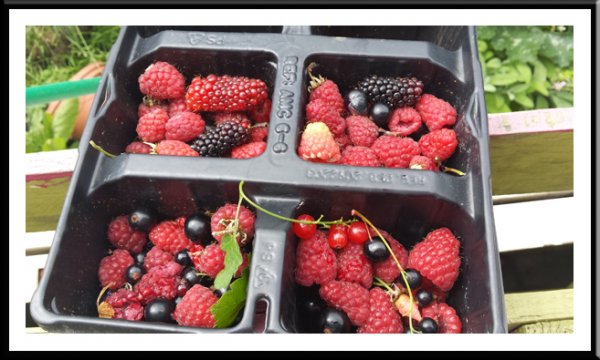 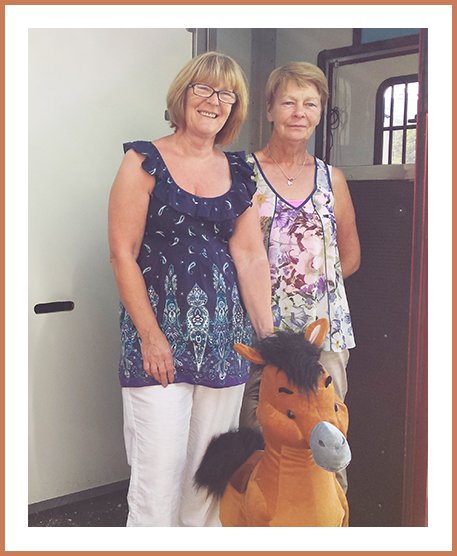 Breda and Marion take delivery of a Horse at Siopa Glas yesterday. Special delivery from Kilcullen! 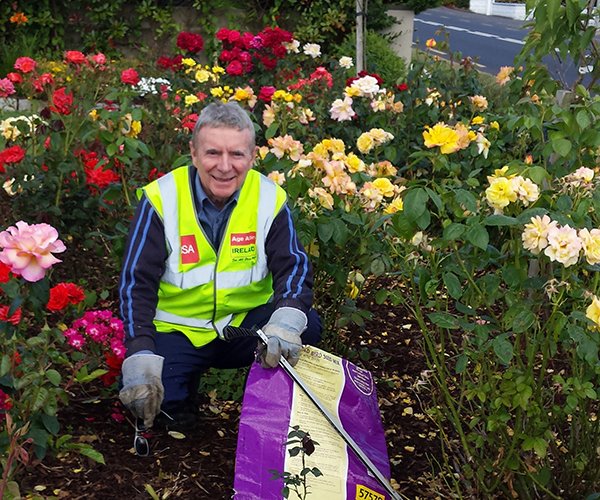 Sixth class are put through their paces at Bicycle Day the 17th June at Ballon School and funded through Carlow County Council and Ballon Improvement Group. 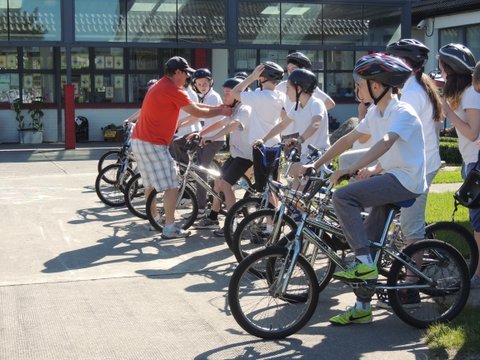 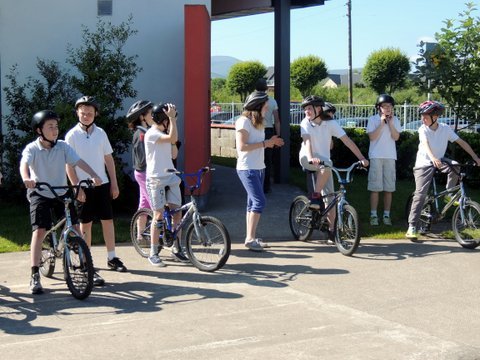 The group had an unscheduled mini workshop on Composting  with Pauline the manager of Altamont Gardens.

Many thanks to the two teachers Helen and Bernie and the children for a fantastic experience. We all felt at one with nature this beautiful sunny afternoon. 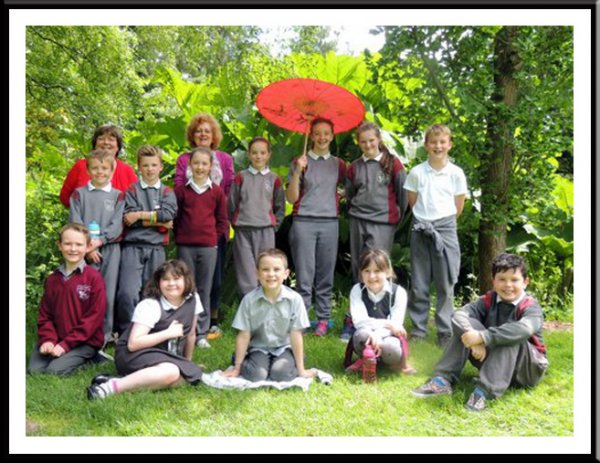 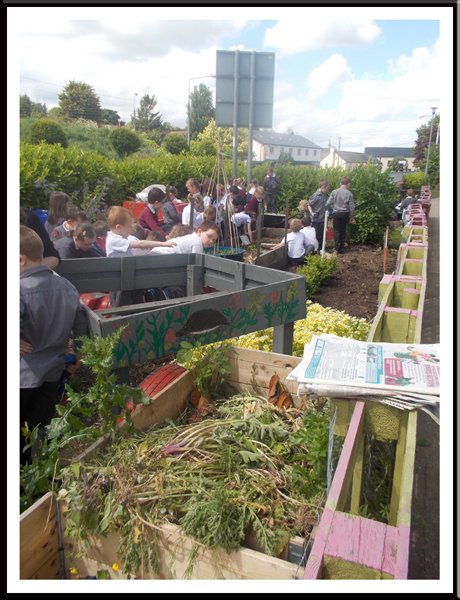 Over fifty people joined in the celebration of the “worlds oldest wake up call” in Altamont Walled Garden on Sunday morning at 4.30am. Renouned  bird lover and botanist  Eanna Ní Lamhna from RTE1 was bean an ti guiding us through the different birdsongs as they filled the air. First came the Blackbird.  Always first! Then the Thrush, followed by a Robin. The Chaffinch did not get left out and his melody was super.  But  we spotted the King of the Birds, the Wren up very close. He too is a singer of note.  Then the true chorus took hold and the sounds were super as the light illuminated our beautiful surroundings.

The magical lanterns that led in the visitors set the scene and one was reluctant to leave and head over to the Forge for the early bird breakfast. Much thanks to the OPW, Robert of Altamont Plant Sales, Rosemarie of the Garden Café, Mary Jordan of the Forge, Ballon Improvement Group and everyone who came along and made our Dawn Chorus at Altamont 2014 a fantastic experience.  Is Feidir linn! 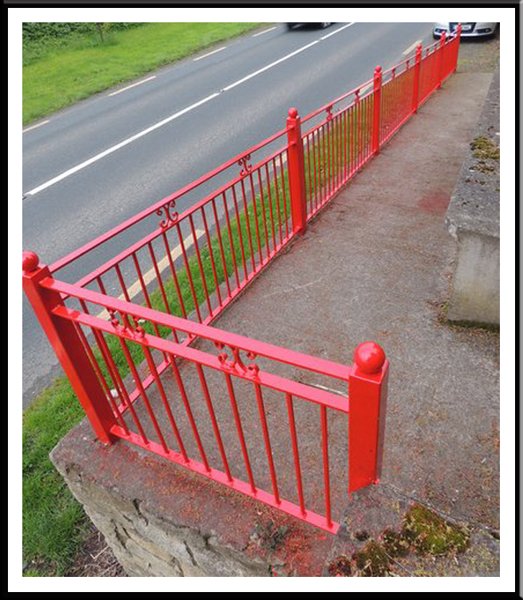 The railings on the ramp to the Lecky/Quaker graveyard repainted. 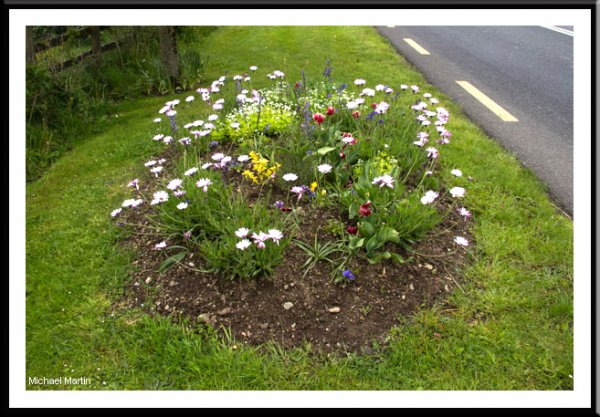 Come join in the following 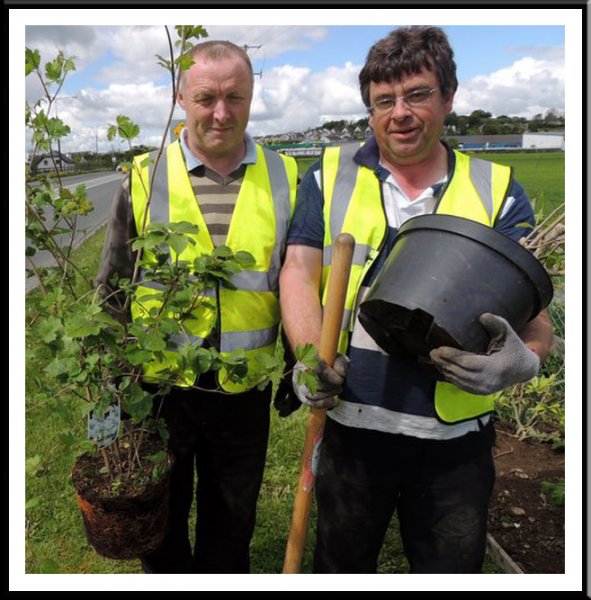 Plants were supplied by Robert of Altamont Plant Sales. 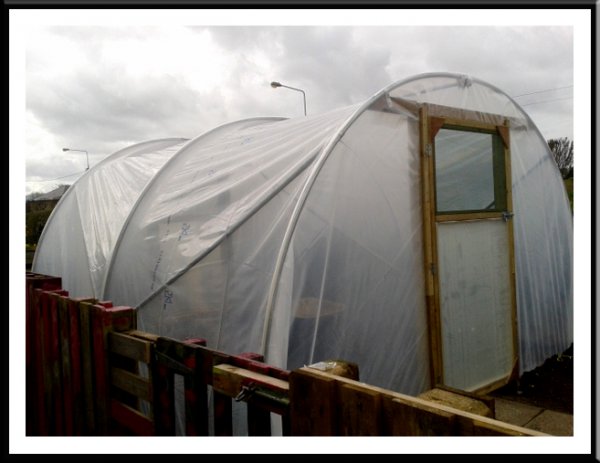 New tunnel for organic school garden.  Funded by agenda 21 through Carlow county council.
Thanks to the school parents who did the installation. 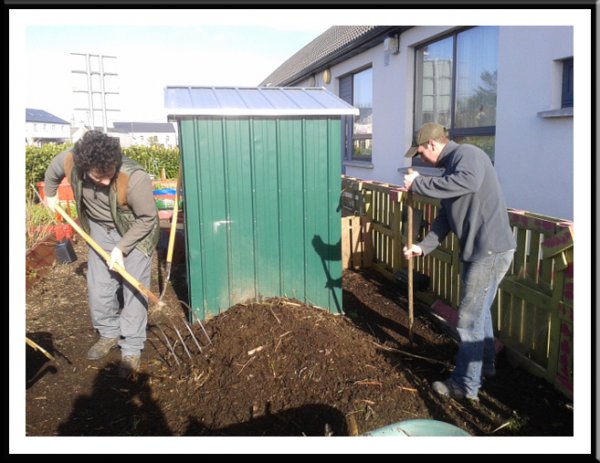 Will and Ian the Ballon Tus workers getting the compost heap turned at the organic school garden. They are preparing the site for new Poly-tunnel which is being funded by Agenda 21 funding through Carlow county council.