3/11/16 Some November pictures in the village by Maire

WON FOUR AWARDS IN PRIDE OF PLACE
Ballon scooped four awards in this year’s Carlow Pride of Place competition the results of which were announced at a function held in the Sevan Oaks Hotel on Thursday 13 October. Ballon village, overall winners in 2012 and 2014, was placed second behind Clonegal in the community town and village section population 250 to 750. They won €400 for their endeavours. Next up was a return to winning ways for Maple Lawn and a cheque for €400 for being adjudged the best small housing estate in the municipal district of Muinebheag. Although not in the competition last year Maple Lawn has won this section on six previous occasions. St Peter and Paul’s School, Ballon, overall winners in 2013, also returned to winning ways by taking the top prize of €300 in the municipal district of Muinebheag and finally Ballon Hill came to the fore when it was awarded one of the Cathaoirleach’s awards and a cheque for €200. Altogether the Ballon delegation at the prize giving ceremony returned home €1,300 better off and we can rest assured that it will all be ploughed back into village improvements in 2017. Overall it’s just reward for a hard-working Ballon Improvement Group and a handful of individuals who keep the village neat and clean all year round and not just in preparation for one competition or another. 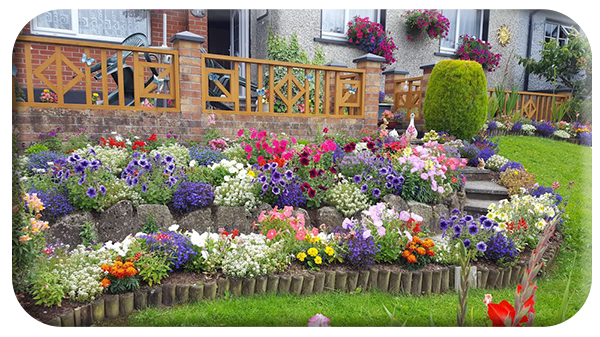 Take a bow Kathleen and Sinead for this striking colour combination

An increase of 12 marks overall and for seven categories

We now have a new group of nature detectives ready to go out into the beautiful diverse countryside that surrounds us.

The Camp took place over four days at Ballon Business Centre, Altamont Gardens and at the Forge.

Ballon Improvement Group and Ballon Business Centre thank all the children that attended and also their parents for bringing them along. The Camp Leaders passed on their love of nature and art and to them all we say “Míle Maith Agaibh.”

Special Event at Ballon National School for Bicycle Week,
On Friday 24th June many of the children brought their Bicycles to school.
Peter from our local Bicycle Shop checked over all the bikes. 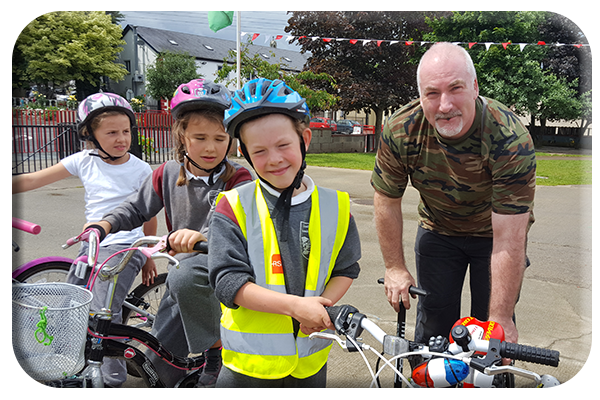 A mini workshop was held.
Peter gave the children many hints and tips on how to keep there Bicycles in tip top shape.
A slow Bicycle race was held and many of the children found out how difficult it is to cycle ever so slowly. 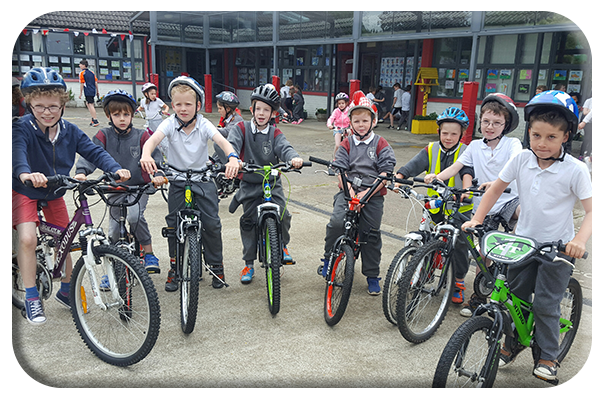 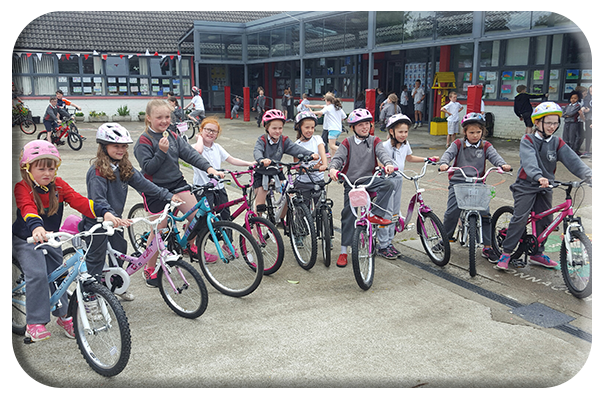 We wish everybody a safe and happy time while cycling over the summer holidays.
If you want to get your Bicycle checked why not bring it along to GP Cycle Shop on Main St. Ballon.   Also the best place to buy a bicycle is local because you have the after sales service on your doorstep.
Thanks to all who took part in our Bicycle event 2016. 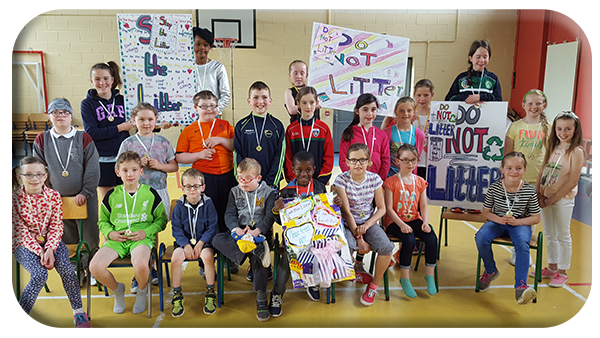 An anti litter poster campaign was held in the school and pictured are the medalists. Many of the posters are now displayed around the village. Please be vigilant in keeping litter in the bins or take it home. There has been a big improvement but litter is still being discarded. These children have got the message.

Two new Tus workers at work in the Woodland garden at the school 12th May 2016.   We welcome Shane and Kenny and hope they will enjoy their placement as environmental workers in the village for next year. 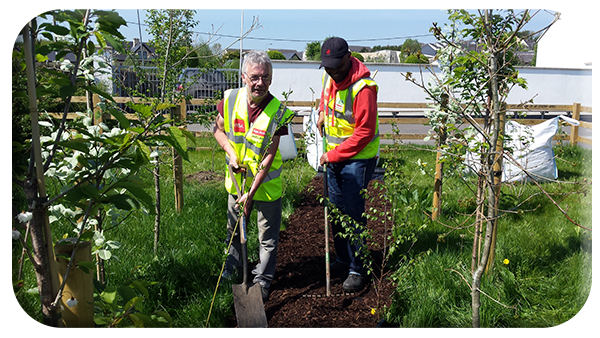 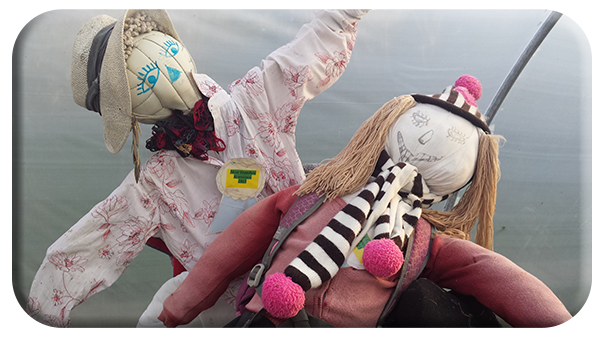 Here are two survivors from last summers  Village Scarecrows.
We are looking for some more fresh Scarecrows for display in the Village this summer.
If you have an idea and would like to help out please contact us. 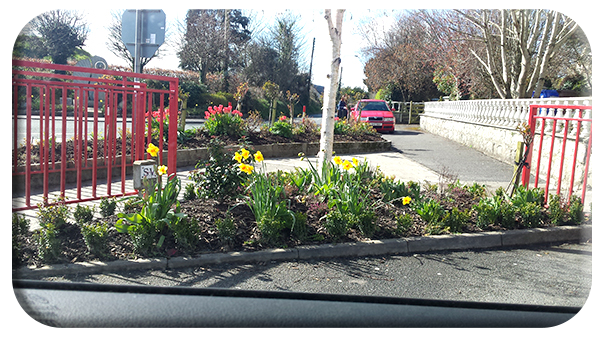 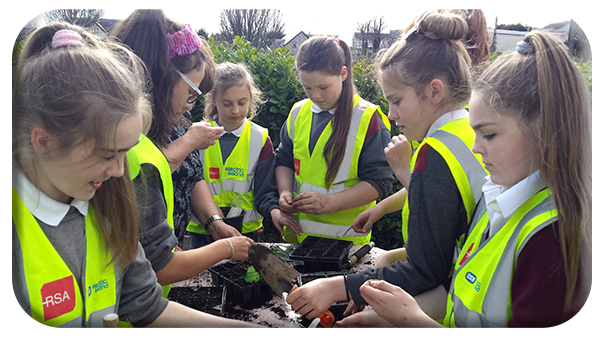 School Garden Club today as  we planted the potatoes etc.

Last night the AGM was held and there was a good attendance. Officers are as noted above. 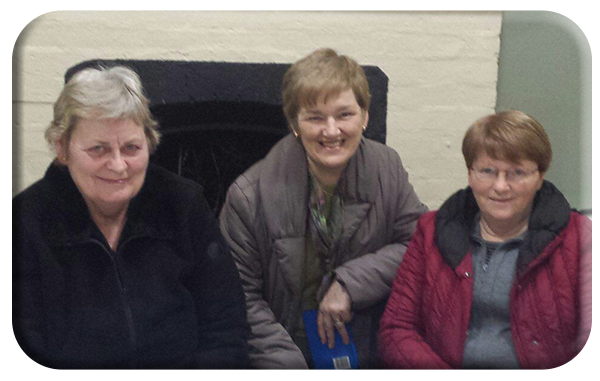