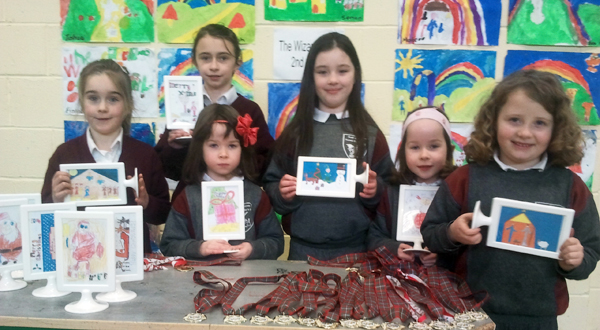 Christmas card designers display the medals to be presented to all the creative artists. 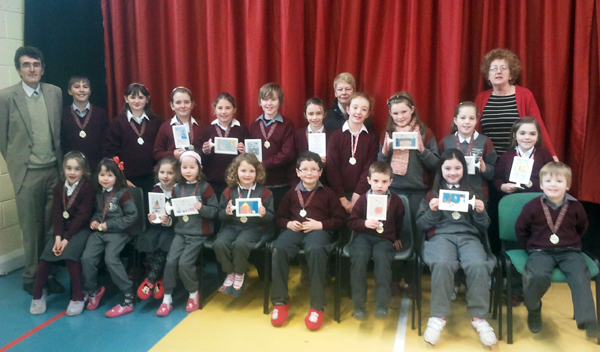 The children were presented with a medal by Breda Wray of BIG shown here with headmaster Noel  Heffernan and BIG chairperson Máire George.

All proceeds go to Vincent de Paul and the KHA mission. Congratulations to all involved. Is feidir linn!

2012 is the European Year of Active Ageing and Solidarity between Generations.
To coincide with this, the European Commission Representation in Ireland organised a photography competition for primary schools.  Pupils were asked to take a photograph on the themes of active ageing and solidarity between generations.
Boys and girls from fifth and sixth class entered the competition.  There was a large number of entries from all over the country.  We had three winners.  There winning photographs will be on a calendar printed by the European Commission.

The three winners were Anna Tracey, David Lalor and Sarah Bermingham.  They attended a ceremony in the European Commission Representation building in Dublin on Wednesday 14th December.  All twelve finalists got certificates and a copy of the calendar.  Well done to all three!

Christmas cards designed by the children are available from BBTS. These are a quality product printed by BBTS as a fund raising activity and encouraging the children to express their artistic talents.

The school this evening held the 1st of its three Christmas concerts and being  the turn of Junior and Senior infants. The gallery show snapshots during the performance. These are to whet the appetite in anticipation of the DVD being prepared by Colm McElroy. So no more pictures as they might detract from the DVD.

Had a look at the Ballon web site today. It was so lovely to see the school backing Teresa Treacy when she was in jail. I had actively campaigned for her release and brought my youngest son Noah Pilkington (who is now in Junior Infants in Ballon)to her farm in Tullamore Co. Offaly soon after she was released and he planted his first tree there, especially for her. A birch. 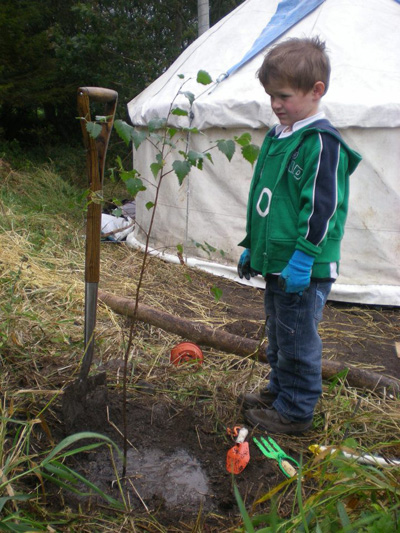 I wasn’t even aware that the school had also planted a tree in her honour. What a lovely gesture. It’s such a great school.
Kind Regards,
Rachel Pilkington

Some children helped to plant a tree for the occasion……..

The planting was also  showing support for Teresa Treacy from Tullamore who went to jail in protest about the compulsory  cutting down of the trees she planted to facilitate the  ESB and Eirgrid power lines.

Children received plaques, medals and certificates for their efforts during the year.

The biggest and most imaginative entires for this competition. Well done children and those behind the scenes.

The Alupro competition is strict in the use of aluminium and the following would not be accepted. However, there is a great amount of imagination shown as well as a lot of hard work, so they have been judged as a separate category.

Dodging the imbriferous sky the Fair went ahead with great support from all creating a social atmosphere that gave a lift to these incompetent times. Well done to all involved and keep positive.

Remember last year when the school was the overall national winner in the Alupro CanIt competition?

This year’s theme was on ‘Space things’ and attracted a large entry. As the sponsors are very strict in the use of aluminium in the models the entries have been divided into those that qualify and to those with great imagination.

The results for the latter will be shown soon.

The following picture shows the children who qualified for the former with their collection of space models. 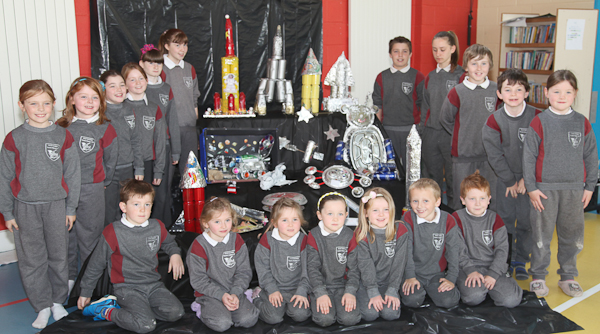 and here is the Gallery of their entries.

On Wednesday 18th May children were encouraged to walk to school if nearby or to ‘Park and Walk’ if further afield.

Here are some of them with mums and dads.

All the school prepare their dancing  for St. Patrick’s Day Parade

On Saturday 5th February, our school choir performed with the ‘Three Tenors’, John Scott, David Martin & Declan Kelly in the George Bernard Shaw Theatre.  In the first half we sang ‘The fields of Athenry’ with the tenors. At the start of the second half we sang two songs – ‘After the Gold Rush’ and ‘Lean on me’ by ourselves. All the teachers were at the performance. The conductor of the choir was Rose Whelan and her son Séan played the guitar. The organiser is one our of teachers Anne McMahon. 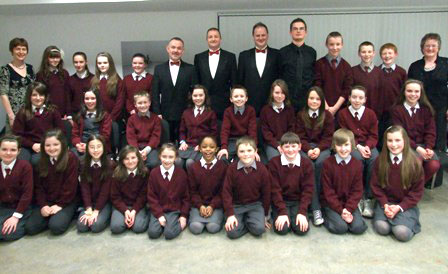 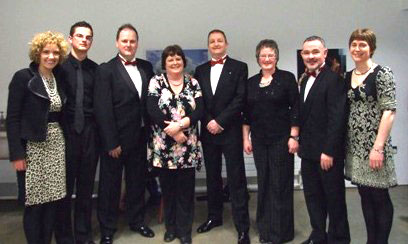 We all really enjoyed the show, it was so exciting. The children would like to thank Ms McMahon, Rose & Séan for giving up the time and all the work they put in getting ready for the show.
By Caoimhe O’Brien & Orla Kenny.

The KHA committee performed some very successful fundraising during the Christmas period. They sang as a Christmas Choir at several venues in the village and Carlow town raising funds for two wothy causes. The local cause was SVP Tullow branch and the other was the village in Kenya where they have sent generous funds for many years.

All this under the baton of teacher Bernie Mullins and with support from all the other school staff and the children with their parents.

Pictured are KHA committee with headmaster Noel Heffernan.
Seated at the front are Frances Fitzgerald of SVP and Chairperson Bridog Kelly.

The cheque is for €1000 and a similar amount was sent to Kenya.

See what the Kenya Nuns said via the school blog.

Frances said that the demands on the SVP have increased considerably and this amount will be a real help to the Society.