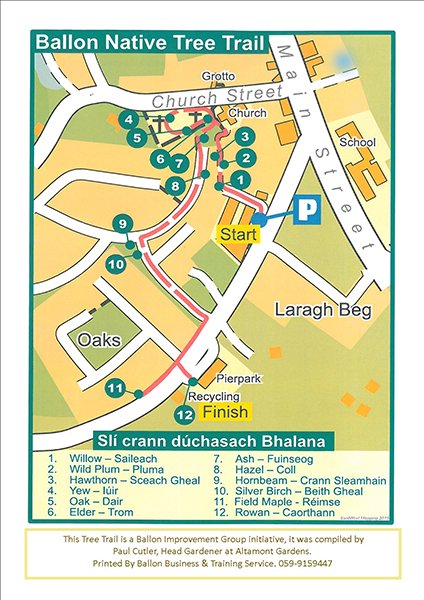 Click on the link below for the full size and you can print it.

By following this short tree trail through Ballon Village you will pass by twelve Irish Trees, which are each numbered and labelled with their names. Although it is more usual to plant ornamental tree varieties in village centres and housing estates, native trees will attract more native birds and insects, and so increase the biodiversity within the village. Notice that some of the common trees that you will pass have not been included, such as Beech, Lime and Sycamore. This is because these are not native, but were introduced into Ireland by man hundreds of years ago, and have since become naturalised. This trail has been developed as a follow-on project after the success of the Sli-na-Sceach walk at the Forge Restaurant, Kilbride.

One can park at the old school and start the trail in the walkway that links the Old School, Church and Old Cemetery. This is a great opportunity for children to learn about the trees and keep them occupied during the holidays. They can take their own pictures and make a tree album. Click on the link below and then print it.

To coincide with the launch of ‘Dúlra Bhalana’ a Biodiversity study and plan for Ballon and environs a Native Tree Trail has been established in the heart of our Village. The starting point is on the SS Peter and Paul’s walkway which leads up to the Church from the old School and Credit Union.

The trail, which takes in twelve native trees, leads up into the old graveyard, back through Mullaunmore Estate, on to the Fenagh road and finishes outside The Nolan business complex.

Our local Web Guy, Michael Martin, launched the trail on Sunday 30th August and then led a walk and gave a talk at each of the twelve trees on the trail. The aim is to raise awareness about our native trees and the many interesting and historic facts about each one. 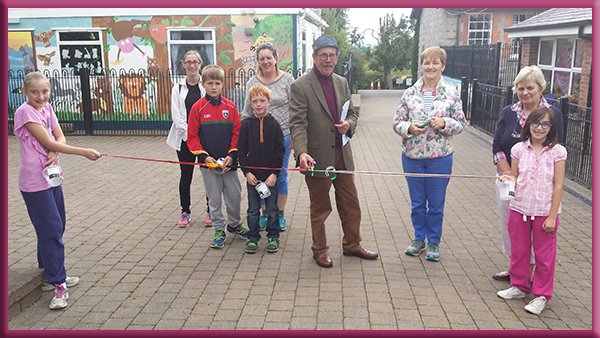 The Native Tree Walk and Talk was part of the 2015 Heritage Week Programme and this year the Heritage Council celebrated twenty years of working with communities.  Our project, ‘Dúlra Bhalana’, has received generous grant aid from the Heritage Council. A booklet on the Ballon Tree Trail is currently being developed and will be available shortly to download at www.ballonvillage.com or at the village business centre at the old school.

In the meantime do take a walk around the trail before the autumn sets in and the trees begin to shed their leaves. Maybe encourage the children to take pictures and make up an album!

Ballon Improvement Group would like to thank Paul Cutler, Head Gardener at Altamont Garden and a committee member of Birdwatch Ireland who compiled the trail, Ballon Business Services for the artwork and printing, Cheetah Electronics for the signage, the Tús Workers for the physical installation, Mullaunmore Residents( some of the trees in the trail are sited in this estate),Maire George for photography, Michael Martin for his help in launching the trail and leading the first official walk and all who helped in any way to get this trail completed.