A Heritage Board has been made for the garden using the information provided by Wish Blanche and Mick McGrath, RIP, in 2002. It has been funded by BIG and made locally by BM Graphics. This is the forth heritage board for the village and more are underway for Ballykealey Lane throughout the year. 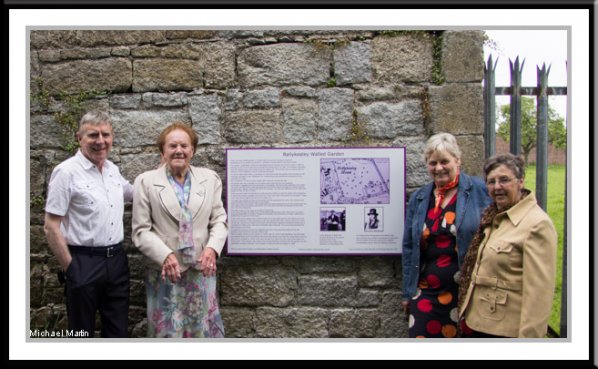 The garden in Ballykealey House was developed around the same time as the house in 1830. It was an imaginative feat as it covered an area of two acres and surrounded by a stone wall 13 ft. high in the aftermath of the famine to create employment. 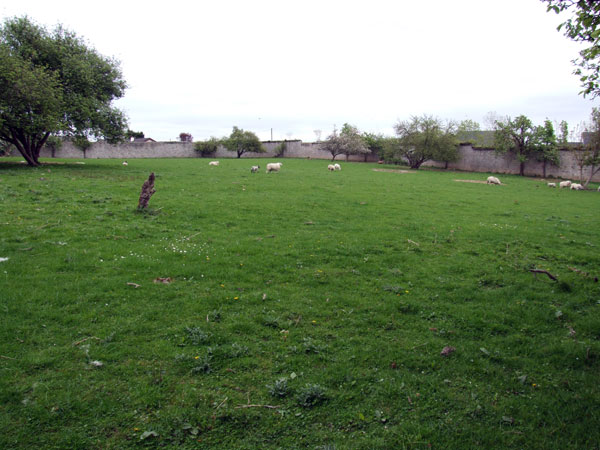 Two brothers, the Foley’s near the Garage Cross, built it with stone from Ballon Hill. The brothers got one penny a day for building it and a halfpenny a day for collecting the stone.
Wish recalls the following story told to him by his dad.

Good English Gold
During her latter years Sarah Lucia Lecky, for whom the house and garden were provided, was taken in her ‘wheelchair’ for a walk though the grounds and the garden by her coachman Mr. Keefe.
She reminisced, “It was my good English gold” that built that garden wall.

The garden was very important as it provided most of the food for the household.
Every type of vegetable and fruit was grown in the garden and the surplus was sold to the public. The south and east facing walls were lined with red brick to absorb the heat from the sun during the day and to release it during the cool of the evening. This was very effective and the walls were pegged to take the pear cordons.

There was also a lean-to greenhouse on this wall about 60ft long and this helped with propagation of seeds and provide protection from the frost. There was a bed in the centre for the plants. Grape vines were trained against the wall and the glass roof. 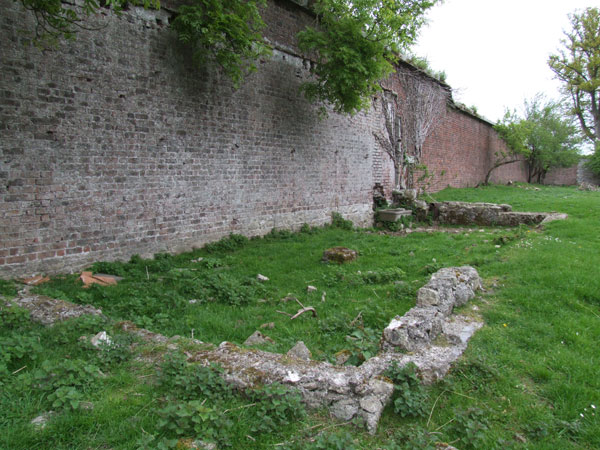 The water was collected off the roof and piped into the greenhouse to a well. This would be nice soft uncontaminated water and the best for the plants.
There was a wood fired boiler in the greenhouse and pipes positioned around the greenhouse. One man spent all his time sawing wood with a ‘one man’ saw to provide the firewood for the main house and the greenhouse.

The water supply to the house and garden is interesting.
A ram pump brought the water from a small stream situated some 500 metres from the house. This pump depended on the flow of water in the stream and the pressure of water created by an artificial damn to pump it to the house. The operation was very simple and effective with few working parts. It was a work of genius and still used today in many countries.

In the centre of the garden was a raised sundial and it was really used for time keeping and not just as an ornament. It was mounted on a 6ft. dia. granite base with a central column for mounting the dial. Along the full length of the west wall there was a beautiful herbaceous border and to complement it there was a rose bed on the other side of the wall. This would have bordered the path leading to the house.

It needed the services of a full time gardener and one or two supporting staff.
The last gardener there was Dinny McGrath of Ballon Hill and here is a photo of him showing off some of the garden produce at the Tullow Agricultural show in about 1949. Bill Barry is in the background – complete with pipe – but who is the child? 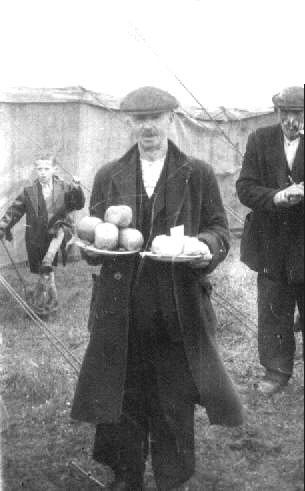 Dinny started working in the garden in 1903, age 16, under head gardener Joe Nicholson, and stayed there as all his working life eventually taking over until the Lecky family sold up and went to England in 1953. Even then he had it on loan from the Land Commission for three years. The property was eventually taken over by the Patrician Brothers but they showed no interest in preserving the garden and it went into ruin.
Dinny gave 50 years to the garden and stayed with us until his 90th birthday a fit and healthy man all of his life.

We believe the first gardener was Robert Greg from Scotland who worked in the garden for 60 years.
This is a sketch of him as a young man as supplied by Elayne Barratt of Ballykealey House. Note the spelling of Gardiner – note the Dickensian style wardrobe.