Burren Rangers Juvenile Club wishes to thanks all players, coaches, committee members, parents and supporters for their commitment to the club in many different ways during the past year. We wish everyone involved in the club and very Happy Christmas and look forward to another successful season in 2016. The  AGM will be on Friday, January 8th, 2016 at 8pm in Rathoe Hall. Motions for consideration at this meeting are to be in by Sunday, January 3rd 2016. They can be sent by email to secretarybng.burrenrangers.carlow@gaa.ie.
We would ask all coaches, committee members and parents to make an effort to attend.

The Liam McCarthy and Bob O’Keeffe Cups won by the Kilkenny hurling team along with the three cups (National League, Leinster and All-Ireland Championship) won by the Carlow Senior Camogie team during 2015 adorned the stage.

Chairperson, Padraig Holden welcomed everyone to the event before MC Jarlath Bolger proceeded with the presentations. Two of the main achievements for the club during the year came in for special mention – the hosting of two clubs, North London and Cooley Kickhams, for Feile Peil na nÓg and winning the Coiste na nÓg Club of the Year Award. These events and achievements took a lot of hard work on the part of the committee, coaches, parents and players and everyone involved were highly commended by all speakers.
Each player from under-6 to under-10 were presented with medals for their achievements and accomplishments with the club in 2015. County Championship medals were presented to the under-18 girls football, under-16 girls football and camogie, under-14 girls football and camogie and under-12 girls football. Mini League and Blitz medals were also presented to members of the under-12 hurling and football teams, under-10 and under-12 camogie teams as well as the under-9 and under-11 Blitz medals for girls football.
One of the highlights on the evening was the presentation of Team Player of the Year Awards. Players were chosen by the team coaches in each age group. The winners were Lochlann McGagh (u-14 hurling); Nathan Fitzgerald (u-16 hurling).Aaron Bolger and Eoin Smithers (u-14 football); Jim Nolan (u-16 football): Shane Ryan (minor football); Emma Cummins (u-14 football); Aimee Kane (u-16 football); Katie Byrne (u-18 football); Michaela Flood (u-14 camogie); Rebecca Kelly (u-16 camogie). The club person of the year award went to Jennifer Brazil. Dannah O’Brien also was presented with a special award by her coaches at under-12 level in girls football.

The club would like to thank all officers, coaches and parents who contributed so much in ensuring the presentations ran efficiently. 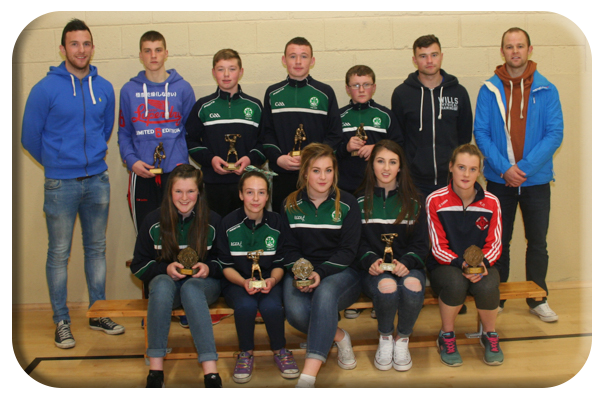 PLAYERS OF THE YEAR AWARD WINNERS 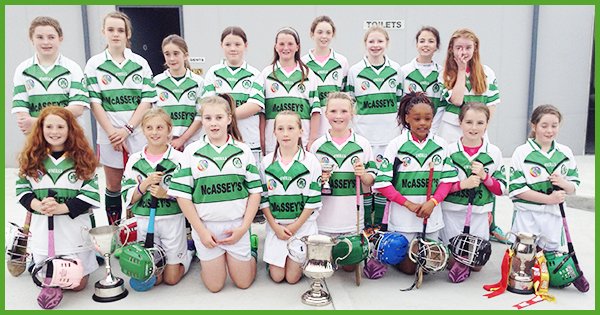 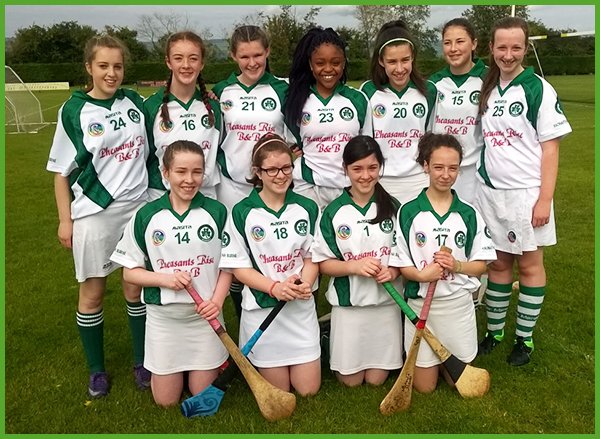 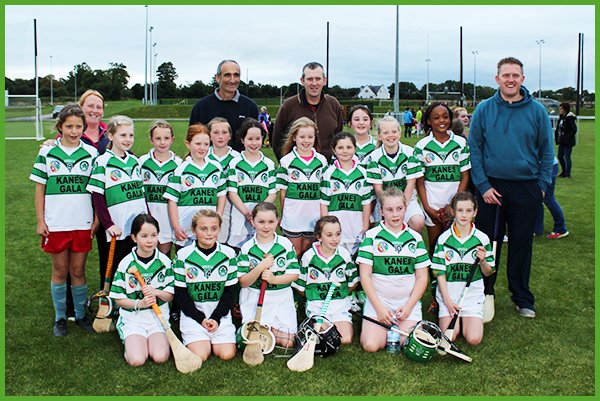 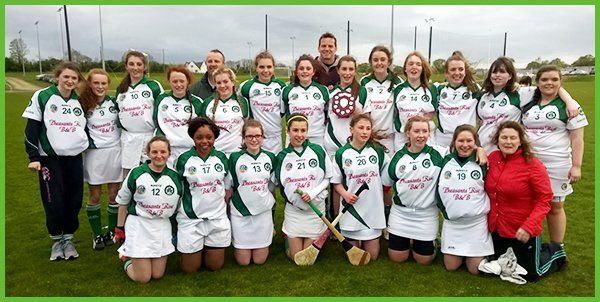 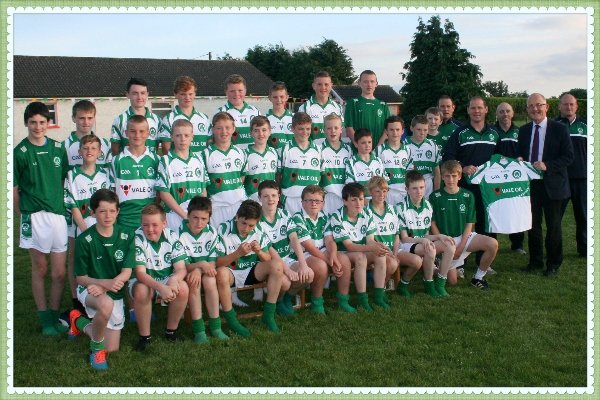 JJ Dowling, Cheetah Property Services presents Terry Kane with a new set of jerseys to be used by the Burren Rangers Under 14 girls.

Feile Peile na nOg 2015 has come to an end but what a weekend we had in Burren Rangers. The atmosphere, volume of people around the club, great football games and even the weather all combined to create an extremely successful weekend. The feedback from all quarters is positive and Burren Rangers can be very proud of its contribution to this popular All Ireland competition. The success is mainly due to the all hands on deck attitude of many clubs members leading up to and over the weekend. It became obvious that pride in the club and its reputation were all paramount importance to many club members.

Burren Rangers hosted a boy’s team from North London and a girl’s team from Cooley Kickhams, Louth and wonderful friendships were made with our own local boys and girls Under 14 teams.

The club would sincerely like to thank the twenty one host families who took boys and girls into their homes and gave them such a wonderful welcome.  Thanks is also extended to all those who contributed food items to the kitchen over the weekend. It was unbelievable to see the amount of donated food that came through the door and whether it was sandwiches, home baking or biscuits it was very much appreciated. Visitors to the club felt very well looked after with refreshments available all day Friday and Saturday.

Sincere thanks to the Burren Rangers Feile Committee of Padraig Holden, Alister Castle, Jennifer Brazil, Matt English Hayden Hayden, Linda Kenny, Martin Doyle, Aisling McGagh, Noeleen English, Terry and Gayle Kane, Keith Bolger, Michael McGagh and all parents who rolled up their sleeves and decorated Ballon GFC, made tea, sandwiches, washed dishes, swept floors, put to the tent, attended to the car park, acted as umpires, scoreboard operators, programme sellers, shop attendees, those who took photographs and videos or supervised the disco all ensuring  that visitors were looked after in a safe, courteous and helpful manner.

Special thanks to Billy Fanning and John Kelly, Ballon GFC who assisted the club in every way possible in having Ballon GFC in prime condition for the weekend and to Joe Donohoe and Ger Proctor for marking the pitch.

Our Feile Mass was another important aspect of the weekend and we wish to thank Fr Whelan, Fr Howard and Kathleen Condron for their help in organising the mass and to those who agreed to do readings and prayers. Our celebration on Saturday evening took place at Ballon Community Centre with the committee kindly agreeing to move the bingo to Ballon National School for Feile weekend to ensure the fantastic facility could be show cased to our visitors. We wish to thank all members of the Ballon Community Centre Committee for their co operation and support and thank Helen Castle and Gerry Maher for setting up the hall on Saturday while members attended matches in Ferns and Blessington.

Over the weekend results for the Burren Rangers Boys team were as follows:

Over the weekend results for the Burren Rangers Girls team were as follows: 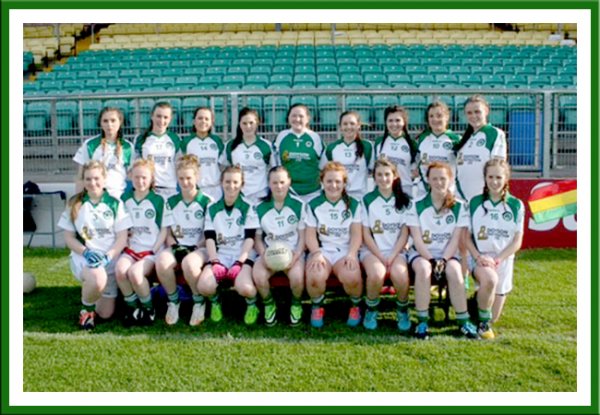 Burren Rangers captured their first ever Carlow Under 16 “C” Championship title following victory over Ballinkillen at the Netwatch Carlow GAA Training Centre on Monday evening last on a scoreline of 3:6 to 0:3.   Burren Rangers held the advantage at half time by 3-0 to 0.3 with the goals coming from Anna Treacy, Veronica Flood and Aine Holden. With Grace Donald at midfield and Rebecca Kelly at wing forward contributing some excellent scores from play the Burren Rangers side dominated the second half.  Burren Rangers who just formed their camogie club five years ago produced a great team performance. Huge credit must also go to their coaches Ger Quinlan, Kieran Kelly, Barbara who worked diligently with this group of girls with great support from club chairperson Linda Kenny and secretary Angela Bermingham. 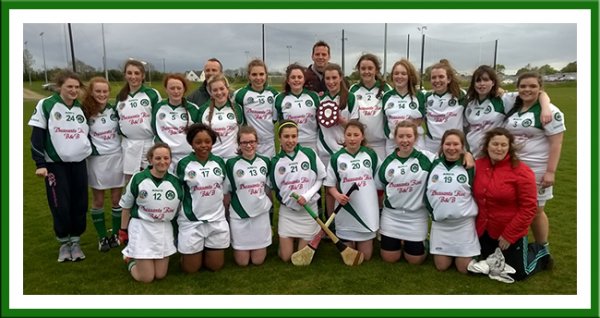 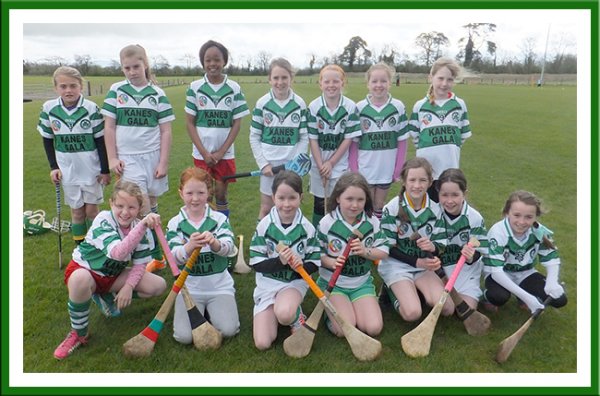 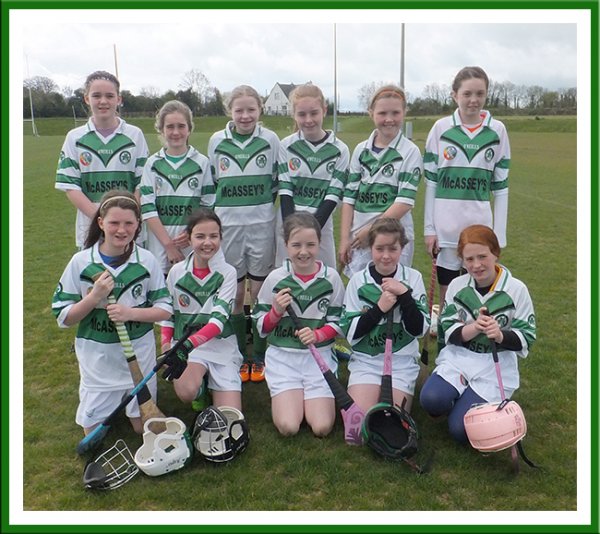 Burren Rangers hosted the Carlow Camogie Under 10 and Under 12 Go Games on Monday evening April 13th with visiting teams from Naomh Brid and Setanta.

The pitch at Ballon GFC was a hive of activity with great camogie on view with all club buying into the new Go Games programme with participation of every girl the important factor on the evening.

Lisa Raleigh and Kevin Barron had the energetic Under 10s in flying form both on the field with their camogie skills and off with their team chant “TEAMWORK”. The Under 12 team with James Connolly and Ann Kieran as mentors showed great commitment in all three of their matches and we can look forward to seeing much more of this team in the year ahead

A final registration night for Burren Rangers Juvenile Club will be held on Friday, February 27th in Ballon GFC Clubhouse from 7.30pm until 9pm. All players must be registered prior to training and competitions commencing.

The clubs caters for boys and girls in football, hurling, camogie and girls football from Nursery Programme (Under 6) to Minor in all disciplines. All coaches are garda vetted and hold relevant coach education qualifications.

Registration fees are 1st child 40e, 2nd child 60e or family of three or more 70e. Under 6s are 10e. If girls are registering with the club for the first time they must produce a copy of their birth certificate.