On the 16th November the presentation night was held in Ballon Hall. 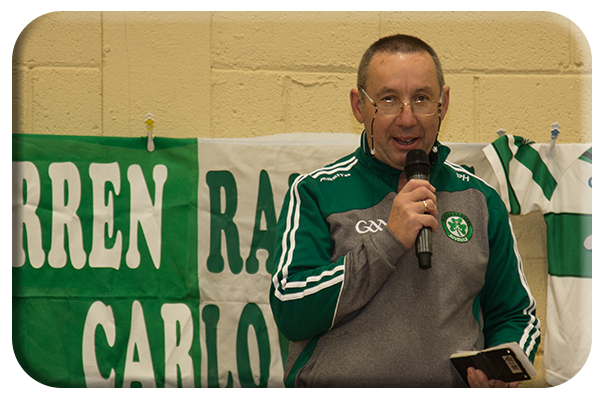 Sunday evening, 26th November, Ballon Community Centre was full to the brim with players, coaches and parents of all age groups, all waiting in anticipation of our Presentation Night. Special guests, Carlow Football Manager Turlough O`Brien and Carlow Captain  Darragh Foley were greeted with smiles and giddy children.

The night started out with our MC Jarlath Bolger greeting the crowd and our special guests. Next, Pádraig Holden, Chairperson of the club, said a few words and did a quick recap on the highlights of the year. After that it was straight into presenting the players with their medals from Under 6`s all the way up to our Minor teams. There was great excitement for the younger players as they ran onto the stage to receive their medals, shake hands with Carlow captain, Darragh Foley and then have their picture taken behind our club flag given to us by Tony Sinnott. Following that, Pádraig Holden presented  Niall Byrne, Chairperson of Fighting Cocks GFC, with two framed pictures of the Under 14 hurling and camogie teams who played their Féile Na nGael matches at the Fighting Cocks during the Summer. Latterly the presentations of Achievment Awards were conferred, starting with `Club Person of the Year` which was awarded to Allison Kennedy and then the `Player of the Year` awards were presented to one boy and girl in hurling/camogie and football from Under 14`s to Minor.

The night closed  thanking Tom Donohue of Kilbride GFC, Niall Byrne of Fighting Cocks GFC, Billy Fanning of Ballon GFC, Kathleen Mullins, Chairperson of Carlow LGFA and to everyone who helped out through the busy year. Parents enjoyed a nice cup of tea and some biscuits while the younger ones were given a packet of crisps and some juice. All in all, there was a buzz in the Community Hall and everyone left in high spirits, looking forward to the upcoming year in the club.

On the 15/1/2017 Burren Rangers held its annual presentation night. Full narrative to come.