BURREN RANGERS WIN FIRST EVER CAMOGIE ‘A’ TITLE
Burren Rangers Under-12 Camogie team are the new queens of Carlow Camogie following their outstanding victory over Myshall in the U12 ‘A’ final. In an enthralling tension filled final played at Dr. Cullen Park on Monday evening (18 May) the Burren Rangers girls showed such determination to see over a gallant Myshall team on a score line of 1-0 to 0-1. Defending was the name of the game and Burren Rangers did it text book style. Myshall took the lead with a point early in the second half before some great combination play involving Anna Tracey, Grace Donald and finally Aoife Lawler saw the first and only green flag of the evening. Burren Rangers defended heroically from then until the final whistle which was greeted by scenes of jubilation by players, coaches and parents.
This is an outstanding achievement for this group of girls who are only playing camogie for three years and to win an ‘A’ title speaks volumes for the work been done by all involved in Burren Rangers Camogie. Pat O’Brien, chairperson of Carlow Camogie Board presented the trophy to Grace Donald, captain. Congratulations to team coaches Mossie Buckley and Barbara Jordan on working endlessly with this team all year. Sincere thanks to Joe and Mary Cummins who treated the girls after the match to refreshments. 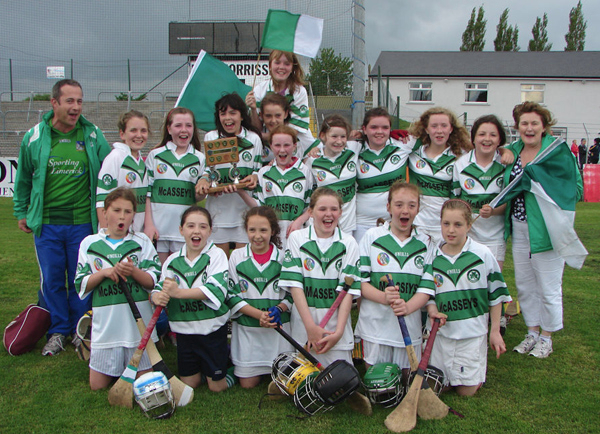 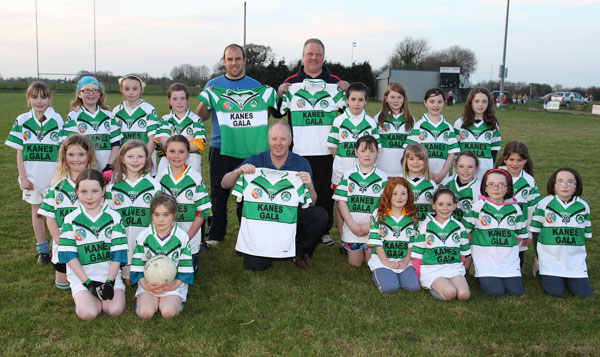 On Thursday 29/3/12,  in Ballon GFC grounds, the presentation of a new set of jerseys kindly sponsored by Terry & Marie Kane, Gala, Burrin Road, Carlow was made to the Burren Rangers Club. The jerseys will be used by the clubs U8 and U9s teams in both camogie and girls football this season. All our young U9s and U10s were on hand to model the new jersey and the presentation was made by Terry Kane to Kevin Doyle (Chairperson Ladies Section) and Alister Castle (Vice Chairperson of Camogie Section). The club is hugely indebted to Kanes Galas for their very kind donation. The jerseys arrive just in time for the start of the camogie go games and leagues.

Alister Castle, Vice Chairman of Burren Rangers Camogie Club welcomed everyone from the eight camogie clubs in Carlow before handing over to Pat O’Brien, Chairman of Carlow Camogie who proceeds with presentations to Under 6s, 8s, 10s, 12s, 14s. Presentations were made by officers of Carlow Camogie Board Mary Coady, Kathleen Thompson, Nuala Quirke and Mick Lillis.  Special guest on the the night was members of the Myshall Camogie Club – the current Leinster Club Junior Champions. Ciara Quirke presented Myshall for the presentations.

A special presentation was made to the Burren Rangers U-14 Camán & Run Relay team of Aine Kennedy, Emma Lawlor, Orla Kenny, Rebecca Kelly and Sarah Bermingham who represented the club in Croke Park on All Ireland Camogie Final Day.

Many thanks to all players and parents who attended and supported the  special camogie celebrations. A special word of thanks to all parents who contributed beautiful refreshments and helped in any way. It is great to see how strong and proud we are of our club – BURREN RANGERS.

CAMOGIE FINALS
Our U9 and U11 teams competed in the finals of the Carlow Autumn Leagues at Ballinaboley on Saturday. Well done girls on your super performances you all played brilliant games. Special thanks to your coaches and to all parents for getting the girls to Ballinaboley bright and early on Saturday. Our U9 team played Setanta and our U11 team St. Mullins.  Team captains Joan Maher (U9) and Anna Tracey (U11) received mementos for the club for participating in the blitz.

HISTORIC CAMOGIE VICTORY
Burren Rangers U-12 Camogie team were the toast of the parish of Ballon / Rathoe on Tuesday last when they returned victorious after defeating Myshall in the Carlow Camogie “B” League final. This group of players have come a long way in two years and are now competing with the best in Carlow Camogie. This final victory is their fifth win is as many game and with spirits high they can look forward to a brilliant future. The final score in the final was Burren Rangers 1-0 Myshall 0-0. This was a hugely entertaining game helped in no small part by a very sporting Myshall side. The two teams are evenly matched and we will see many more great games involving these two neighbouring clubs. Grace Donald got the all important goal in the first half but this victory has achieved by a huge panel effort. Danielle Flood, team captain collected the award on behalf of the panel and paid special thanks to coaches Maurice Buckley and Barbara Jordan for all their work with the team and in getting them to the “B” final in their second year in competitive camogie. Panel was Holly Barrett, Sarah Bermingham, Ciara Buckley, Emily Byrne, Ysobel Castle, Orla Cummins, Sarah Cummins, Megan Dooley, Grace Donald, Caithlin Doyle, Ladine Fisher, Danielle Flood, Veronica Flood, Sarah Haskins, Áine Holden, Rebecca Kelly, Orla Kenny, Áine Kennedy, Nicole Kehoe Dowling, Aoife Lawler,  Aoife McGrath, Sarah Slattery, Anna Tracey, Laura Ward.

U-10 CAMOGIE TEAM WIN COUNTY TITLE
Burren Rangers U-10 Camogie team started the week well for the club when they won the Carlow Camogie “D” League final against a gallant Setanta team at Dr. Cullen Park on Monday evening last. This team showed great skills levels which their coaches Annette Holden and Patrick Byrne working really well with this group all year. It was with great satisfaction that we watched a number of the girls lift and strike the ball in the air on several occasions during this hugely entertaining game.  The future of the club is bright with the skill level of this group of girls. Mia Doogue and Michaela Flood got on the score sheet for Burren Rangers but they had great back up from players all over the field.  Panel: Alanna Barrett, Sarah Buckley, Ciara Byrne, Ava Clarke, Emma Cummins, Mia Doogue, Michelle Eustace, Michaela Flood, Millie Francis, Aoife Kearney, Katie Kennedy, Joan Maher, Shauna Maher, Emma Ryan, Chloe Scully, Jade Whelan.

U-14 GIRLS IN FINAL
All roads lead to Dr. Cullen Park on Wednesday next, May 25th when Burren Rangers U-14 girls contest the U-14 “B” Championship Final against Clonmore at 6.30 p.m.  The girls had a one point victory over Rathvilly in the semi final of Tuesday last 2-4 to 2-3. The girls found themselves behind on a number of occasions in this game but true to all their performances in this championship their fighting spirit shone through in the end.  Great performances on the night came from Karen Nolan, Rebecca Kelly, Megan Dooley, Orla Kenny, Caitlin Doyle, Grainne Mullins and Katie Brennan. Scorers: Aine Kennedy 1-0, Katie Brennan 1-2, Sarah Nolan 0-1 and Ysobel Castle 0-1. Please support the girls in the final.

Our U6 and U8 teams along with the coaches Frances Doran and James Connolly travelled to Muinebeag on Wednesday evening for their first round of Go Games 2011. The girls played mighty in both games and there was great excitement among all the parents who travelled.
Next round of Camogie Go Games is against Naomh Brid at the Fighting Cocks pitch on this Wednesday, May 11th at 6.30 p.m.

Our U-14 teams had two games against Ballinkillen and Naomh Brid over the past week and played some excellent camogie in both games but unfortunately did not manage a victory.

The playing season began for the Burren Rangers  camogie teams on Wednesday when they hosted St. Mullins at the Fighting Cocks pitch.

First up was the U-14 team who drew with St. Mullins on a score line of 1-0 each – Ciara Hickey getting the all important goal for the home side. Others to perform will in this game were Caithlin Doyle, Coco Doogue, Sarah Nolan, Emma Lawler and Karen Nolan.

Next up was the U-10 team who despite playing a fantastic game lost by 2-0 to 0-0. The excitement of parents and coaches from both sides showed how much entertainment was provided by these stars of the future. Team was: Chloe Scully, Michaela Flood, Millie Francis, Sarah Buckley, Mia Doogue, Michelle Eustace, Jade Whelan, Alanna Barrett, Ciara Byrne, Emma Ryan and Joan Maher.  To end the evening games our U-12s recorded a 2-0 to 0-0 victory against the visiting St. Mullins side.

With a total of twenty girls available to play at this age group on the night every girl was afforded playing time by the coaches. Some very good performance on the night came from Sarah Bermingham, Ciara Buckley, Grace Donald, Emily Byrne, Ladine Fisher  and Anna Tracey. Thanks to referee Kieran Kelly for his handling off all three games.

BURREN RANGERS U-14 GIRLS RECORD SIGNIFICANT VICTORY
Burren Rangers U-14 Girls Football team recorded a significant victory over Eire Og in the Carlow
U-14 Football Championship on Monday evening at the Eire Og grounds. This is the first year
ever  for Burren Rangers to enter in the U-14 Championship.