Ballon/Rathoe Community Games and Athletic Club held a presentation evening in Ballon Community Centre on October 23rd to celebrate the participation and achievements of the children in 2016. Special mention went to Edelle Morrissey who won gold at the National Finals in Under 12 art and Katie Keating and Laura Doyle who won bronze in Under 12 Group Singing. The girls performed their winning song, Friendship Song which they wrote with their class and Music Generation in Ballon National School.

Community Games means endless possibilities and this was evident in the hall as the club celebrated the participation in numerous events over the year.

In recent weeks Ballon/Rathoe held the County Cross Country Championships (uneven ages) in Ballon and the club has a great success.

The AGM is in Ballon Community Centre on November 4th at 8pm. The following children represented Carlow at the National Finals in Athlone this year and they were all presented with commemorative plaques by Helen Castle, the club’s secretary.

Many thanks to all the trainers and mentors over the year. Without volunteers none of this is possible.

Ballon/Rathoe participated in the first community games competition of the year, the U13 boys and girls indoor soccer with great success. The Ballon/Rathoe boys’ team, trained by Ray Curran, emerged victors after 4 matches eventually beating Hacketstown in the final 4-0.The members of the winning team were Fionn McCaffrey, Alex Kelliher, Shane Duffy, Joseph Gordan, Evan Connolly, Daragh Kelly, Cillian Fagan and Odhran Curran. The team will now go on to meet Wexford in the next round of the competition. The girl’s team, trained by James Connolly, played a great game against Bennekerry/Tinryland in the semi-final but were eventually beaten 4-1. The team members were Niamh Brophy, Ruth Brennan, Amy Brennan, Aoibhe Connolly, Katie Keating, Leah Whelan, Niamh Lalor and Roisin Connolly. 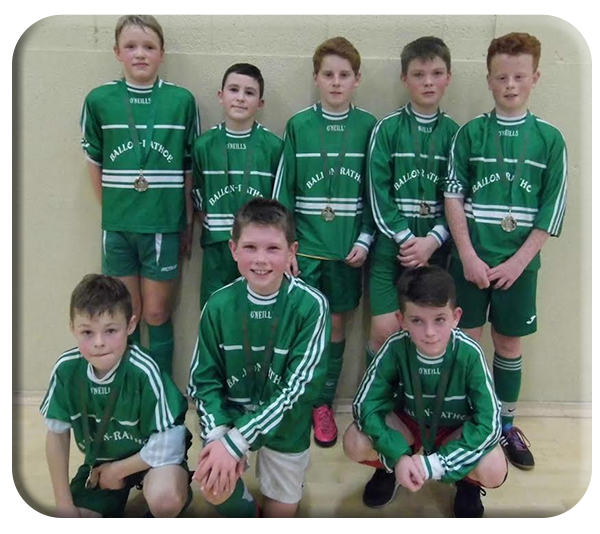 Information on all activities will be posted on the club’s Facebook page
Ballon/Rathoe Community Games and Athletic Club
So like us and keep up to date!