Recently chosen as Co Carlow’s ‘Club of the Year’ Ballon/Rathoe Community Games went one better  when they were chosen as Leinster’s Club of the Year. That award was bestowed on them at the National Community Games Volunteer and Media Awards which was held in Mount Wolseley Hotel, Tullow, last week. The announcement that Ballon/Rathoe had won the award was greeted with terrific cheers and applause and the victory is seen as a huge endorsement of the extraordinary work undertaken by the current and past committees to encourage commitment and inclusiveness in the area. The award was accepted by president, Dick Fitzgerald and secretary/PRO, Olive O’Byrne from Tony Lee, Community Games Deputy president.

Ballon/Rathoe Community Games and AC held their end of year presentation evening on Sunday 24 November in Ballon Community Centre. All children who represented Carlow at the national finals in May and August were presented with awards by Sean O’Brien who kindly came to the presentation evening and spoke to the parents and children about his career and participation in community games.
The committee would like to thank all the parent, children and volunteers for all their hard work in 2019 which culminated in winning the award for best area in County Carlow. Delegates will be attending the National Awards on 7 December in Mount Wolseley.
They are already looking forward to 2020 where events start again on 26 January. They are always looking for volunteers and if anyone is interested please contact Olive on 0879009421/0876183849. 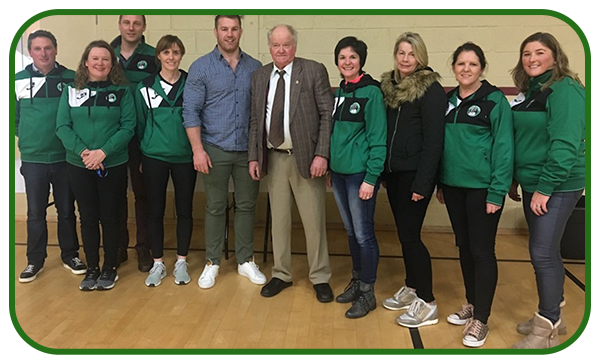 The National Community Games were held on May 6th in Abbottstown for the first time with 98 children from Carlow taking part.13 of these children were from Ballon /Rathoe and they did Carlow and Ballon/Rathoe proud.

We had an early start with the County Middle Distance Relay teams up first. We had 4 children taking part in this event. Martin Carroll under 12, Aoife Kelly under 12 and Evan Corr and Shane Duffy under 14.Brian Hutton had also qualified but as it clashed with swimming he had to choose events. The under 12 boy’s team qualified for the final and despite their trojan efforts and a great run by Martin the team didn’t place this year. Aoife Kelly ran a great finish in her relay but couldn’t make up the ground to place. Well done to both athletes. Evan and Shane were on the under 14 county team and made it to the finals in the afternoon. The conditions were more favourable in the afternoon and the boys came home with a 4th place medal. What a fantastic result.

The quiz team under the guidance of Caroline Byrne had a long day with 16 rounds of 10 questions that went on from 9.30am to the late afternoon. We were in medal position throughout but lost our footing in the last few rounds and despite 4 rounds of full marks we finished with 135 points, only 8 points behind the eventual winners Offaly and just outside the medals. Team members: Aoibhe Connolly, Orla Deacon, Ruairi Murphy, Senan Kearney, Edelle Morrissey and Ruth O’Byrne. We bid farewell to 4 members of the team this year and will be looking for worthy replacements next year

After a tough qualification in Carlow Shauna Kearney competed in the under 10 freestyle race. Shauna performed really well but the competition was tough this year. Well done to Shauna and her brother Senan, it was a family affair for the Kearney’s at the weekend.

Brian Hutton made the right choice and qualified for the final of the under 12 breaststroke. After months of dedication and early morning practise in Carlow, Brian swam a determined race and emerged victorious hitting the wall first to win gold for Carlow! This is a huge achievement for Brian and his family as someone has to drive him in for 5am training and then to school!

We are so proud of all the children who took part and want to thank all the trainers/managers and parents.

We begin qualifications for the next National Finals and the area finals for athletics will be on May 17th 6.30pm-7.30pm for under 6 and 8’s.Under 10 upwards from 7.30pm,please be there 15 minutes early as races will start promptly. Area finals for field events will be May 24th at 6.30pm.Dates to be decided for the long puck. Community Games county finals are June 24th and 25th.All competitors must be living in the Ballon/Rathoe community games area to take part and be available for the June weekend.

Training continues Fridays 6.30-7.30pm for under 6 and 8.Field events for under 10 upwards start at 7pm with athletics at 7.30pm.We have a record number of children taking part so if anyone is interested in volunteering some time please contact Olive O’Byrne on 0879009421 or any other committee member.

Ballon/Rathoe had 3 teams in the Under 14 Quiz Finals this year and we did a double again coming home with gold and silver. It went down to the wire and finished in a tie break of 94 out of 100 each. It all came down to the largest state in America, Alaska if you didn’t know with Team 1 coming out the overall winner defeating Team 2 by 1 point in the decider. Team 3 also did very well with a respectable 75 out of 100 and have may years ahead under 14.The winning team will now go on to represent the county in Abbottstown at the National Finals in the new venue of Abbottstown on May 6th. Team 1: Senan Kearney, Ruairi Murphy, Orla Deacon, Aoibhe Connolly with subs Ruth O’Byrne and Edelle Morrissey.
Team 2: Edelle Morrissey, Roisin Morrisey, Roisin Connolly, and Ruth O’Byrne with subs Emer Decaon and Sarah McCaffrey
Team 3: Sarah McCaffrey, Emer Deacon, Isabella O’Byrne and Oisin Ward. 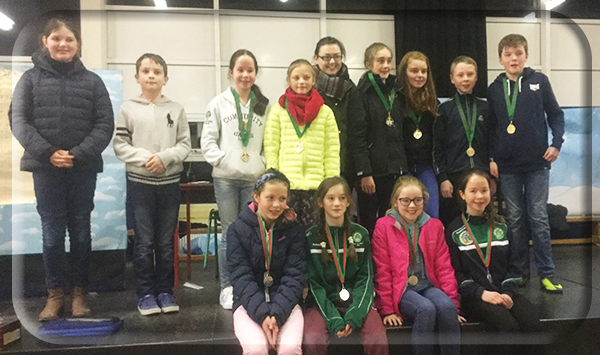 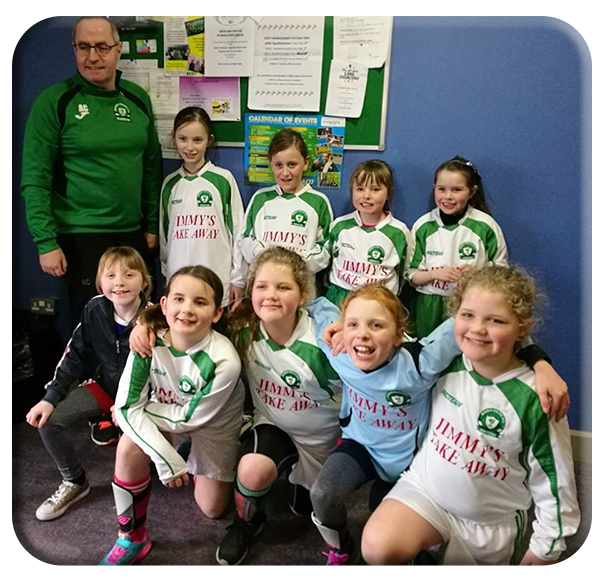 With over 3 decades of outstanding contribution to Ballon/Rathoe Community Games and AC three members of the committee retired last November.

Dick Fitzgerald has been chairperson for over 20 years and many stories were regaled  at a celebratory lunch of current and previous members of the committee held at Ballykealey Manor Hotel on Sunday 15th January. Liam and Eileen Lyons from Carlow Community Games and Hacketstown CG attended and Liam made a lovely speech recognising Dicks contribution to his own club and to the county. Dick is now President of the club.He was presented with a clock and his wife Kathleen with flowers.

Maura Jordan has been treasurer since 2007 and we joked that she wasn’t even at the meeting when she was elected!Maura has held the post for 10 years and Jim Hogan, Chairperson thanked her for all her hard work and outstanding contribution. Her son Patrick was also very involved in the club over the years. Maura received a vase from the club.

Helen Castle has held the secretary’s post for the past two years and retired at the AGM. Helen was heavily involved behind the scenes for the past 2 years helping us with all the administration and registration that keeps the club running smoothly. Helen received a lovely vase.

It was a lovely afternoon with lots of stories from the past 20 years,a lot of experience was in the room and the current committee are always grateful for the time given when we ring and ask for advice.What is remarkable are the lifelong friendships that are cemented from taking part in this wonderful club and that was evident yesterday with the laughter and memories.