Darragh Curran was omitted from the results.

Ballon/ Rathoe representing Carlow, lost to Killeigh, Offaly 4 tries to one in the U 11 Rugby competition.

They were coached by Ivan Cooper and Cathal Duffy.

It turned out to be a very successful weekend for the Ballon Rathoe area at the county finals of Carlow Community Games Athletics finals. The children won a total of 19 individual medals and 7 relay team medals. The huge haul meant the area finished in second place for the Hosey cup which is presented annually to the most successful club.

Ballon/Rathoe AC open sports held at James Morris Park on 4th June  was a great success with 15 clubs from all over Leinster represented.

The standard as usual was very high. The grounds were well laid out and drew many compliments from visiting clubs.

By some miracle of timing the weather was kind and it didn’t rain. A pocket of good fortune that not even the queen of England was blessed with on her great day on the Thames yesterday. 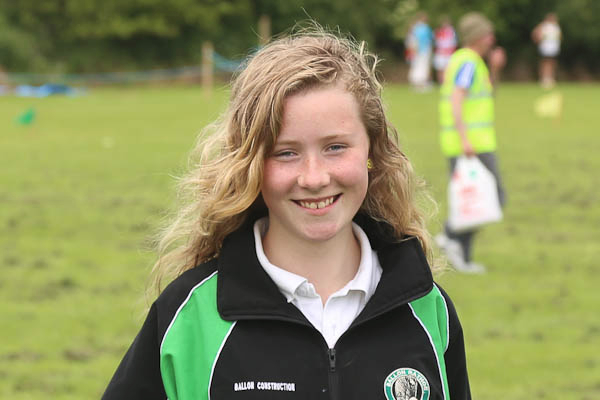 Olympic Girl,  Aine Holden, who will carry the Torch on Wednesday next – best wishes Aine.

WON GOLD AND SILVER IN ART IN COMMUNITY GAMES
The national Community Games finals (non-athletic) were held in Athlone on Saturday and Sunday, 26/27 May and two young Ballon competitiors had podium finishes in the art competitions. They were Kirsty Maher, daughter of Paul and Maeve Maher, Kilbricken who won the gold medal in the girl’s under-14 competition and Ciara Brennan, daughter of David and Dolores Brennan, Laragh who won the silver medal in the under-16 section. For both girls it was a case of if at first you don’t succeed, try again, as they contested the finals last year but without getting amongst the medals. Ballon/Rathoe was also represented at the finals by Kyron Maher (under-10) and Jason Kelly (under-16). The Ballon/Rathoe choir also did well and while not getting amongst the medals they finished in the top half dozen which is quite an achievement on a national stage.  Members of the choir are Orla Kenny, Aine Holden, Nadine Fisher, Alex Murphy, Megan and Allison Brennan, Orla Cummins, Adora Irah, Jacinta Byrne, Ciara Kirwan and Chanice Doyle. They were trained by Caroline Byrne and Breda Nolan.

Ballon/Rathoe competitors won four gold medals at the Carlow Community Games art finals which were held in the Presentation College, Carlow on Saturday, 11 February. The four winners, who will go forward to represent County Carlow in the national finals in August, were Kyron Maher (under-10); Kirstie Maher (under-14); Ciara Brennan (under-16) and Jason Kelly (under-16). Sarah Bermingham won silver

Ballon/Rathoe had two podium finishes at the County Carlow Community Games handwriting finals held in Ardattin on Sunday, 5 February – Eamon Lalor won the silver medal and Aoife Kearney collected bronze. Both competitors were in the under-10 competition.

CHESS CHAMPIONS
Ballon/Rathoe won both the under-12 and under-16 titles at the County Carlow Community Games chess finals which were held in Rathoe Hall on Saturday, 28 January. The under-12 team had a bye to the final where they defeated Slaney Valley (Ardattin and Clonegal/Kildavin) by 5 points to nil. The team was John Kinsella, Sandbrook (captain), Joe O’Neill, Rathrush, Seamus Connolly, Ballymogue, Cormac Kinsella, Sandbrook and Arron Goodwin, Forge Meadow with substitutes Marie O’Neill, Rathrush and Kevin Maher, Ballylean.
In the under-16 competition Ballon/Rathoe defeated Tullow/Grange by 4-1 to progress to the final where they defeated Slaney Valley by 3.5 to 1.5. The team was John O’Neill, Rathrush (captain), Anne Tracey, Ballintrane, Sarah Bermingham, Ballintrane, John Cummins, Mullaunmore and Sean Tracey, Ballintrane with substitutes Joan Maher, Ballylean and Ben Goodwin, Forge Meadow. Both teams will now go forward to represent County Carlow in the Leinster championships.  Last year the under-12 team won the silver medals at the national finals.

The county finals for under11 indoor soccer was held in the Presentation College, Askea on Sunday the 22nd of January. Ballon/Rathoe were beaten in the final by the narrowest margin when beaten by Hacketstown on a score line of 3-2.  The team can be really proud of themselves as they had to play more matches on the day including two that went into extra time. To reach the final they beat Askea 5-0, Tullow/Grange 7-1 and St. Lazerians 3-2.

Their success was due to an excellent team effort with each player giving his all. Top scorer on the day was Jamie Cooper.

The county finals were held in Presentation College, Carlow on Sunday 15th January.

Our u/13 girls took home silver medals. They beat Myshall in the first round 2-0, Myshall conceded an own goal followed by a fine strike from Anna Treacy. Unfortunately they were beaten by the same score line in the final by Rathvilly

The boy’s u/13 team were unlucky to meet Borris in the first round as Borris have won three All Irelands in this event, they were beaten comprehensively despite a spirited display, our only goal coming from Keelan Byrne.

Thanks to coach  Ger Proctor.

Art classes from under 8 to under 16 at 6.30-7.30 on Wednesday nights upstairs in Rathoe hall. All are welcome.

Under 14 quiz: training begins on Wednesday at 8-9pm upstairs in Rathoe hall.