A successful EGM was held on Wednesday 23rd November. Officers and a committee were elected, full details next week.

A registration night for Community games soccer and basketball teams will be held in Ballon Community Centre on Friday 2nd December at 6.30 pm.

Presentations for their efforts in Leinster competitions under A.A.I. were made to: Jamie and Scott Cooper, David Lawler, Darragh Curran, Sean Treacy, Eoin Hosey, Nick Mullins and Shane Smith.

Those presented for representing Carlow in the All Ireland Community Games were:

This team came second in the All Ireland Finals. They were coached by Seamus Hogan.

Mary Flood got silver in the U 16 All Ireland discus. Michael Osbourne said Mary was an inspiration to other athletes as Mary has represented Carlow at U – 8 60m, U – 12 long jump, U – 14 shot putt twice, U – 16 javelin before winning, her All Ireland medal. Michael thanked all the coaches and committee members as we look forward to another year.

Last night, in Rathoe Hall, the end of season party  awards  presentations were made  to the many participants who achieved success in the Community Games competitions. M.C. Mick Osbourne  thanked all the children for their efforts and praised the coaches, sponsors and the supporters for their energy and interest. It’s so important that children be given the opportunity to achieve their potential and to learn to compete. The AGM will be held Friday 11th November and all parents are asked to support their children by making some contribution.

Ballon/Rathoe AC open sports held at James Morris Park on 6th June last was a great success with 15 clubs from all over Leinster represented.

The standard as usual was very high. The grounds were well laid out and drew many compliments from visiting clubs.

The perpetual cup was won by ST. lAURENCE O TOOLES A.C. and the relay cup by Bree A.C.

We would like thank our sponsors  Little Piggys footwear Carlow and McASSEY Butchers Ballon and everyone who helped on the day. 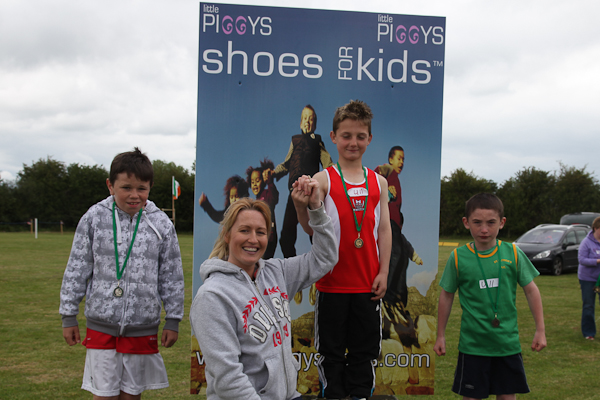 Your support is appreciated  A full list of results appear in the sports pages and some of the action is shown below.

The club had 2 athletes participating in the Leinster pair’s finals U 9 and U 11 in Claremount Park, Navan on 28th May. The pair of Sean Treacy and Darragh Curran finished first in the ball throw U 11 and 4th in the long jump. Darragh Curran was also part of a county relay team that took gold.
Well done to both boys.

Community Games
Well done to our chess team who reached the all Ireland finals held in Athlone on 28th & 29th May representing Leinster we beat the Munster champions but lost to Connaught in the finals on Sunday. The team was John O’Neill, Rathrush (captain), John Kinsella, Sandbrook, Joe O’Neill, Rathrush, Sarah Bermingham, Ballintrane and Marie O’Neill Rathrush with substitutes Seamus Connolly, Ballymogue and Cormac Kinsella, Sandbrook

Art
Congratulations to Kira Brennan and Kirstie Maher who competed in the finals of the art, Kirstie finished in 6th place.
Well done to both girls.

Tag rugby finals:
Our area hosted this competition on Friday night the 6th May in the sports field Ballon. We had one U 14 team competing, unfortunately we were beaten by Rathvilly by a single try in a thrilling game. The team was Coco Doogue, Caithlin Doyle, Grainne Mullins, Rebecca Kelly, Rory O’Connor, Jim Nolan, Donal English – Hayden, Seamus English – Hayden, Barry Ryan, Shane Ryan, William Nolan and Padraig Byrne. The team was coached by Nicola Kirwan and Willie Byrne.

The above was held on Easter Monday at their grounds in Askea and it was the club’s first outing of the year.
Results were as follows:
Under11 boys ball throw: 1st: Eoin Hosey, 3rd: Darragh Curran.
Under13 girls shot putt: 1st: Becky Kelly.
Jason Kelly literally hit the ground running taking home no less than 5 medals.
He came 2nd in the under15 boys 100m, the high jump and in the shot putt, 3rd in the 800m, and 2nd in the under16 long jump.
The under12 boys 4x100m relay team won silver medals. The team was: David Lalor, Sean Treacy, John Kinsella and Scott Cooper.
Well done to all.

Training
A reminder that training continues for all age groups in the community sports field every Tuesday and Friday night.
New members are especially welcome.
For any inquiries, contact 087 900 9421.

Ballon/Rathoe under-12 chess team are the champions of Leinster following their success in the semi-final and final which were played in St. Fiacc’s School, Graiguecullen, on Sunday 27 March. Victory over Piercetown/Murrinstown, Co. Wexford in the quarter-finals two weeks ago set the local team up for a semi-final clash with Enniskerry and they conquered their County Wicklow counterparts by 3.5 points to 1.5.  Ashbourne, County Meath provided the opposition in the provincial decider and once again the Ballon/Rathoe team rose to the occasion to see off the challenge on a scoreline of 3 points to 2.
Members of the successful team were John O’Neill, Rathrush (captain), John Kinsella, Sandbrook, Joe O’Neill, Rathrush, Sarah Bermingham, Ballintrane and Marie O’Neill Rathrush with substitutes Seamus Connolly, Ballymogue and Cormac Kinsella, Sandbrook. The team was coached by Seamus Hogan, Rathrush and John Kinsella, Rathrush and they now go forward to represent Carlow and Leinster in the All-Ireland finals in May. This was Ballon/Rathoe’s first ever Leinster title in chess having finished runners-up on three previous occasions.
The Community Games Committee acknowledges the work being done by Ballon National School principle, Noel Heffernan, in introducing the children to chess at a young age. 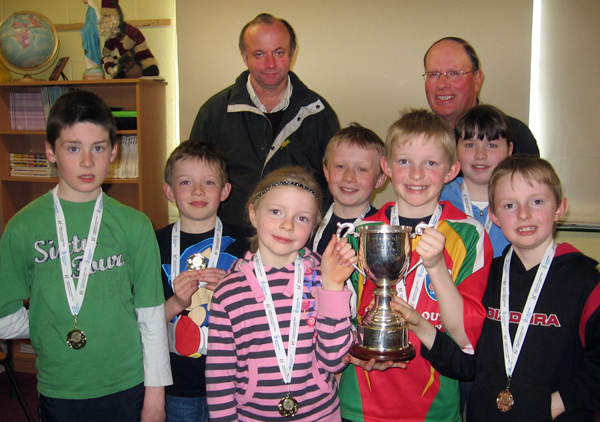 Ballon / Rathoe hosted the cross country county finals in the sports field Ballon on Sunday 15th March: Aoife McGrath finished 4th in the u12 group 600 meters and was followed by Michaela Flood in 5th place. Well done to both girls.

Training for the older age groups will be arranged shortly.

Quiz
The County finals of the U 14 quiz was held in The Presentation School, Carlow on Friday night 11th February, the area was represented by 3 teams, although they competed quite well they were not among the medals. The teams were: Team 1. Eoin Fitzpatrick, Rebecca Mc Donagh, Conor Quinn and Rebecca Kelly.   Team 2: Hugh Mc Inerney, Danielle Flood, Michael Joyce and Craig O’Rielly.  Team 3: Raina Mc Elwee, Darragh Quinn, Mikey Slattery and David Fitzpatrick. Well done to all and special thanks to their coaches, Willie Byrne and Ann Quirke,

Art
The County Finals were held on Saturday 12th February in The Presentation School, Carlow. The area did very well bringing home 2 gold, 3 silver and 1 bronze. Gold Medal winners were Ciara Brennan in the U 14 competition and Kirstie Maher in the U 12. Silver medal winners were Jessica Byrne in the U 12, Kyran Maher in the U 10 and Jason Kelly in the U 16 boys competition, John O’Neill took home bronze in the U 12 boys. Others that participated Roisin Connolly, Leah Whelan, Michelle Eustace, Caithlin Chapman, Abbie Bolger, Aoife Lawlor, Eoin Brophy, Ciaran Haskins and Shane O’ Byrne. They were coached by Jenny Chapman and Maeve Maher.

Athletic training: indoor training continues in Ballon Community Centre on Friday nights.
U 6 and U 8 Boys and Girls 6-7 pm.
U 10 Boys and girls 7-8 pm.

This team competed in the indoor soccer county finals on Saturday 29th January, they had a great start beating Borris in the first round but unfortunately they lost to Hacketstown in the next game, the team was Scott Cooper, Sean Tracey, Brendan Mc Donagh, Lochlann Mc Gath, Aaron Bolger, Dara Curran, John Kinsella and Aaron Goodwin they were coached and managed by Raymond Curran.

The finals were held in Hacketstown on the 4th February we entered 3 teams in this competition but unfortunately we were not among the medals.
The teams were:
Mixed U 10: Joe O’Neill, Marie O’Neill, Michelle Eustace, Aaron Bolger, Dara Curran and Thomas Aughney.
Mixed U 12: John O’Neill, Shane O’Byrne, Michael Aughney, Jamie Proctor and Abbie Bolger.
Mixed U 14: Conor Quinn, Craig O’Rielly, David Fitzpatrick, Danielle Flood and Eoin Carroll.
They were managed by Heather Zeraffa and Maura Jordan.

The U 16 team did not finish among the medals the team was: Kevin Maher, Darragh Bermingham and Dan O’ Connor. They were coached by Seamus Hogan.

We wish to thank all of those who participated and a special thanks to the parents who gave their support to all the above competitions.