The Club would like to thank all who bought and sold tickets, Joe Doyle for use of his permises and Nicky Canavan providing the music for the night. Congratulations to Kathleen Abbey who won the best Christmas Jumper Competition.

Wishing everyone a very Merry Christmas and Peaceful New Year.

In his opening address, Chairman Matty Dowling acknowledged the great progress made by the Club during 2017.
A particular mention to the Senior Ladies this year with some new faces in the mix and the expertise of our more experienced players they put in tremendous work and it paid off with them for the first time ever reaching the All Ireland Final, where highlights of this Final were shown on TG4 and it was fantastic to see our club colours on the television. He thanked the Club Committee Members and trainers for all their hard work and commitment during the year which showed in the success of our Juvenile teams this year in the Feile competition, particularly our U14 girls who reached the Final in the first ever John West Feile competition. He congratulated Katie Brennan who received All Star Award for Ladies Roaming Player of the Year 2017. To all who helped out at our own Rounders Tournament held during the year, we are one of the very few clubs who run a tournament like this for the kids and this has been acknowledged by other Clubs who take part. He also thanked the local businesses who supported the Club with sponsorship in any way throughout the year, with a special word of thanks to Michael McAssey for his continued support to the Club.

Secretary Ann Marie Brennan gave a detailed review of the Club’s activities on and off the pitch during the year noting the large number of juvenile members now in the Club and acknowledged the hard work done by all trainers and committee members. Special mention to two new Competitions the Club took part in this year , that being the girls U13 Community Games where they held Wexford team to a replay, as never previously have any other girls team given Wexford a run for their money in the history of community games rounders &  also our U14 girls competed in first ever U14 John West Feile where they qualified to Final but were beaten by a very experienced Athenry Team.  She congratulated Becky McGrath, Cian Abbey & Hannah Curry on receiving Club Player of the Year Awards.

Treasurer John Doyle provided a very comprehensive report of the Club’s financial position and once again thanked all local businesses who supported the Club during the year. Our main fundraiser during the year was Ballon’s Got Talent. A lot of hard work went in by all committee members and he thanked them all for this. He thanked all local businesses who supported us and also Paul Cummins and Ger Cummins for all the help they gave us. To all the contestants on the night and their families for their support. Without everyones help this would not have been the huge success it was.

Congratulations to Cian Abbey who won 2017 Club u13 Boy of the Year. 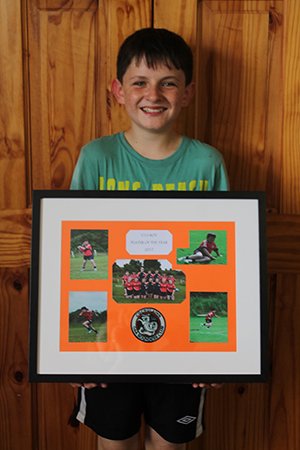 Cians position on the rounders pitch would be firstly bowler but Cian is an all rounder and can move to any position on the field when needed, a talent every club loves to see. This year Cian stepped into different positions on the field from bowler to fielder to base minder and this shows how versatile he is as a player.
Cian has a great eye for the game and very calm in his decisions. When a big hit is expected Cian hits them short which more often than not confused the opposing team and gets him to the base and once he’s there everyone has every faith in Cian to do what’s needed and get home because everyone knows with Cians determination and speed nothing will get in his way.
Cian competed in u13 community games & u14 mixed feile this year and with his determination, smart batting & versatility he played an integral part on both of these teams. 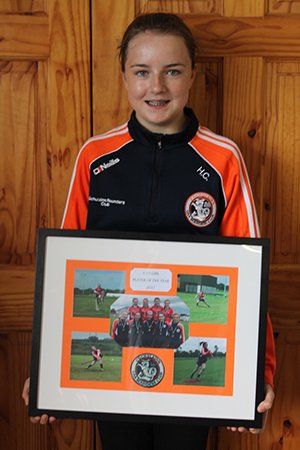 On the rounders pitch Hannah’s main position was 3rd base minder.
Hannah has both the talent to bat well and had some super catches during the year on the field and this was particularly noted in the U14 John West Feile competition where her catches and also her phenomenal batting which on most occasions moved team members 2-3 bases at a time, were crucial to her team reaching the Final of this competition. Hannah captained this team which is a credit to her character as a person who is determined, consistent and never gives up always giving 100% concentration and effort. Hannah also progressed to the U15 Girls team this year also.

Congratulations to Becky McGrath on receiving 2017 Club u13 Girl Player of the Year. 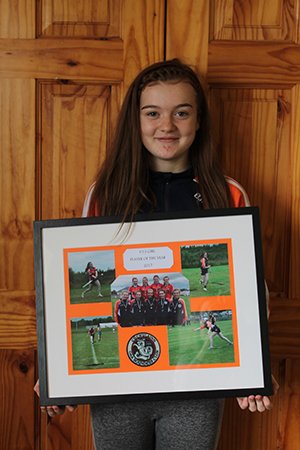 Beckys main position on the rounders pitch was Bowler which is notably the most difficult position within the game of rounders requiring both accuracy and speed and Becky demonstrated this in the U13 girls community games this year where her bowling was a crucial part of the game and for the first time ever our girls team bought a Wexford team to a replay to qualify to Leinster stages. One of the days which stood out to all mentors and players was the u13 feile competition where Becky bowled 20+ innings in one day, this wouldn’t even be heard of at Senior level and on that day it was noted the commitment and determination she showed for the club and her team mates.

KATIE IS PLAYER OF THE YEAR 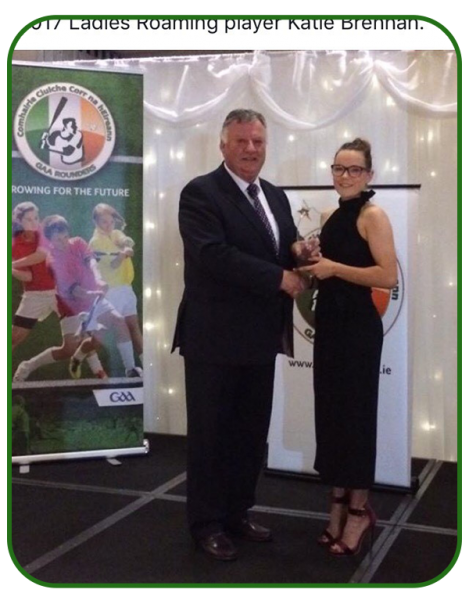 Congratulations to Katie Brennan, Shraugh, on receiving the 2017 Rounders Ladies Roaming Player of the Year Award at a reception in the Green Isle Hotel in Dublin on Saturday 23 September. Katie made a huge impact in the championship this year as Cuchulainn Rounders Club’s senior ladies team reached the All-Ireland final for the first time only to be beaten by the holders, Glynnbarntown, County Wexford.

Throughout the year Katie has played consistently and has produced some great catches. Her speed on the field has helped her steal bases and even produced a home run along the way, most notably in the All-Ireland final. She has both the talent to bat well and make some super catches.

Her main role on the team is as catcher but she showed her ability to play in most positions during Cuchulainn’s run to the All-Ireland final and when bowler Ann-Marie Brennan was unavailable through injury Katie stepped into that position and showed how versatile she is. This was particularly noticeable against Greenhills where the winners would advance to the All-Ireland semi-finals. That game was won and so was the semi-final against Breaffy, County Mayo and in the decider Katie moved to an outfield position demonstrating once more her all-round ability.

One of her proudest moments was when she represented her club in Croke Park in an exhibition match. Katie did her club proud and even produced a home run on the most public stage.

Not so long ago Katie was an under-age star with the club winning player of the year within the club but her greatest achievement as an under-age player was winning a minor All-Ireland title. Her progress to playing in a national senior final and winning this prestigious award has been rapid.

There are more strings to Katie’s bow than rounders and she has excelled in both Gaelic football and soccer and her talent hasn’t gone unnoticed in these disciplines either with young player of the year awards coming her way.

Cuchulainn Rounders Club are delighted that Katie has reaped the rewards of her hard work throughout the years.

Cuchulainn Senior Ladies competed for the All Ireland Championship Title on Sunday 27th August. They came up against a very  experienced Glynnbarntown team from County Wexford, who were the reigning champions of 2016. Up to the 3rdinning Cuchulainn held Glynnbarntown very close with only 3 runs between them.  In the third inning Glynnbarntown showed to everyone why they are the reigning champions and that they were there to make sure they went home with their two in a row.  With severe batting they went well ahead and it was catch up from there for our women but they never gave up and every opportunity to try to make a comeback was made.  We had some great catches out field and even a home run from Katie Brennan.  This was an excellent achievement by the women with it being the first time ever in the history of the Club to reach a Womens All Ireland Championship final. They have progressively gone from strength to strength this year with the addition of new players along side our long term experienced players.  We are sure that the women will bring forward all their experiences from this year to the 2018 season and hopefully be back to the finals again next year. 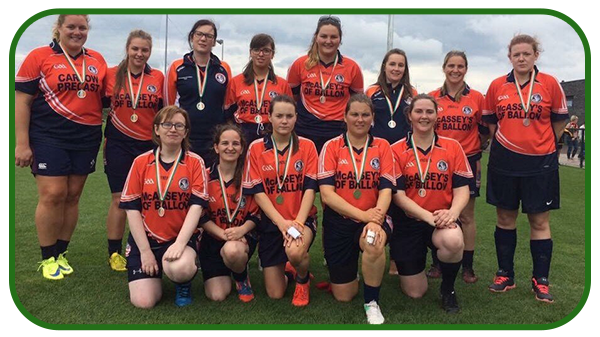 The Club would like to thank all the Supporters who travelled on the day and gave us great support from the sidelines from flags to headbands and our own teddy mascot.   We would also like to thank those who sent messages of good wishes to the Club. Finally a huge thanks to Máire George of Siopa Glas, Mary Jordan of The Forge and Joe & Mary Doyle for the hospitality given to us when we arrived back in the village that evening. Bring on 2018!! 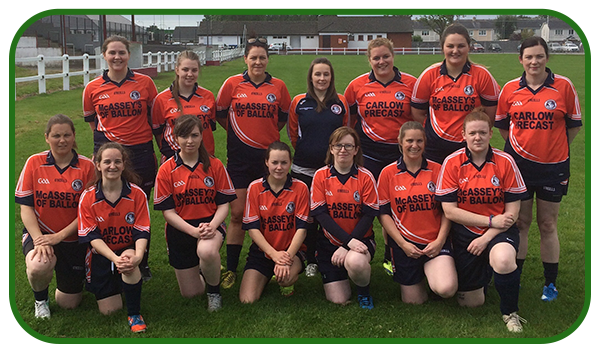 We are holding our registration night on Friday 17th of February from 7.00-8:30pm in Ballon GFC Clubhouse for children aged 9+, as to compete in competitions the minimum age is 9.
Registration fees for this year are  €10 1 child, €15 2 children & €20 3 or more children & adults €25.
All players MUST be registered 2 weeks prior to training/matches due to insurance purposes, we would appreciate if you child is playing this year that you would register them on the night of the Registration as we hope to start back training in March. Copy of birth certs are required for all new members to the club.
Look forward to seeing you all on the 17th for registration.