The death took place on Sunday 19 October at Riverdale Nursing Home, Ballon of Mrs Marie Kennedy, Gilbertstown, Rathoe. Aged 82 years she was formerly Marie Deering and was a native of Ardnehue, Bennekerry.She married David Kennedy of Gilbertstown in 1955 and the couple had eight children. Apart from rearing her children and helping on the family farm Marie found time to get involved in parochial work and was secretary of the Parish Council from its inauguration until ill health forced her to retire. She was a founder member of Rathoe whist which is still going strong after 36 years; was active on the parent’s council of Rathoe NS while her children were still attending and was a driving force behind the Ballon/Rathoe Evergreen Club. She was also involved in various fund-raising ventures such as the parish auctions, the annual Goose Club, novelty bingo and silver circles.

A deeply religious woman and daily Mass goer she made her weekly Holy Hour until she was no longer able. She was also a Eucharistic Minister in Rathoe Church and was a strong supporter of the mission societies by the sale of magazines, stamp collecting and attending fundraisers. A member of the Apostolic Society she organised the annual bus to Knock Shrine and Our Lady’s Island in Wexford. The restoration of Templepeter Graveyard was a project close to her heart and she acted as a Eucharistic minister at the annual mass there in the earlier years.

Marie retired from all parochial activities in 2009 and moved to Oldtown to live with her daughter but Rathoe was never far from her mind and she continued to attend the meetings of the Retirement Group there on a regular basis..

Her remains reposed at McGuill’s Funeral Home in Bennekerry before being removed to St Partick’s Church, Rathoe on Tuesday 21 October and burial took place in the adjoining cemetery on the following day after Requiem Mass. Marie is mourned by her family Joe (Gilbertstown), Patrick (Ardnehue), Mary Moloney (Oldtown), David (Gilbertstown), Cepta Burke (Clare), Jackie Kennedy-Harte (Boston), Edward (Gilbertstown) and Teresa Sweeney (Bunclody), her sister Pauline Brophy (Ballickmoyler) and by her sisters-in-law, brother-in-law, sons-in-law, daughters-in-law, nieces, nephews, nineteen grandchildren, one great-grandchild, relatives and friends. She was predeceased by her husband, David, in 2009. 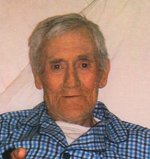 The death took place at the District Hospital, Carlow on Friday 22 August of Michael O’Neill, Bendenstown, Rathoe. He was aged 84 years and was formerly from Crophill, Castledermot. As a young man he worked with the Biggs Family at Kilnock showing horses and would have been a regular visitor to all the major shows including The Dublin House Show. Before retirement he worked in the building trade with various local firms. His passion though was horses and up to last year kept up to eight Shetland  ponies as well as a collection of hunting dogs. His remains reposed at Dunne’s Funeral Home in Castledermot before being removed to the Church of the Assumption on Sunday (24 August) for Requiem Mass  and burial took place the same day in Colstown Cemetery. Michael is survived by his sisters Betty (England), Helen (Dublin), and Essie (Rathvilly), sister-in-law Nellie, brother-in-law Noel, nieces and nephews. 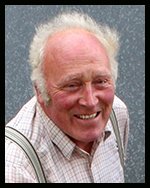 The death took place on Tuesday, 27 May at St. Luke’s Hospital, Kilkenny, of Mr Paddy Smyth, Ballinadrum, Ballon. Paddy lived and farmed in his native Ballinadrum for all of his 77 years; content and devoted to his farm animals, pets and crops. Paddy was very active; living as independently as possible to the end. His determination shining through as he ploughed his tillage ground in his final Spring-time. His remains reposed at Kearney’s Funeral Home in Fenagh before being removed to SS Peter and Paul’s Church, Ballon, on the evening following his death and burial took place in Ballon cemetery on Thursday, 29 May following Requiem Mass. Paddy is mourned by his sister, Anastasia O’Neill (Laragh); brother, Tony (New Ross); nieces and nephews; in-laws; extended family; neighbours and friends, including his faithful friend, Prince. Paddy was pre-deceased by his younger brother, Billy (Ballon Hill).

The death took place on Wednesday 7 May at the Sacred Heart Hospital, Carlow of Mrs Julia Hickey, Larkfield, Carlow and late of Carrigslaney, Kilbride. She was formerly Julia Holden from Ouragh. Her remains reposed at Kearney’s Funeral Home in Fenagh before being removed to the Cathedral of the Assumption, Carlow on the evening following her death and burial took place in Ballon cemetery on Friday 9 May following Requiem Mass in the Cathedral. Julia is mourned by her daughter, Anne and by her nieces, nephews, sisters-in-law, neighbours, relatives and friends. She was pre-deceased by her husband Denis.

The death took place at St. Luke’s Hospital, Kilkenny on Friday 18 April of Mrs Mary Roche, Rathoe. She was just a week short of her 94th birthday. The late Mrs Roche was formerly Mary Kelly from Killinure, Tullow and she married Walter Roche from Rathoe in 1944. The couple farmed at Rathoe all their lives and apart from her work and her family Mary’s main interests were reading, gardening and cookery. Her remains were removed to St Patrick’s Church, Rathoe on Sunday 20 April and burial took place in the adjoining cemetery after Requiem Mass on the following day. The late Mrs Roche is survived by her sons Paddy (Rathoe) and Walter (Hol) also Rathoe; her daughters Christine O’Toole (Carrigslaney), Patricia Roche (Rathoe) and Mary Swift (Dublin)  and by her grandchildren, great-grandchildren, daughter-in-law, sons-in-law  and other relatives. She was predeceased by her husband Walter in 1974 and by her brother PJ and daughter-in-law Mai 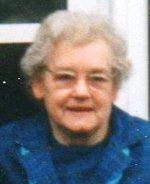 The death occurred on Sunday 16 February of Bridie Nolan, Bendenstown, Rathoe in the loving care of the matron, nurses and staff of Sacred Heart Hospital, Carlow. In her 91st year she was formerly Bridie Healy, Killinure, Tullow.   In her youth she was involved with the Legion of Mary in Ballyconnell and following her marriage to Bill Nolan on August 1954 moved to Rathoe where she was involved in The Apostolic Works Society. Bridie was blessed with a gifted pair of hands and was a keep knitter, sewer, baker, cook and general homemaker whose brown bread, home-made butter and apple tarts were enjoyed by many who came visiting.  Her remains were removed to St. Patrick’s Church, Rathoe on Tuesday 18 February for Funeral Mass and burial took place afterwards in the adjoining cemetery.
Bridie is survived by her daughters Brigid McDonald (Garryhill) and Mary Flynn (Nurney), sons  John (Rathnapish, Carlow) and Noel (Bendenstown), daughters-in-law, sons-in-law, sister-in-law, grandchildren, great-grandson, nieces, nephews and other relatives and friends 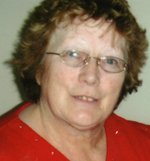 Winifred  Tyler, Grange, Mooncoin, County Kilkenny whose death occurred on Sunday 16 February in Waterford Regional Hospital was formerly Queenie Corrigan from Ballon Hill. She was aged 66 years. Queenie worked as a carer of the sick and elderly,  firstly in The Cheshire Home in Tullow and later in Homes in Tramore and St. Patricks Hospital, Waterford City. Her remains reposed at her home before being removed to The Church of The Assumption, Mooncoin, on Tuesday 18 February for Requiem Mass and interment took place in the local cemetery immediately afterwards. Queenie is survived by  her sons Mark, Sean and Liam,  sister Peg McGrath, Maple Lawn, brothers Liam (Ballon Hill), Johnny (Ballon Hill) and Matty (Maple Lawn), daughters-in-law, grandchildren, sisters-in-law, nieces and nephews. She was predeceased by her husband, Sean and sister, Mary Smithers. 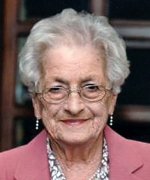 The death took place at St. Luke’s Hospital, Kilkenny on Thursday 13 February of Nancy Halligan, Ballintrane. Aged 86 years, she was formerly Nancy O’Neill, Clooneen, Nurney and was one of the best known and popular residents of the parish of Ballon and Rathoe. Nancy worked hard all her life juggling the rearing of a family of eight with holding down jobs, in turn, with Erin Foods and The Sugar Factory in Carlow before bringing down the curtain on her working life in Ballykealey House Hotel, Ballon in her 83rd year. She was very active up to recent years, living an independent life and driving her car up to her 84th year. Nancy always lived locally  except for a ten month period when, at 80, she went to England to help her sister Betty nurse her ill husband.
Her remains reposed at Kearney’s Funeral Home in Fenagh before being removed to St Patrick’s Church, Rathoe on the evening following her death. Burial took place in the adjoining cemetery after Requiem Mass on Saturday 15 February.
Nancy is survived by her sons Billy (Tullow), Ted (Nurney), Ger (Bagenalstown),
Kevin (Bagenalstown) and Oliver (Tullow); daughters, Frances Nolan (Bendenstown), Terry Hennessy (Dublin) and Jackie Clarke (Ballintrane); brother Joe O’Neill (Bagenalstown), sisters Betty Doyle and Emmie Kavanagh (both
England), sons-in-law, daughters-in-law, brother-in-law, sisters-in law, grandchildren, great-grandchildren and one great- great-grandchild. She was predeceased by her husband, Ned in 1989. 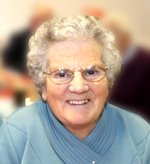 Her remains reposed at her sister Pauline Murphy’s home, Grange before removal to the Church of the Most Holy Rosary Tullow on Sunday evening and burial took place in Ballon cemetery on Monday 3 February following Requiem Mass in Tullow.

The death took place on Monday 6 January of Tom Kealy, Closh, Ballon. Aged 87 years, Tom worked for the Carlow County Council on road maintenance for many years. His remains reposed at Byrne’s Funeral Home, Tullow before being removed  to SS Peter and Paul’s Church, Ballon on Thursday 9 January for Requiem Mass. He was interred in Ballon Cemetery immediately afterwards. Sympathy is extended to his brother Paddy (Closh) who is the last surviving member of the family.