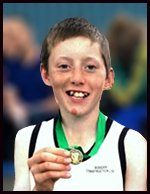 There was an outbreak of shock, heartbreak, grief and sympathy, all in equal measure, when the news of the death of 16-year-old Donal English Hayden in a farm accident broke on Wednesday 26 August.  Donal, the second youngest child of Matt and Noeleen English-Hayden of Rathrush, lost his fight for life in St Luke’s Hospital, Kilkenny, from injuries suffered when a tractor and trailer he was travelling in overturned and slipped into a dyke on a neighbour’s farm inflicting injuries from which he later died.
Donal was a talented young man both as an athlete and as a hurler. As an athlete he specialised in cross-country running, the high jump and pole vault and succeeded in winning Leinster and All Ireland tiles. He represented Ballon/Rathoe in Community Games with success and was very involved with Burren Rangers in hurling for the past six years.
He was a pupil at Knockbeg College and was awaiting the results of his junior certificate examinations next week. Tributes have been flowing in all week to this talented young man – from his principal at Knockbeg, mentors of his athletic and hurling club and the local clergy.
Donal’s remains reposed at his parent’s home on Friday 28 August before being removed to St Patrick’s Church, Rathoe for Requiem Mass on the following morning. Burial took place in the local cemetery immediately afterwards.  Huge crowds gathered to pay their final respects and to comfort his family in their hour of grief.
Donal is survived by his heartbroken parents Matt and Noeleen, sisters Deidre, Claire and Maria, brothers Matthew, Seamus and Moiling, grandmother Maggie and by aunts, uncles, cousins, grand-uncles and grand-aunts.
JOHN DEANE RIP 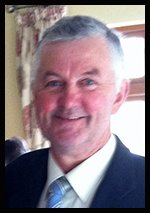 There was genuine and deep regret throughout the Rathoe and Tinryland areas, and indeed much further afield, following the death of John Deane, Moyle, which occurred in St Luke’s Hospital, Kilkenny on Friday 7 August.
Aged 61, John was diagnosed with cancer in August 2014 but he fought the illness bravely and continued to lead as normal a life as possible to the very end.
John married Bridget Byrne from Rathoe in 1977 and the couple had three children, two boys and a girl.  He established his own haulage business early on and also did agricultural contracting and farming.  John’s main interests in life centred entirely round his family and his work.
His remains reposed at his home before being removed to St Patrick’ Church, Rathoe on Sunday 9 August  and burial took place in the adjoining cemetery immediately after Requiem Mass on the following morning.  John is deeply regretted by his wife, Bridget; daughter Lorna McDonagh (Moyle); son John-Ross (Galway);  brothers Ned (Carlow), George (Moyle), Mike (Rathcrogue), Pat (Kildavin), Martin (Boston) and  Joe (Moyle); sisters Ethna O’Toole (Rathbawn), Mary Roche (Moyle); Anne Donohoe (Rathvarrin); Tess Dowling (Burton Hall) and Gerry Hegarty (Killerig) and by his son-in-law, Martin, grandchildren,  Becky, Connor, Allie and Elsie; brothers-in-law, sisters-in-law, nieces and nephews and the extended  Byrne and Deane Families. He was pre-deceased by his parents Paddy and Margaret and by his son Robert  and grandson, Jack. 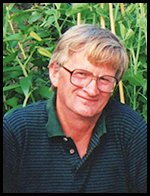 The death took place at St Luke’s Hospital, Kilkenny on Thursday 16 July of Paudie Whyte, Ballymogue, Ballon. He was aged 71 years.  He was one of thirteen children born to James and Kathleen White, Garrettstown, Rathvilly but lived practically all of his life in Ballymogue. His remains reposed at Halligan’s Funeral Home in Rathvilly and at his sister Breda’s residence at Ballinacrea, Myshall before being removed to the Church of SS Peter and Paul, Ballon on Saturday evening 18 July. Burial took place in Ballon cemetery after Requiem Mass on the following day. Paudie is survived by three brothers and four sisters. 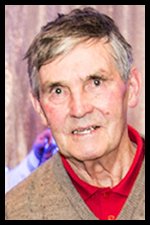 Mr James (Jimmy) Lawler, Ballykealey Lodge, Ballon, whose death occurred at St Luke’s Hospital, Kilkenny on Monday 8 June was a native of Malahide, County Dublin. He was aged 80 years. A mechanic by trade he was a keen golfer in his youth. The family moved to Ballon in 1979 and Jimmy became involved with Burrin Celtic Soccer Club. He also served on the Board of Directors of Ballon/Rathoe Credit Union for a long number of years.
His remains reposed in Kearney’s Funeral Home, Fenagh before being removed to St Patrick’s Church, Rathoe on Thursday morning 11 June. Interment took place in the local cemetery immediately after Requiem Mass.
Jimmy will be sadly missed by his wife, Anne (nee Egan, Rathoe); sons James (Cork) and Pat (Ballykealey); daughter in-law Bernadette; brothers Murty (Dublin), Michael (Dublin) and Pat (Malahide); sisters Phyllis (Cavan), Valerie (Malahide) and Ann (Malahide); brothers in-law, sisters in-law, grandchildren Michael, Andrea and Brian and by other relatives, neighbours and friends 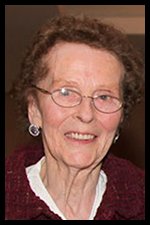 The death took place at St Luke’s Hospital, Kilkenny, on Sunday 7 June of Mrs Vera Kearney, Kilnock, Ballon. Formerly Vera Thorpe from Kilquiggan, County Wicklow  she was aged 91 years. She married local farmer Simon Kearney in 1953 and the couple had seven children.
A deeply religious woman she attended daily mass in Ballon on a regular basis. Her main interests in life were her family especially her grandchildren whom she doted on. Apart from family cooking was her main interest.
Her remains reposed at her home before being removed to SS Peter and Paul’s Church, Ballon on the evening following her death and burial took place in Ballon cemetery after Requiem Mass on Tuesday 9 June.
The late Mrs Kearney is survived by her sons Eddie (Kilnock), Brian (Kilnock) and Simon (Florida), daughters Dolores Gavin (Celbridge) and Noeleen Heffernan (Carlow), sons-in-law, daughters-in-law, seventeen grandchildren and seven great-grandchildren.  She was predeceased by her husband Simon, daughter Odette Hughes and infant son Brendan. 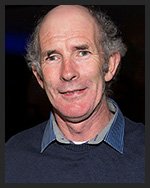 The death took place on Thursday 30 April of John (Jack) Barry, Ballykealey, Ballon. Aged 51, he was the youngest of five sons of Mrs Margaret (Peg) and the late Richard (Rex) Barry, Ballinadrum. He married Carmel Nolan in 1989 and the couple had three children, one son and two daughters. Jack started his working life with Patsy Nolan and Sons Monumental Works and later moved to Amalgamated Fruits, Carlow as a lorry driver. He also worked with John Nolan Tyres, Corcoran’s Precast and Concast in Grangeford.

John was a cheery talkative outgoing man, who could turn his hand to any task. He was particularly fond of anything mechanical and was happiest when underneath the bonnet of a car or fixing lawnmowers. Cutting timber, which provided his family with firewood, was another of his passions. He had a very obliging nature and helped out his neighbours and friends when called upon.

Although he never played football he was an avid supporter of the Ballon and Burren Rangers clubs.

His remains reposed at his home before being removed to the Church of SS Peter and Paul, Ballon on Sunday 4 May for Requiem Mass, His remains were interred in Ballon Cemetery immediately afterwards. Burren Rangers and Ballon GFC provided a Guard of Honour at the removal. 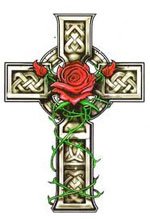 Mr Paddy Kealy, Closh, Ballon whose death took place on Friday 13 March was the last surviving member of his family. Aged 90 years, Paddy worked on the land all his life. His remains were removed to the Church of SS Peter and Paul, Ballon on the evening following his death and burial took place in Ballon Cemetery after Requiem Mass on Sunday 15 March. Paddy was predeceased by his brothers, Tom and Paul and sister, Josie English.

The death took place in Kilkenny Hospital on Monday 16 February of Miss Margaret (Maggie) Byrne, Glenogue. She was aged 92 years. Maggie worked as a housekeeper in Dublin in her early years but spent most of her life in Glenogue looking after her siblings. Her remains reposed at Byrne’s Funeral Home in Tullow before being removed to St Patrick’s Church, Rathoe on the evening following her death. Burial took place in Rathoe cemetery following Requiem Mass on Wednesday
18 February. Maggie was predeceased by her sisters Molly and Kitty and brothers Johnny, Larry and Willie. 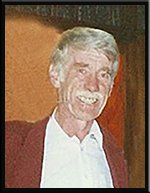 Mr Robbie Curry whose death took place on Wednesday 20 January in Brighton, England, was formerly from Miltown, Kilbride. Son of the late Bob and Marie Curry he was aged 74 years and had emigrated to England as a young man. On leaving school he joined the Army Band in Cork and played basketball at a high level including representing Ireland at international level. His remains were interred in Brighton. Robbie is survived by his wife Sheila, daughters, Fiona, Lorraine and Julie; son Trevor and grandchildren all in England and by his brother Paddy (Dublin), Tom (Miltown), sisters Lizzy O’Brien (Carlow), Frankie Quinlan (Ardattin), Sally McWilliams (England), Bridie Brooks (Carlow), Anna Mary Codd (Dublin) and by other relatives and friends. 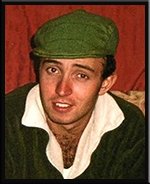 The death took place on Wednesday 7 January of Stanley Nolan, Director of Nolan Tyres, Ballon. The eldest son of Marian and the late John Nolan, Stanley was in his 35th year. A very quiet and unassuming man his main interests were films, music and travelling and in recent years had discovered a passion for golf.
His remains were removed from his home in Bunclody on Saturday morning 10 January to the Church of SS Peter and Paul, Ballon for requiem Mass and burial took place in Ballon Cemetery immediately afterwards. His colleagues at Nolan Tyres and Texaco Filling Station formed a Guard of Honour as the cortege entered the village.
Stanley will be sadly missed by his mother, Marian, brothers Cormac and Shane, sisters Bridget and Emma, aunts, uncles and friends and by his work colleagues 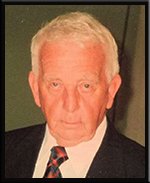 The death took place at the Sacred Heart Hospital, Carlow on Wednesday 14 January of Jimmy Nolan, Ballynunnery, Rathoe. He was aged 84. In his youth Jimmy served in the army where his duties entailed driving President Sean T O’Ceallaigh. He later worked as a driver for various individuals and companies in the local area.  He retired from is final job, that of caretaker at Rathoe  National School in 2007. On retiring he spent his time looking after his collection of small farm animals and pursuing his great love of fly fishing which he did on the river Slaney. Jimmy was very active in the community particularly with Rathoe Hall and Rathoe Sports Complex and was also involved with the local water scheme and Community Alert.
His remains reposed at Kearney’s Funeral Home in Fenagh before being removed to St Patrick’s Church, Rathoe on the evening following his death and burial took place in the adjoining cemetery after Requiem Mass on Friday 16 January.
Jimmy is survived by his daughters Mary Nolan (Carlow), Pat Fox (Kellistown) and Clare Scully (Ballinunnery); his sons Shane (Kellistown) and Tony (Augha); brother Tom (Fenor, Waterford), grandchildren, great-grandchildren and by his sister-in-law, brothers-in-law, nephews and nieces. He was pre-deceased by his wife, Joan, in 1992.