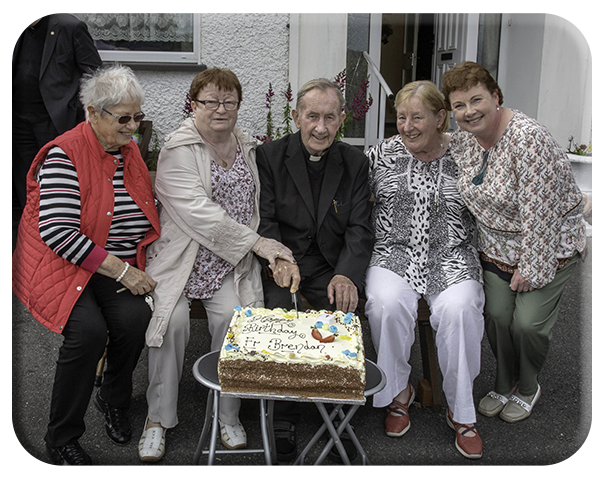 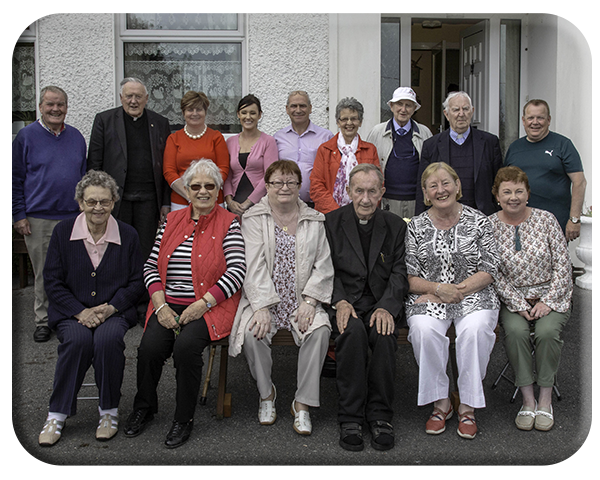 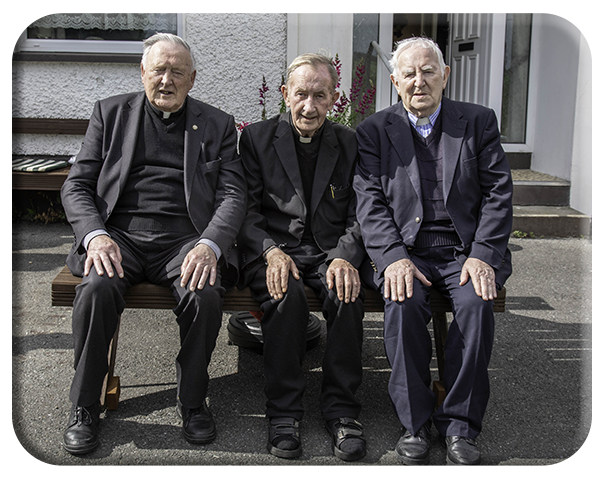 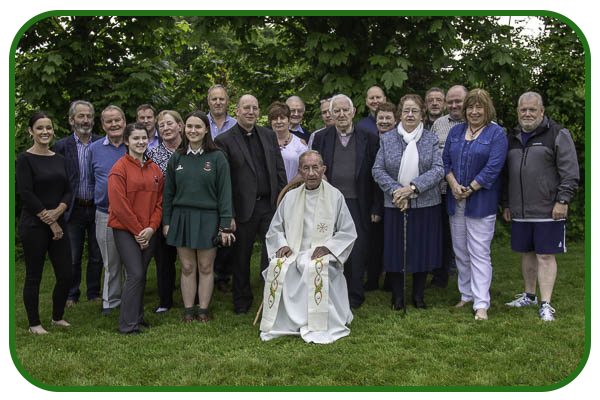 Family, friends and neighbours met in Clonegal to celebrate his 76th birthday. 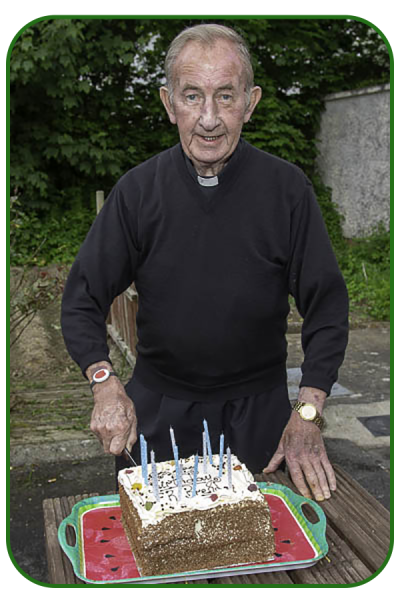 Representatives from the Parish Council and Ballon Community & Sports Centre committees gathered at the home of Fr Brendan Howard in Clonegal to mark the occasion of his retirement having spent the last nine years as Parish Priest of Ballon/Rathoe parish.  Fr Howard was appointed Parish Priest in June 2008 and he came to Ballon in August of that year undergoing the rite of Installation on 14 September. He retired on 31 July this year.During his tenure in Ballon/Rathoe Fr Howard enjoyed working on several committees some of which he is still a very active member. He was chairman of the boards of management in both local schools.

Although he has retired Fr Howard is obviously not going to let the grass grow under his feet as he was gifted with a ride-on lawn mower which will come in very useful in his extensive garden. 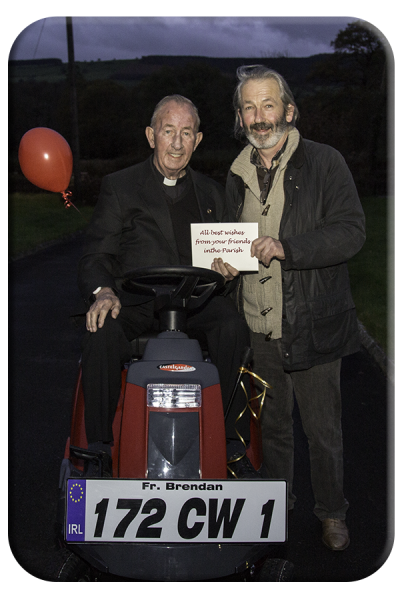 Prior to the presentation John Behan, chairman of the Parish Council paid tribute to Fr Howard for all the great work he had done in the parish since his arrival in 2008.  Fr Jim O’Connell ADM also paid fitting tribute to Fr Howard and wished him a long, happy and healthy retirement. All members of the groups were made very welcome in Fr Howard’s home and a very enjoyable evening was had by all. 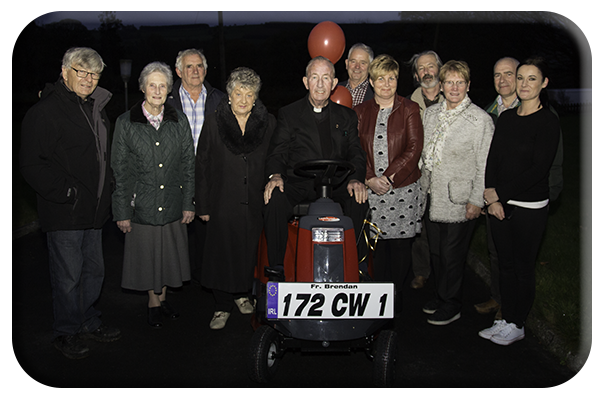 Fr Brendan Howard retired as Parish Priest of Ballon/Rathoe on Monday 31 July having served there for nine years. 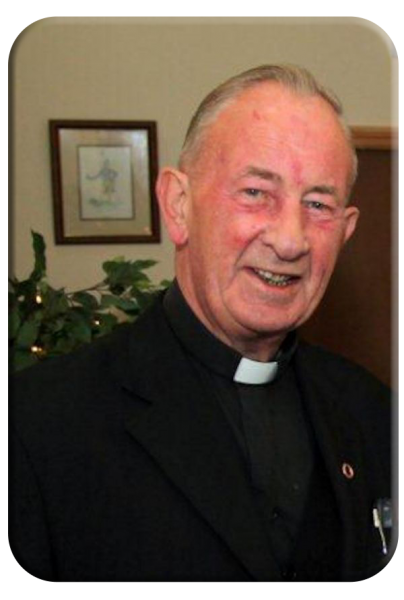 Fr Howard was installed as Parish Priest by Dr James Moriarty, Bishop of Kildare and Leighlin on Sunday 14 September 2008 in ceremonies at both St Patrick’s Church, Rathoe and the Church of SS Peter and Paul, Ballon.

As well as ministering to his parishioners Fr Howard was involved in the refurbishing of the old national school in Ballon, the building of the new community centre, was chairperson of the parish council and the board of management of Ballon NS and also chairperson of the Mount Leinster Region Community Employment Scheme.

A Christian Brothers from 1956, Fr Howard dispensed from his religious vows to the Brothers in 1996 and was ordained a Deacon for Kildare and Leighlin. He was ordained to the priesthood by Most Rev Dr Laurence Ryan DD in the Cathedral of the Assumption, Carlow on 6 July 1997.The following day he celebrated his first mass in the Cathedral – his own parish. His first appointment was to the Cathedral parish from 1997 to 2000 and was then appointed to Myshall/Drumphea parish until 2008.

Fr Howard was born at Ardreigh, Athy on 24 May 1942, his family moving to Jerusalem, Carlow soon after. He attended Levistown NS and Bishop Foley School in Carlow before moving to the CBS Academy, Carlow for his secondary education.

In 1956 he joined the Irish Christian Brothers at St Joseph’s Baldoyle and continued his education there and at Colaiste Ioghaid Ris, Dun Laoghaire. He qualified as a primary teacher in St Mary’s Marino in 1966 and went on to teach in Limerick, Portarlington, and Drimnagh Castle, Dublin before taking up secondary teaching at the latter school from 1972 to 1975. He was Superior and Manager at St Brendan’s College Bray, CBS, Portlaoise, Colaiste Eoin, Athy CBS, North Monastery, Cork and St Mary’s CBS, Kilkenny between 1977 and 1993.

In 1993 he enrolled at the Jesuit School of Technology, Berkley and obtained a Masters of Theological Studies in 1995 before deciding to become a priest.

Throughout his life Fr Howard has been immersed in the GAA was secretary of the County Limerick Bord na Nog to be followed by a similar position in County Laois and as his teaching took him across the country he was involved with clubs in places as diverse as Bray, Portlaoise, Athy and Dicksboro. He has served as president of the O’Hanrahans Club in Carlow, Naomh Eoin, Ballon, and was chairman of County Carlow Coiste na Nog and Irish Officer for County Carlow.

Fr Howard was involved in many other sports including athletics and from 1966 to 1969 was president of the newly formed BLOE; he was involved with CBS Portarlington and North Monastery, Cork when they won national titles in basketball and was a founder member of Athy Boxing Club in 1986.

Fr Howard was one of the first to promote alcohol free discos in Walkinstown in the late 1960s and was also involved with the Legion of Mary in many centres.

Another of Fr Howards many and varied interests include Tidy Towns and he served on the committees in the many towns and centres in which he worked.

As he leaves to retire in Clonegal Fr Howard is wished a very happy retirement as well as a speedy recovery from his recent period of poor health.