Very Rev. Edward Whelan PP, Ballon/Rathoe celebrated the 50th anniversary of his ordination to the priesthood on Sunday, June 22nd 2008. Exactly 50 years to the date.

Fr. Whelan, a native of Hacketstown Parish, was ordained in Maynooth on June 22, 1958 and spent the first year of his priesthood in Liverpool. He then ministered in the parishes of Rathvilly (1959-1968), Daingean, Co. Offaly (1969-1982) and Nurney, Co. Kildare (1982-1987) before being appointed to succeed the Very Rev. John Flood as Parish Priest of Ballon/Rathoe in 1987.
He also holds the position of Chaplain to the Apostolate of Perpetual Eucharistic Adoration since 2007.

Fr. Whelan, who is a deeply religious man is particularly known for his kindness to the sick of his parish and is a regular visitor to those in hospital and those who are housebound.

During his twenty-one years as Parish Priest, Fr. Whelan has had major renovations and redecorations carried out to both Ballon and Rathoe Churches and built a new Parochial House in Ballon.
Fr. Whelan, who has been convalescing following illness, returned to the parish and celebrated masses in both Ballon and Rathoe on Sunday to mark his anniversary.

In his address he thanked the people of Ballon and Rathoe for their goodness to him and for their prayers during his 21 years as Parish Priest. He said that a priest very much depends on the prayers of his parishioners to keep faithful to his priestly calling. “When I was ordained in 1958 there was about 60 of us. In 2006 there were only four ordained. That tells its own tale.

When I was ordained I promised solemnly to serve God faithfully to ‘declare him before men’ in the words of today’s Gospel. I thank God for the great help he gave me to fulfil my priestly promises and ask his mercy for my failures”, he said.
Fr. Whelan went on to recall all the changes in the 50 years.

“There have been six Popes and four Bishops of Kildare and Leighlin. My first mass was completely in Latin and was much longer, There have been changes in every aspect of the Church Life. But there are some things remaining and always will- such as the Mass and Sacraments and the need to keep the commandments” he said.

He welcomed his successor Fr. Brendan Howard who will take up duty on September 1 and wished him every blessing and happiness and described him as a ‘great priest’. 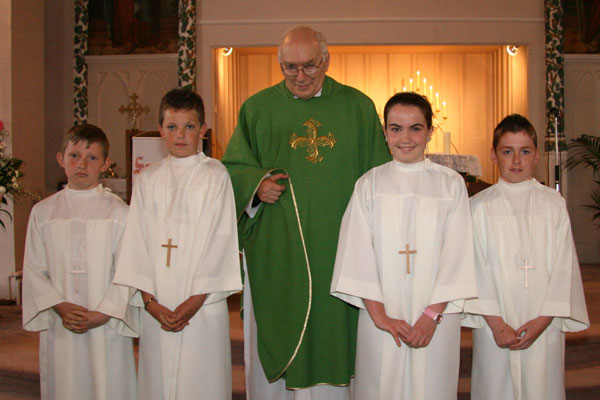 Church servers on the day.

Fr. Whelan concluded by thanking the Bishop for allowing him to remain in the house in Ballon and said that he would continue in the Pastoral Work of the Parish.

(Thanks to Michael Dawson for the narrative)

There he was presented with a picture collage of some of the recent school events he attended. 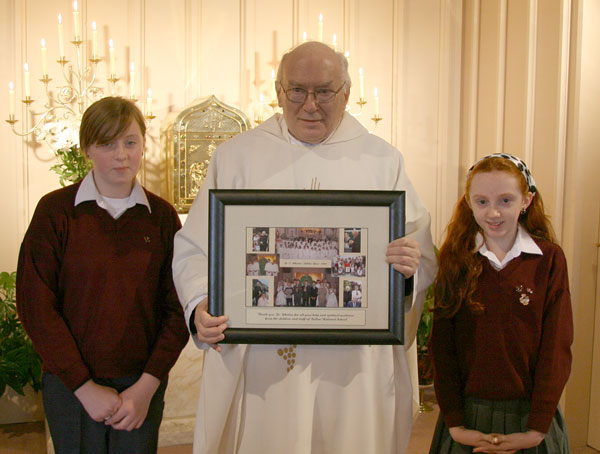 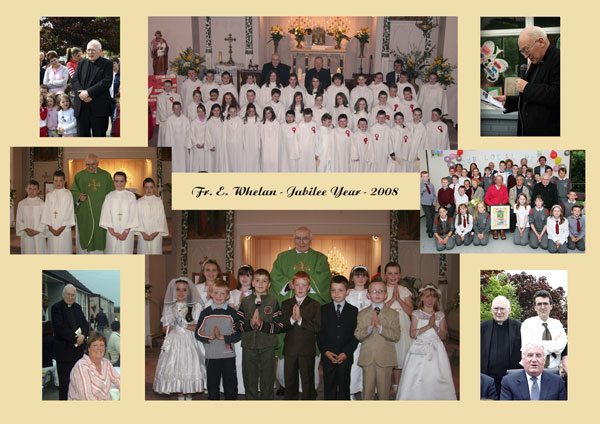 Church servers for the year with Fr. Whelan and Sacristan Kathleen Condron. 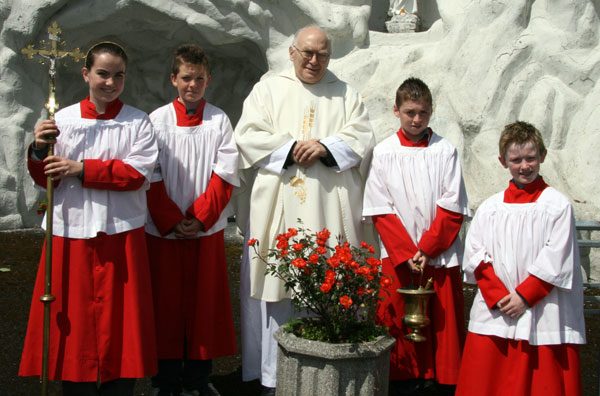 …followed by prayers in the Grotto 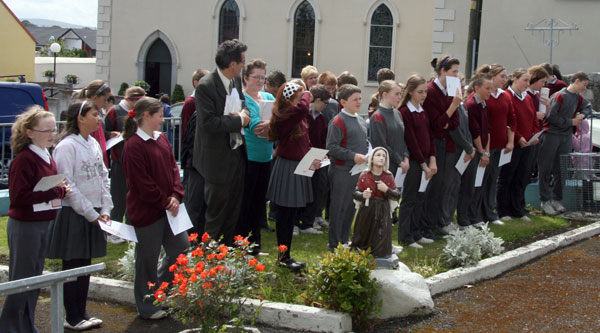 The Rev. Lester Scott makes a presentation to Fr. Whelan on behalf of his group of parishes. 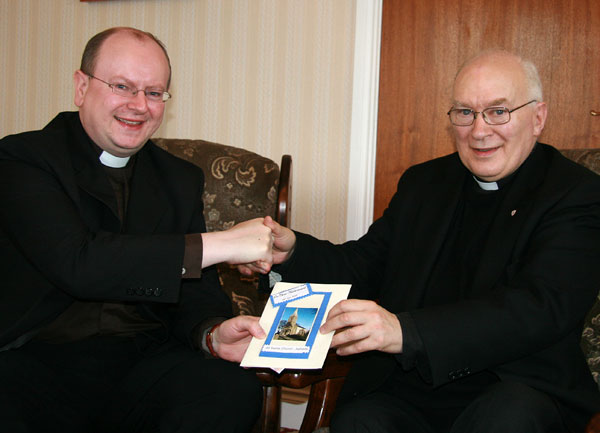