……Lounge and Off License 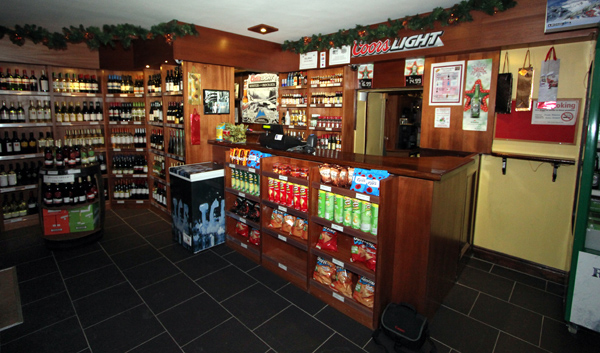 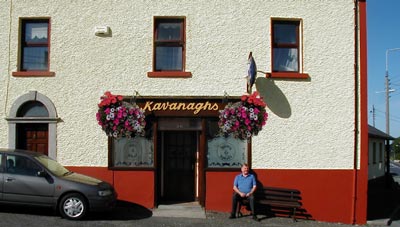 Situated at the main cross in the village and run by Mick & Paul Kavanagh. Mick’s father Tom married May Morris whose family originally owned the premises. The building was erected c. 1850.
(This is the year that Levi Jeans were first made for Californian gold miners)
At that time it was the small corner shop trading as a pub, drapery and small groceries. In c. 1985 the stores and bottling room were demolished and the new lounge area was added.

The photograph (courtesy of the Chronicle) was taken about 1928 when it was owned by the Morris family..
In the photograph, left to right, are Pat Morris, Garda Michael Lynch and his son John Lynch.
John sent the photograph and now lives in Wexford.
From notes by Nancy Abbey, Ballon Hill, there was a soup kitchen set up in the yard of the pub during the war.
(Dates for this are uncertain but if anyone has more info. please tell the Webmaster)
(In the same year Penicillin was discovered by Alexander Fleming and Micky Mouse was first introduced by Walt Disney). 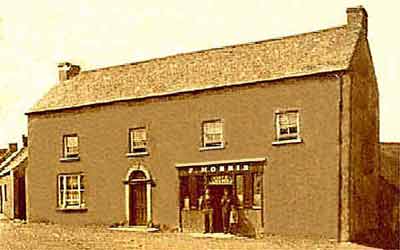 At the wheel is Attracta Kananagh’s grandad, Pat Fenelon (1874 to 1934), by which we approximate the date to about 1914.
On his left is the grandad of Mick and Seamus McGrath of Ballon. We are looking for an owner of the third man – any offers? – no reward !. Where was the photo taken?

Bozi writes (18/3/02):
Slight question on the Grandad photo. I thought it was a De Dion Bouton Populaire of approx 1904 but seems to have wrong steering wheel and running board. I am advised by wiser people than me that it is probably a 1903ish Darracq. Body and bonnet are very similar on both but the front dumb irons and the steering wheel, mainly the manual control levers apparently suggest the Darracq. Darracq had that type of bonnet for a very short time. Not a positive identification although the info on the Darracq is from a senior bod in the VCC dating Committee. The car registration is from Liverpool.