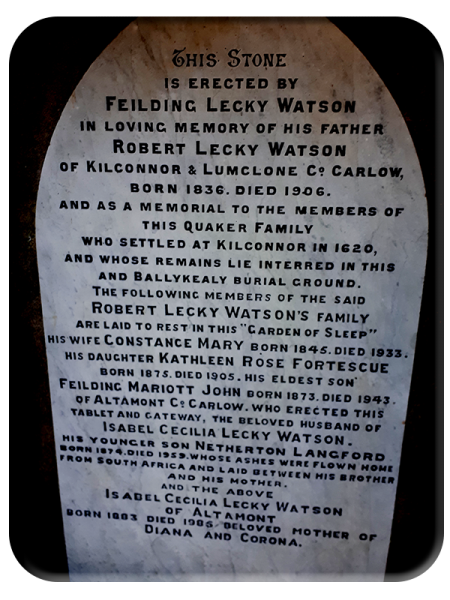 In 2007 BIG explored what might be done to enhance the village’s heritage profile.

We decided that a Notice for these graveyards would be appropriate. John Smyth explored the historical aspects with an input from Hope Morris and Penny Alston (nee Lecky). Gradually the material was collected with Michael Martin doing the graphics with guidance from John Smyth and Alison Harvey on the design layout. The final result was an interesting potted history of the times and the people.

The design was then sent to Carlow Graphics for making up the board at which time The Chronicle committee offered to sponsor the cost.

The finished product was excellent and local firm Kevin Doyle Carpentry and Building were asked to make a suitable hardwood frame. This first class job was completed today (12/5/07) and mounted on the perimeter wall as reached from the ramp. Kevin said that he would sponsor the frame as his contribution to the village and at no cost to BIG. 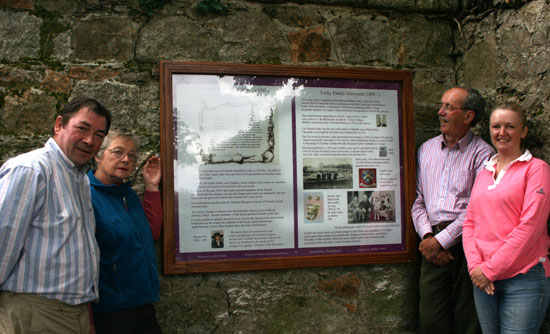 Last year John Maher of Celtic Stone made and sponsored the limestone markers identifying the graveyards and mounted at the base of the ramp.

And coupled with this we have had great support from CCC’s Bagenalstown engineer, Ray Wickham and foreman Eamon Coughlan; and Bernie O’Brien Director of Services CCC.

Isn’t it great to see such a community endeavour and co-operation?

View the pdf format for the Heritage Board below.

Lecky and Quaker Heritage Board