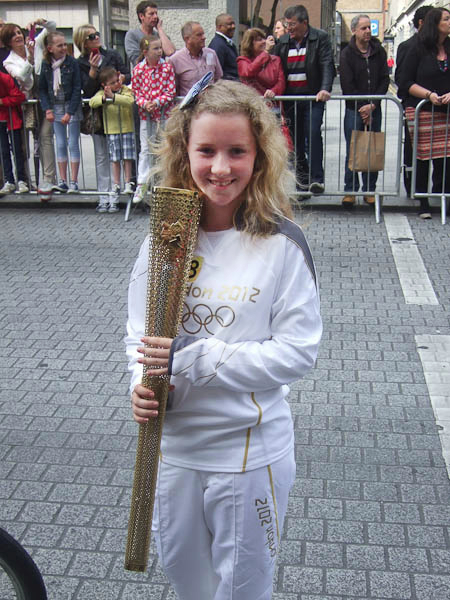 MY DAY AS AN OLYMPIC TORCHBEARER

I had to be in Croke Park at 7:15am so I got up about 6:00am because I had a lot of time to get ready and have breakfast. After that we got a taxi from the hotel we stayed in, to Croke Park which took about 15mins and once I arrived the security only let my mum into the Croke Park Museum with me, so my brother and dad went across the way to have a tea. There was tea and coffee and a bit of breakfast in the museum so who ever didn’t get breakfast could have some. People started arriving after 5-10mins but everyone seemed very tired until Jedward arrived! I was chatting with Anne Ebbs who was running for the Paralympic and who competed for Ireland in 3 Paralympic games. In 1987 she set up the Paralympic Council of Ireland and was working with them for 21 years. She had her niece running with her in the relay. I was talking to Shane Horgan as well because I was passing the torch to him and he was very kind. Henry Shefflin was there too, he was very busy with interviews and all because he did the new Sky Line on the Croke Park roof! Jedward were very funny and entertaining, we had a practice torch run with a small bottle of water. A 12-year-old boy named Garrett Myhal was running in memory of his dad Paul Myhal who unfortunately passed away earlier this year. His dad was a very good athlete and did a lot of fundraising for charities. Once I got my track suit mum left and all the torch bearers where brought into a room for a quick briefing about what would happen in the day. Shortly after that we were all brought outside to a shuttle bus and brought out on the route. We had only got outside the entrance when we had to stop for a check to make sure everything was ready. We were there for about ¾ of an hour. Lots of fans were there to see Jedward and a boy’s school was there and then a girl’s school turned up and didn’t stop screaming! We dropped off Brian Brunton at his hand over point and then started moving on to the next stop which was Robbie Lyons place. We were slowed down a lot because fans kept crowding the bus and getting us stuck! But finally we got to number 007 which was of course Jedwards stop! Then it was my turn. I was shaking and shaking. After that I got off the bus when a man on a bike came up beside me and talked me through what would happen again! I got lots and lots of pictures then while I was waiting and my friend Ladine Fisher had come up from Ballon to see me run! A bus went up from Ballon Rathoe Community Games. After I got photos taken a coke-cola truck came up with people running beside it and they all gave me big hugs! Then a Samsung bus came and the same happened. Now a group of men came and Jedward were there ready to pass the flame to me. They were very happy and told me to take my time running because it goes so quick! Then we got lots of photos with the torch Passover which is called the Torch Kiss. Soon enough I was running down O`Connell street with loads of people roaring my name! It was so much fun I can`t explain it. Jedward were right because it only felt like 10secs not 4mins! My Granny and my Godmother where at the end where I gave it to Shane Horgan, My mums friend Carol Morahan was there too. Shane Horgan gave me a hug and a kiss when I gave him the flame and he kept saying thanks. After that I had literally 20secs before I was on another bus and with the rest of the group. We were on that bus for around 2 hours because we got held up with more fans. Then the guards came and cleared the way. We then went to St. Stephens Green because there was dancing and other things on but we were soon outside the Mansion House with even more singing girls for Jedward! We spent about half an hour outside with our families until all of the bearers where brought inside a room for water and juice. But that was only for 15-25mins before we were brought into the round room to have lunch with the Lord Mayor of Dublin. I sat down at the table I was told to go to when Jedward came up and sat at the same table as me! I love Jedward. This was very exciting. They were very nice and their mam, auntie and tour manager was there! We all had a nice chat when the food came and they asked me about camogie and football. They told me they played hurling in school. Then people came up looking for pictures and autographs from Jedward. They were very good and didn’t refuse one autograph even when they were eating! We all just talked and walked around then, but then Jedward had to leave. Shortly after we left too. We finished about 3:30pm.