A Tribute to Paddy Nolan 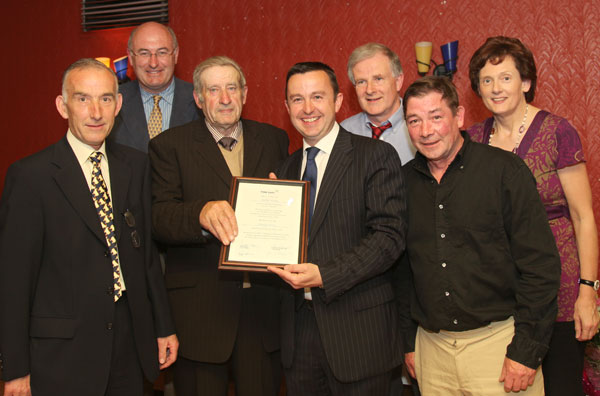 The Ballon Fine Gael branch combined two important celebrations at a social evening in Joe Doyle’s lounge on Friday 21 May. The event, which marked the 75th anniversary of the founding of the branch, also provided an ideal opportunity to honour Paddy Nolan, the longest serving member of the organisation in Ballon. The guest of honour for the evening was Brian Hayes, TD, the party’s front bench spokesperson on education, and among those also present were Phil Hogan, TD, Senator John Paul Phelan, former TD John Browne and a number of councillors. The branch chairperson, John Smyth, paid tribute to Paddy Nolan and spoke of his dedication and loyalty to the party. Paddy’s standing in Fine Gael, he said, was but a mirror image of his standing in the wider community where he is highly respected and admired. In his address to the gathering, Deputy Brian Hayes said that he was delighted to be in Ballon to honour a member of the calibre of Paddy Nolan. He then presented Paddy with a framed long service certificate signed by the party leader. John Smyth then presented Sheila Nolan with a bouquet of flowers. Deputy Phil Hogan and Cllr John Murphy also spoke with the latter recalling Paddy’s contribution – and his enthusiasm – during last year’s local election campaign.

Referring to the branch’s 75th anniversary, the local secretary, John O’Donovan, said that it was important to mark this particular milestone and to acknowledge the different generations of members that had ensured a continuing presence for the party in Ballon. It would be impossible to mention all the individuals that had participated over the years but, on this occasion, it was fitting to recall the branch’s first officers and committee. The records show that the first meeting of the branch was held in Ballon on Monday, 5 February, 1934 and the founding officers were: Honorary President, Rev. J. Lawler PP, Rathoe; chairman, John O’Byrne, Ballinadrum; vice chairman, Thomas Fitzpatrick, Rathrush; secretary, J. Corcoran, Ballinvalley and treasurer, Patrick Donohue, Ballon.
Committee: A. Webster, Sherwood; J Murphy, Conaberry; J. Dawson, Ballykealey; John Donohoe, Rathrush; T. Rothwell, Bendenstown; Michael Doyle, Rathrush; W. Corrigan, Ballon; R. Keppel, Rathrush and J. Moore, Aghade 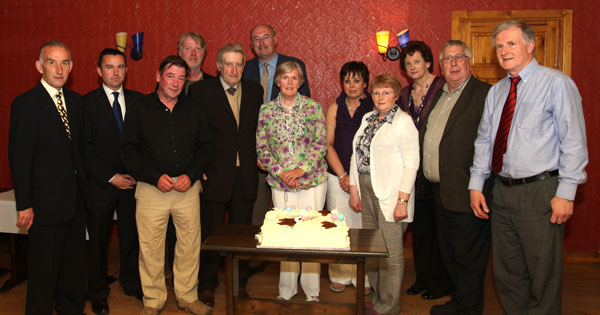 Paddy and Sheila with local party and guest speakers.