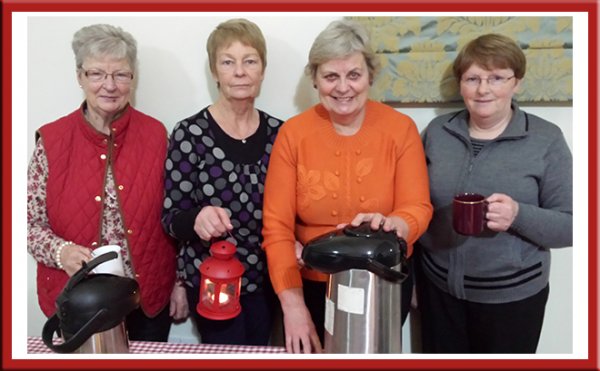 Drinking up and winding down

Great ideas for using up spare food after Christmas 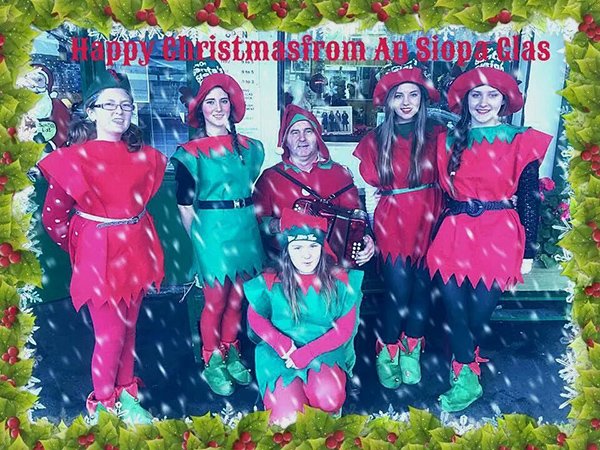 This was a great success this year and Siopa thanks ALL that played a part. We are lucky to have such dedicated and consistent volunteers. It’s an example of what can be achieved when good will comes through the door and ego goes out of the window. 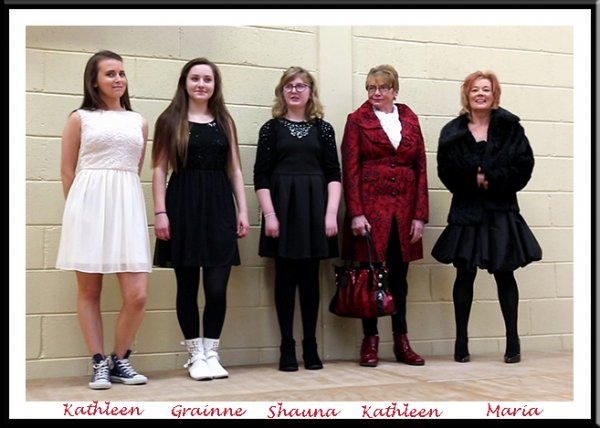 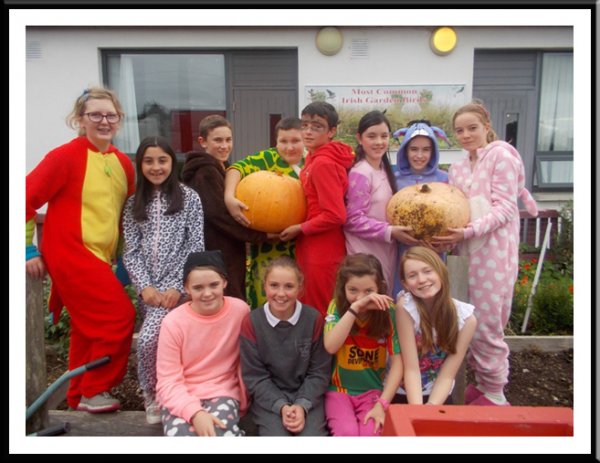 The school Gardening club picked their two giant Pumpkins just before the Halloween Break.  The Pumpkins are on display in the Siopa Glas, Main St. Ballon for the next week.

On Friday the 30th Oct  from 1pm until 3pm  Siopa Glas will host a Pumpkin Soup day with an open invitation to all to call in and have a delicious bowl of home made yummy Pumpkin Soup. 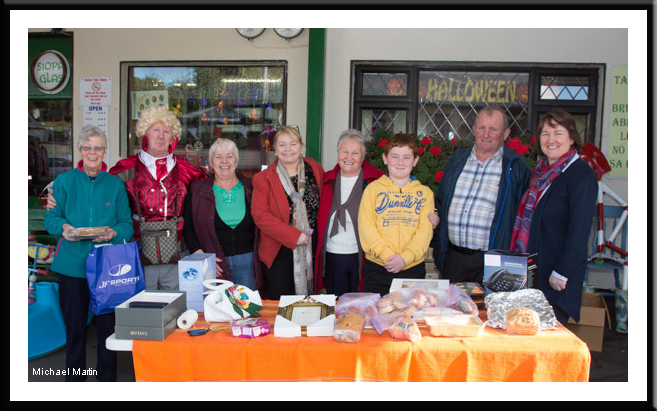 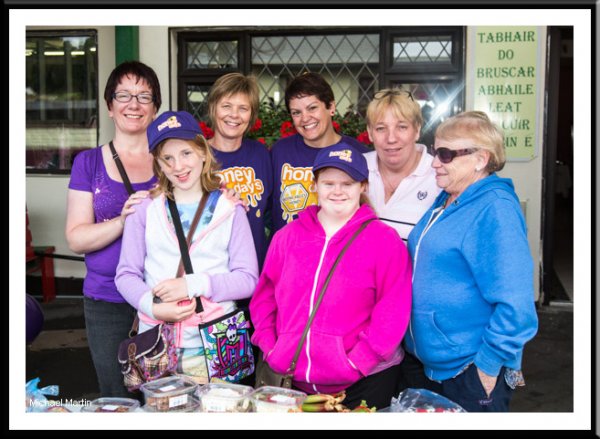 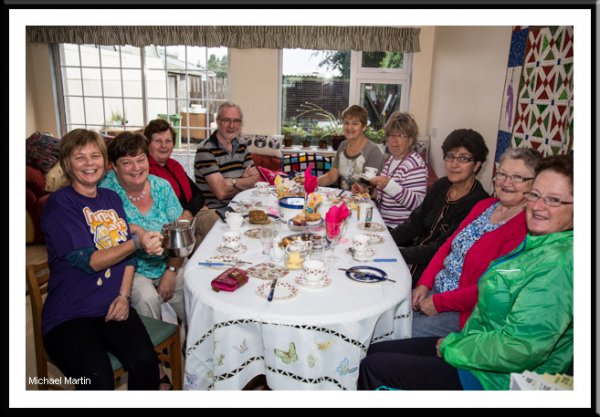 Some local supporters enjoying a cuppa and a chat

The “F1 in Schools Technology Challenge” is the world’s largest Science, Technology, Engineering and Maths programme involving more than nine million second-level students across 33 nations. The competition involves not just the design and manufacture of a miniature Formula 1 car from balsa wood using the latest engineering and CAD software, but also the marketing, promotion and project management of the entire process. Each car must comply with real life F1 car standards and regulations, and will cover a track 20 metres long in less than 1.5 seconds, powered by a pressurized CO2 gas canister. 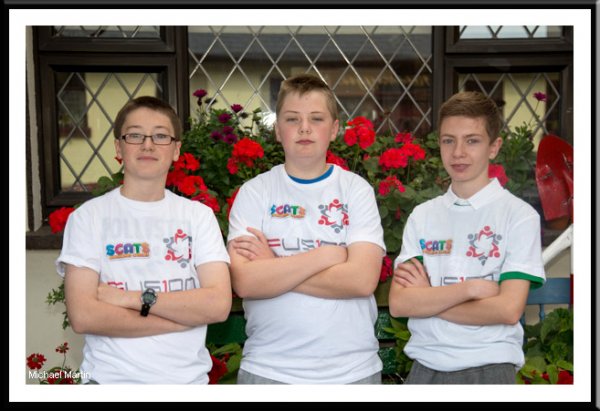 The boys – Tadhg Downey ( Ballon), Jordan Hennessy ( Killeshin) and Matt Jordan (Clonmore) all 2nd year students in the Presentation College Carlow – competed as “Renaissance Racing” in the National qualifiers as first year students – winning regional heats and then going on to win the national junior title. As a result – they then qualified to compete in the World Championships this November in Abu Dhabi, alongside the Senior winners – also coincidentally from Presentation College Carlow.

Since the national championships, the team format and name has changed. Now called “Fusion F1” – the boys joined forces with a group of students from Dubai ( team tachyon) hoping that with their combined skills and knowledge – that they can bring home the World championship.

With huge project costs being incurred to develop a top-class entry, the boys arranged a weekend of fund-raising events – with something for everyone ! Events kicked off with a coffee morning, kindly hosted by Siopa Glas – followed by a variety concert that night in the Presentation College Carlow.  On Sunday – the Big Bounce was held in the school grounds – offering such fun attractions as the largest bouncy slide in Ireland – and a dunk tank – where several teachers & Ballon’s own Rachel Pilkington kindly surrendered themselves to a soaking by the General Public. 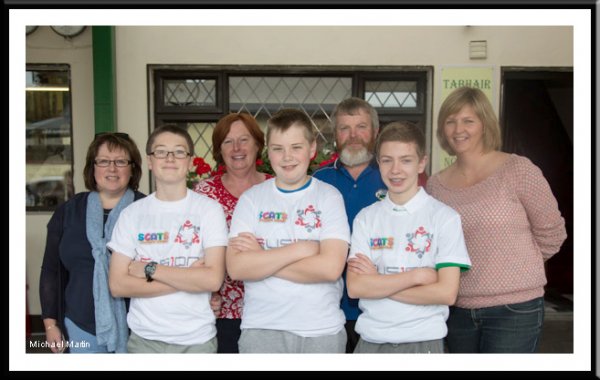 Everybody has been so generous in every way to the lads – volunteers & supporters alike – and they would like to thank everybody most sincerely for their kindness. 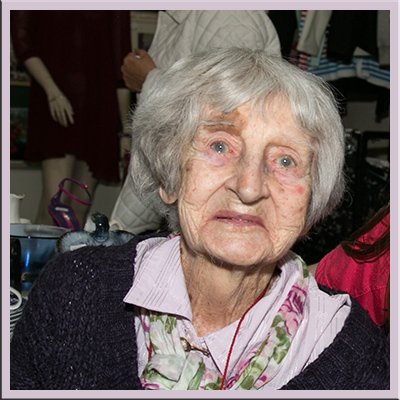 Our Oldest Shopper at 104

Nellie McKenna on her first outing after a hip replacement was taken on a shopping trip to Siopa Glas by her nieces Maeve McKenna and Eileen Doran. Chatting during tea she entertained us with stories of the past and had a brilliant recall of events. She had a lot in common with with some of her guests. My favourite story was when she was presented with the annual medals for the 100 pluses. Sabrina Higgins herself called and presented the medal only to be told by Nellie that she went to school with her mother.

Nellie, originally from Cork, then Dublin and Duncannon now resides with great comfort and attention in Knockeen Nursing Home, Wexford. Moderation in all things is the secret she said spooning two sugars into her tea. Her hobbies are reading and painting; and she is still selling them. 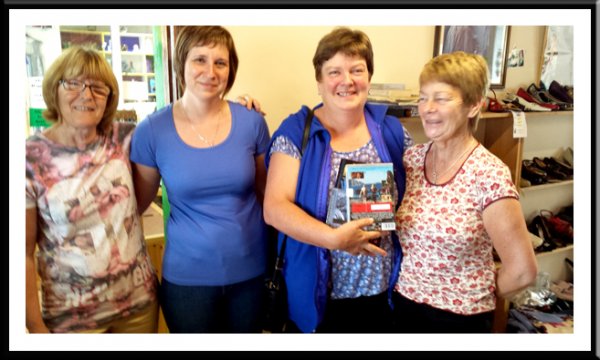 Out came the best china, the doilies and napkins. Table manners and etiquette were recalled from times past as the guests sampled the tea and a cornucopia of farinaceous products to suit every palate, well nearly, gluten free was overlooked. All donated by the village people who lend support to these occasions. 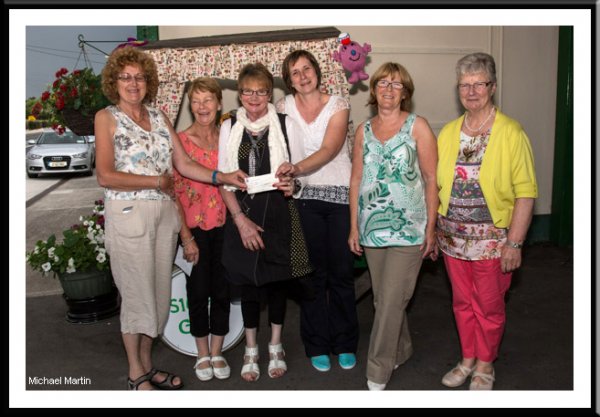 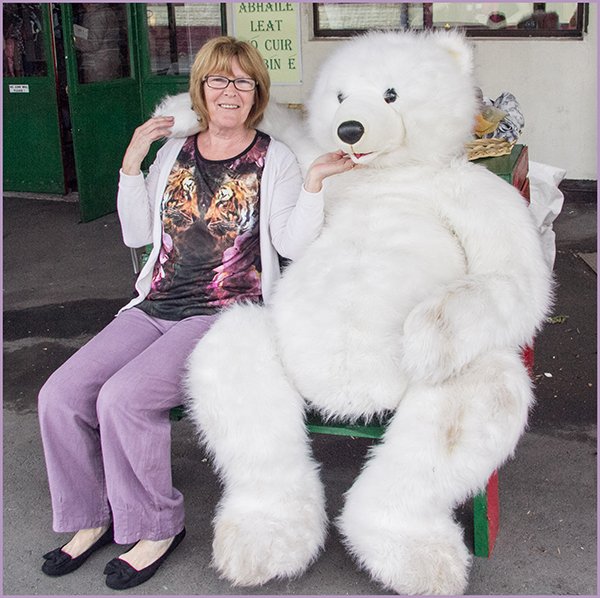 Marian Doyle getting close and personal 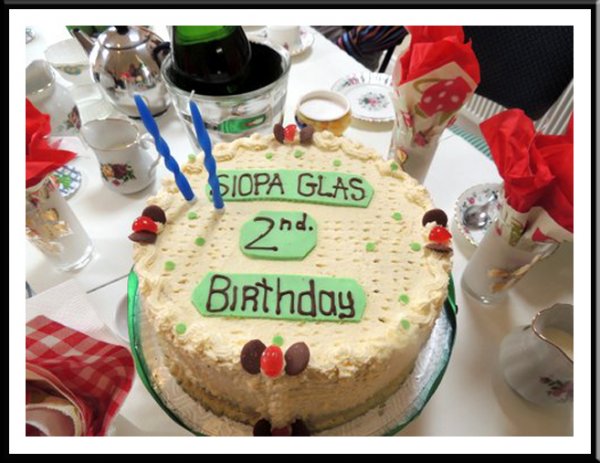 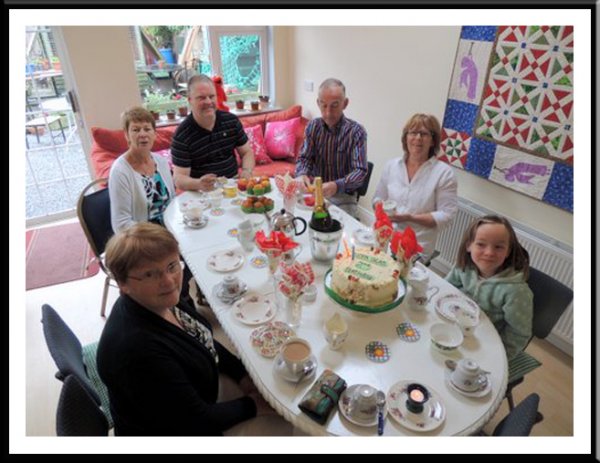 Siopa Glas says a huge thanks to all the village supporters. Is Feidir linn!

Siopa Glas will be celebrating their 2nd Birthday on Sat 7th June.  Everyone is invited to call in and join in the festivities 10am to 3pm and bring a friend. 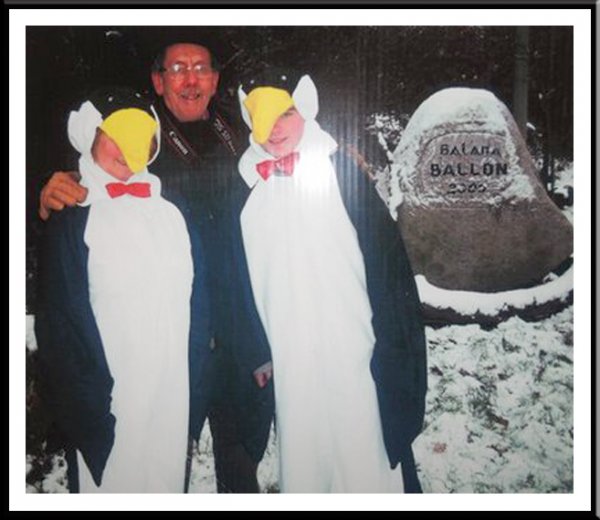 A pre Siopa Glas pic but we were thinking into the future.

Penguins sighted for the first time in Ballon Always knew that the place was teaming with wildlife!!!! 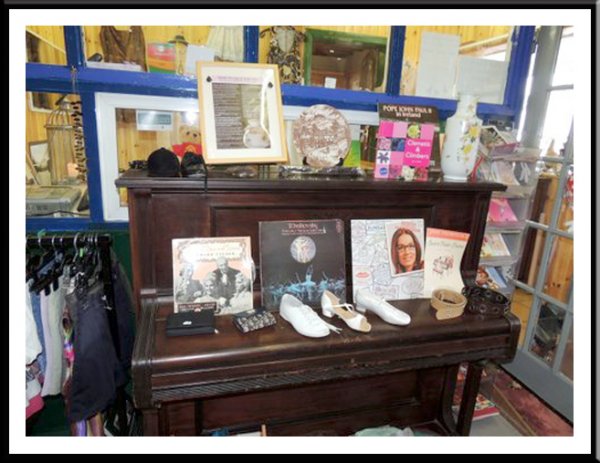 This is the Music section at present in Siopa Glas.  May 2014 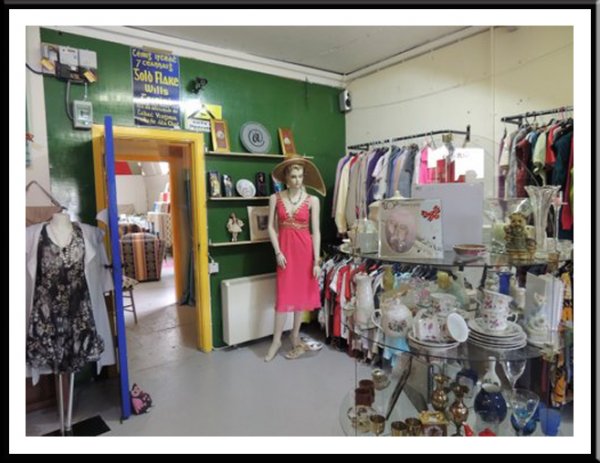 A multitudinous selection in the front shop 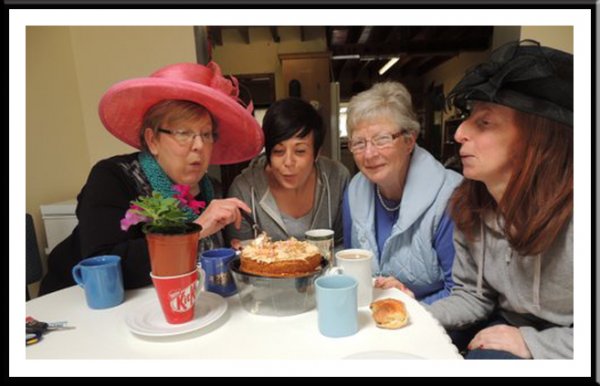 Guess who has reached 50? 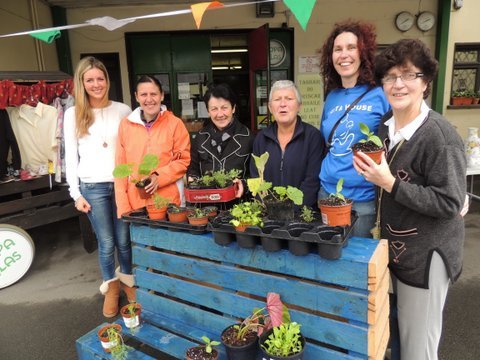 Garden enthusiasts at the recent ‘Seed and Swap’ at Siopa Glas 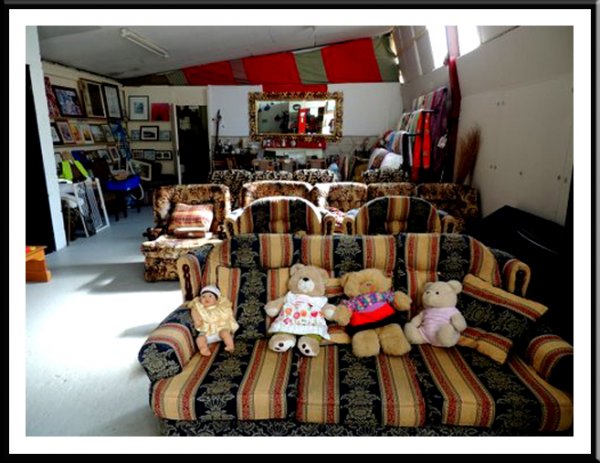 Lovely selection of three piece suites at the Siopa Glas.

Call in soon to view our trendy Spring Collection 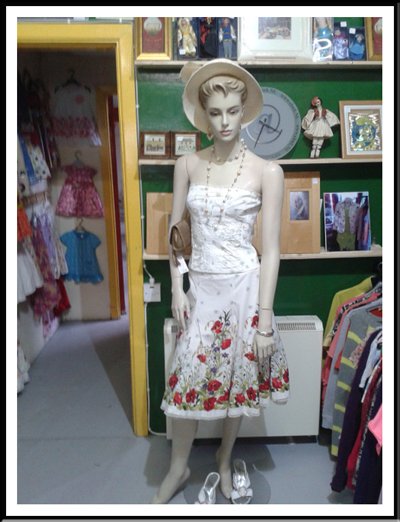 Open a “Siopa Glas” – like Ballon in County Carlow
Why no

t open a ‘Siopa Glas” staffed by local volunteers like Ballon village in Co. Carlow has done.
The shop’s aim is to minimise waste in the community by providing a friendly service for taking unwanted items off peoples’ hands, while at the same time giving a local opportunity to get high quality clothes, furniture, household items, books and vintage bits and pieces at knock down prices. Bird boxes and bird tables made by the local Mens’ Shed have also been sold from the Siopa.
The Siopa Glas is now the main source of funding for the Ballon Improvement Group and the money raised is used to enhance the village, the Ballon school garden and the wildlife area. A regular garden swap shop is held too.

Why not join Una and Charlotte for a session of retail therapy. Try out our comfy retro chairs. Available at knock down prices.
Local newspapers always there for browsers. 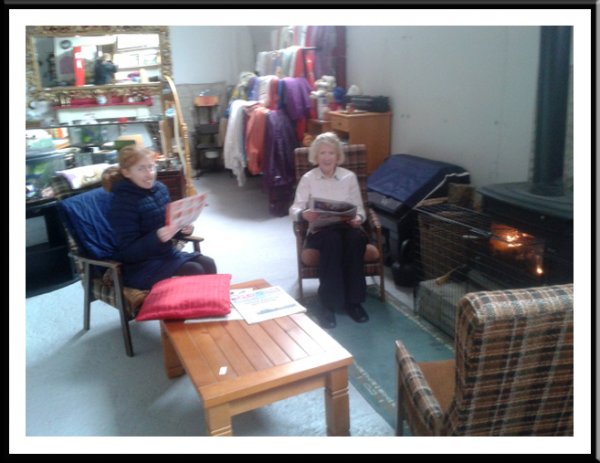 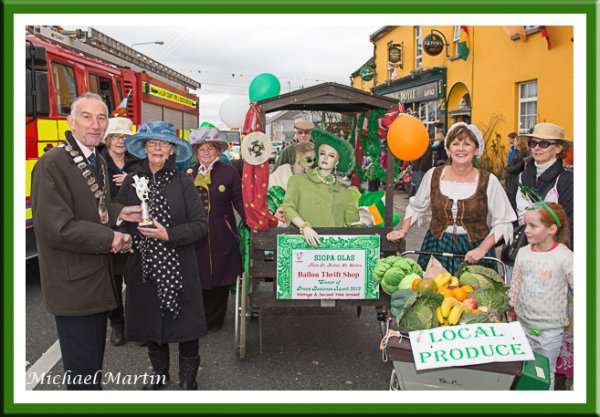 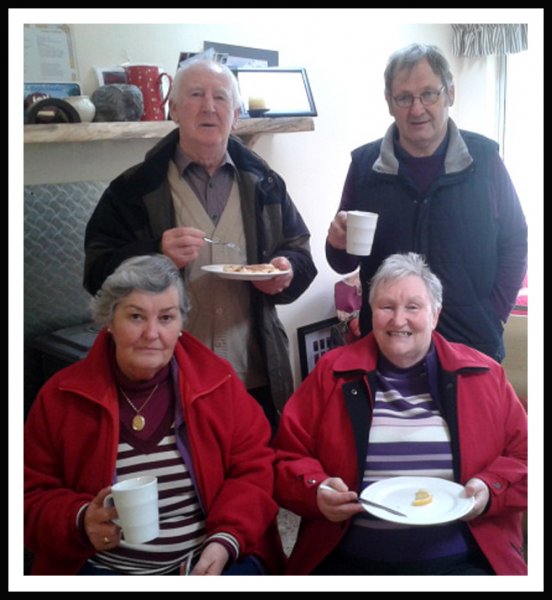 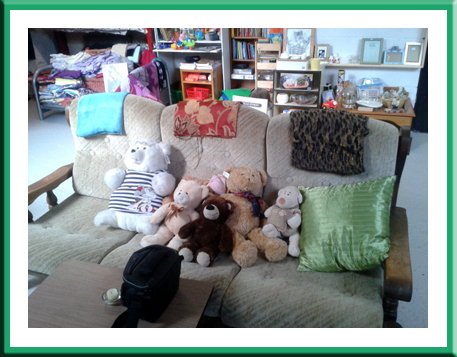 Siopa Glas thanks all who have donated goods to the community thrift shop. 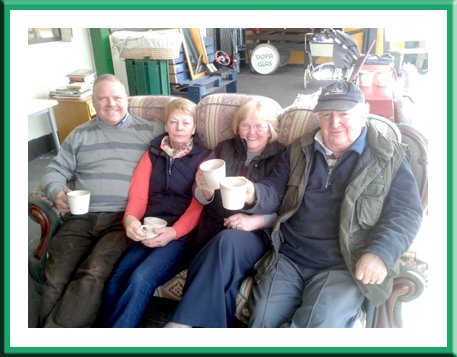 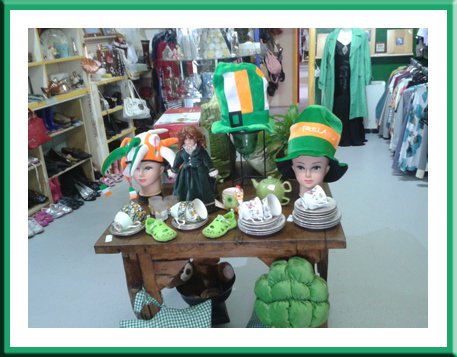 Any unwanted Christmas Presents would be very welcome.

Siopa Glas in Ballon is the main source of funding for Ballon Improvement Group. Siopa Glas is staffed by local volunteers and all monies collected are used to enhance Ballon Village, Ballon School Garden and Wildlife area.

Coffee Mornings and Vintage Tea Days are regular events throughout the year.  Charity and Sporting Groups are welcome to use the  the facilities of Siopa Glas. Bookings taken during January for 2014.  It is hoped to have just one such event approx every six weeks.