Mature volunteers wanted to help in Siopa Glas. Call in and have a chat.

There are many advantages in being a volunteer and you’ll get as much out as you put in,

Many thanks to all the volunteers and workers who gave their time and expertise in making Siopa the success it is.

Thanks too to the many people who gave the shop their redundant possessions and the people who then bought them thus earning money for village enhancement.

Today Siopa hosted the Christmas Market where local craftsmen and woman displayed their hand crafted wares. The official opening was by the chairman of Carlow County Council John Murphy who encouraged all to support local businnesses and to follow the example of Siopa Glas to recycle and reduce waste.

An unexpected event was to have the church choir singing a selection of Christmas music. With four part harmony the choir sounded three times their acual number and within the small space the acoustics helped to bolster this. Don’t forget their Concert on Sunday 18th December at 7.30 in Ballon Church.

The pictures cover the opening and the tables of marketeers who have set up their displays to great effect.

Full marks to Siopa Glas who have initiated another first and particularly Máire, Breda and Catherine. 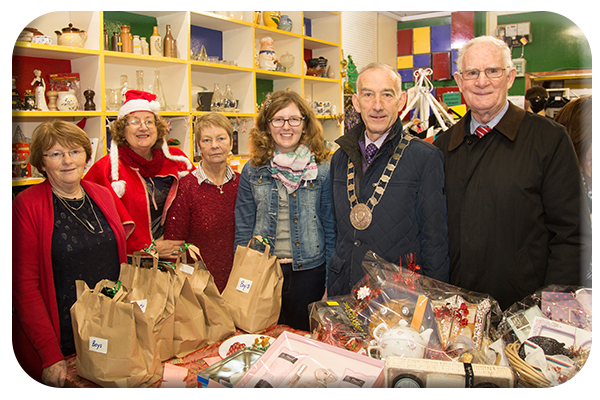 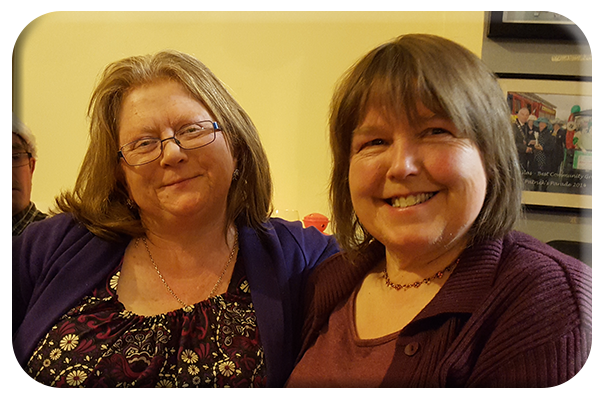 The night of Song,dance,storytelling,music was a  brilliant success. 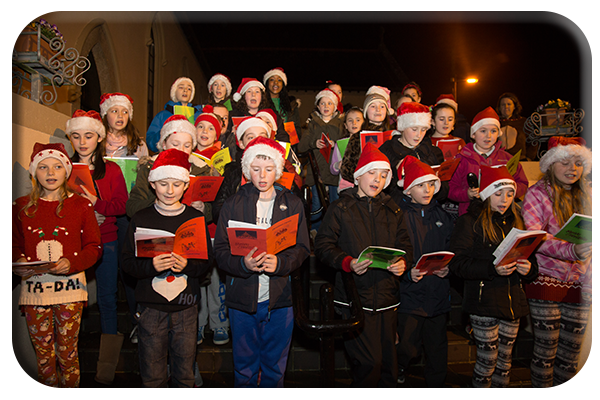 The School and Siopa Glas had their annual carol parade to celebrate the offficial switching on of the Christmas Lights. Meeting at the church they paraded to the Millennium Clock and entertained us with a selection of carols. Then they went to Siopa Glas for hot chocolate and bikkies. Bernie Mullins oversaw the event from her temporary wheelchair and Rose Whelan led the well rehearsed choir. Maire George with Breda and Marian and other helpers organised Siopa and the refreshments. 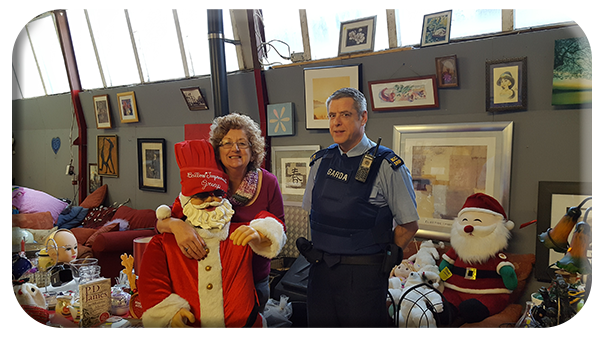 Local garda Mick Egan called to Siopa to give some Christmas security advice.

Rathoe Group are entertained to tea and goodies at Siopa today. Out came the best bone china and cake stands. With scones, cake and  apple tarts. You wouldn’t get it at home. You might at the Shelbourne but it would cost €49 per person. 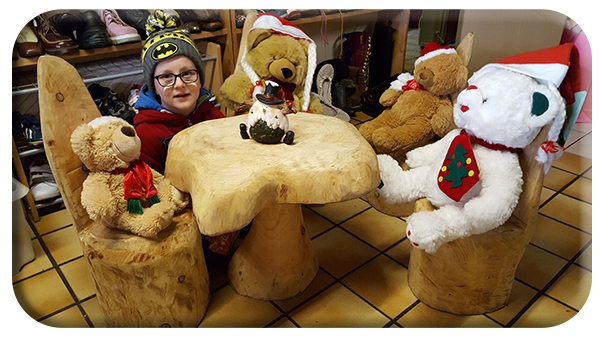 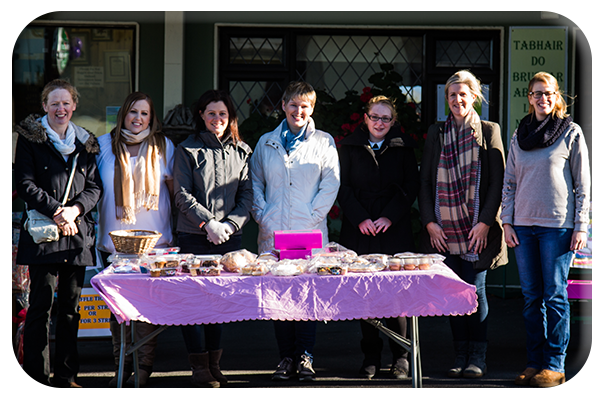 at the Childcare fundraiser in Siopa Glas 5/11/16 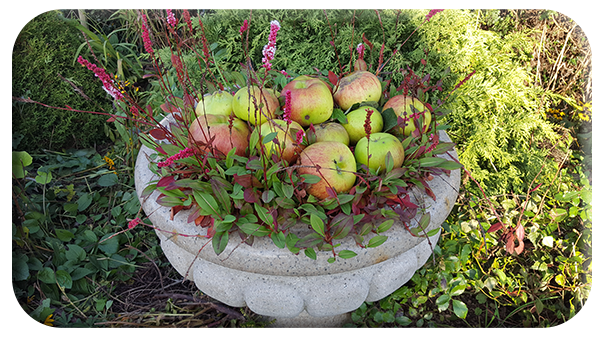 At Granite Seat bed between school and Centra
Huge cooking apples. Available at the Siopa Glas. 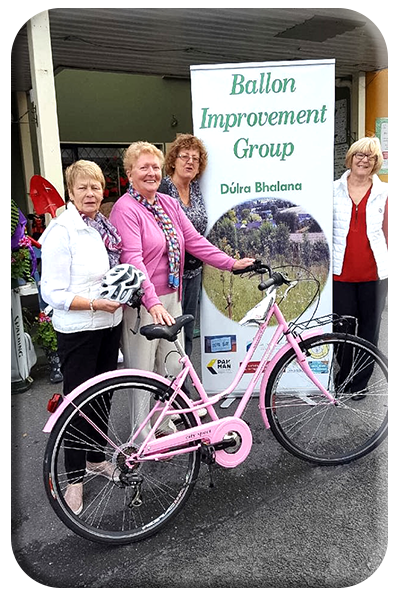 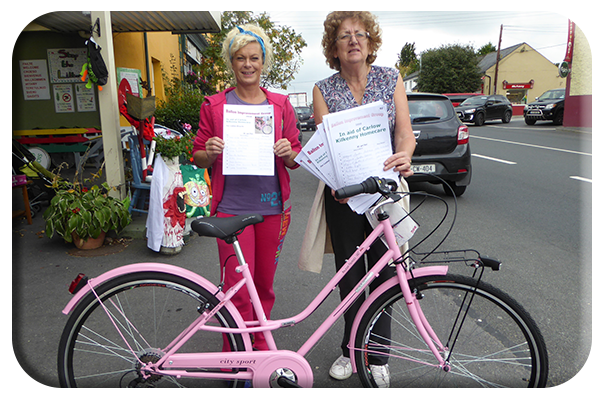 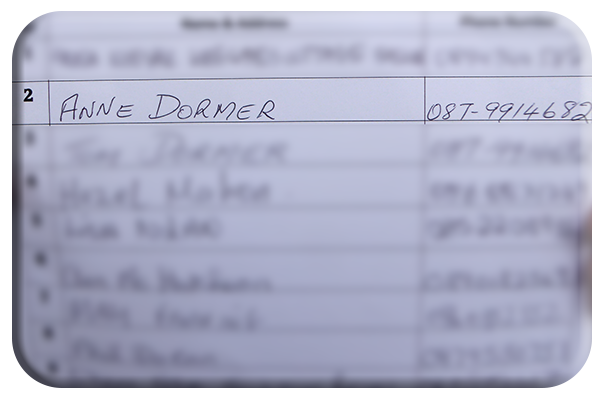 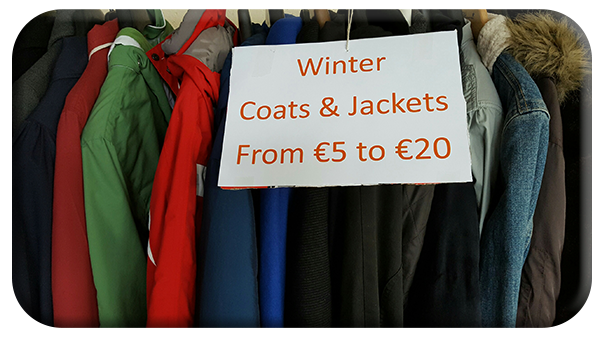 Siopa Glas is taking an active part in October Renewal and Re imagine Month with Carlow County Council. Poster to follow. 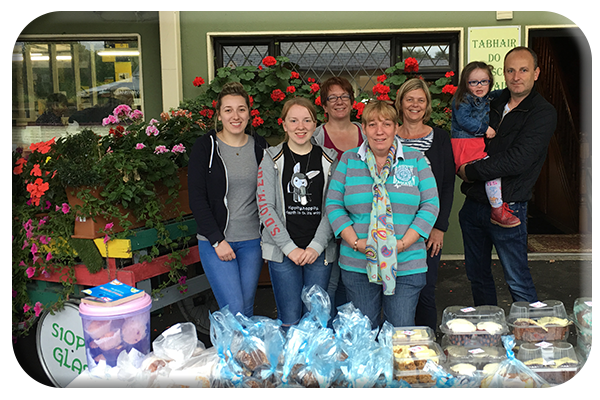 LORRAINE Farrell from Ballon with a pair of mens dancing shoes just donated to Siopa Glas.Lorraine recently joined the team at Siopa Glas as a TUS worker.
The very comfortable swivel office chair is a new arrival at the Siopa.. 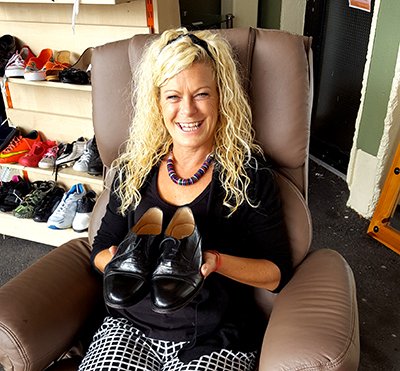 Our range of items at the community recycling shop continues to increase and our supporters continues to amaze.  HUGE THANKS TO ALL. 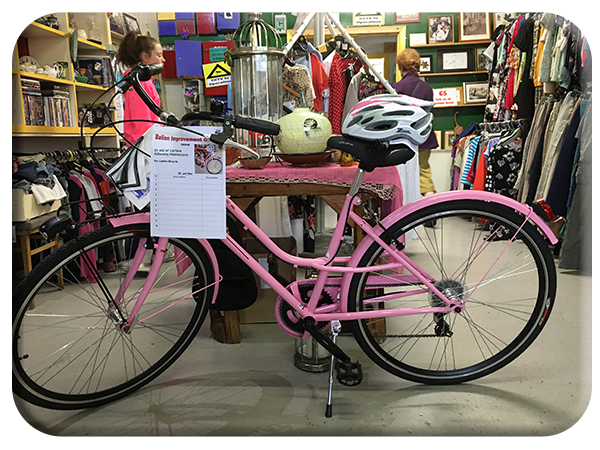 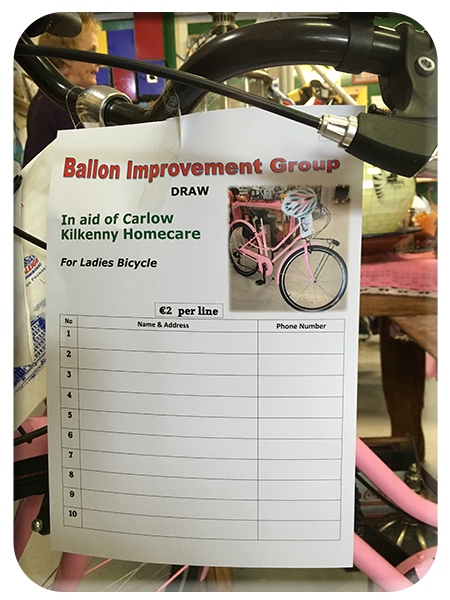 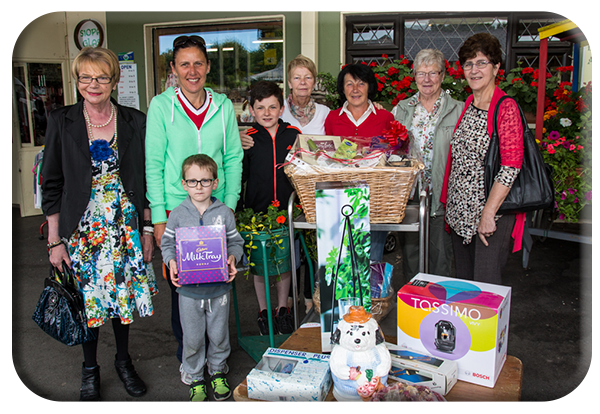 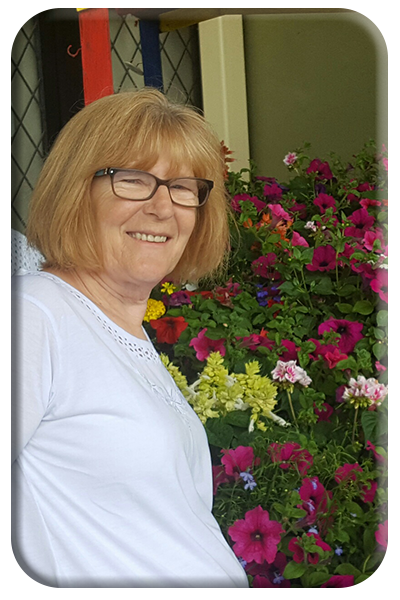 Marion Doyle has worked tirelessly since 2012 for the community projects that is Siopa Glas.  MARION said “I enjoyed my time working in Siopa Glas and being a community volunteer was a great experience”.

Marion is going to do a bit of traveling and all at Siopa Glas wish her the very best for the future. 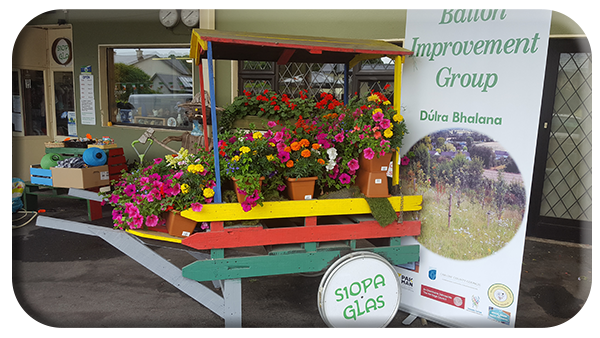 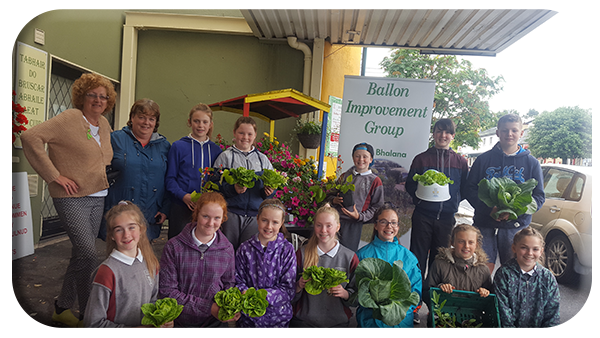 PRODUCE FROM school Garden presented to Siopa Glas today.  SHOPPERS tomorrow can pick up some lovely herbs and vegetables. There will be a free garden herb plant for purchases of six euro or more tomorrow Tuesday and also on Wednesday.

At the recent “Ballon’s Got Talent” Event Siopa dressed up plenty of children to parade their stock during the interval. 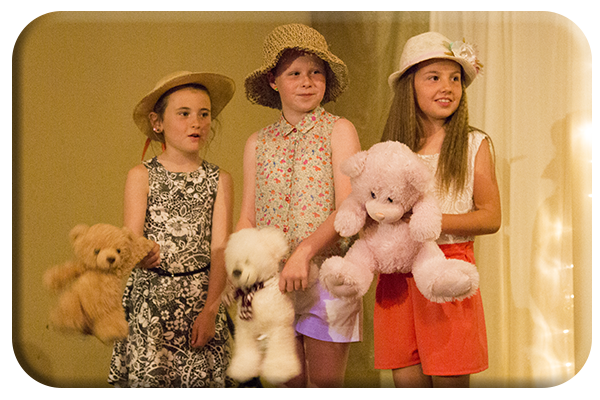 See them all here 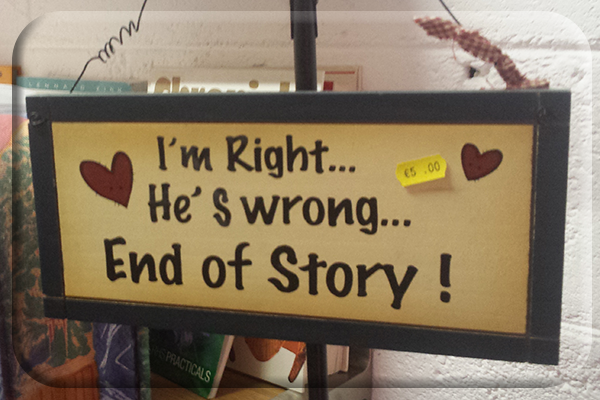 Loads of items coming in daily to our Community Shop.
Come on in have a browse and enjoy some retail therapy.

Do not forget us during this week which happens to be World Recycling Week. 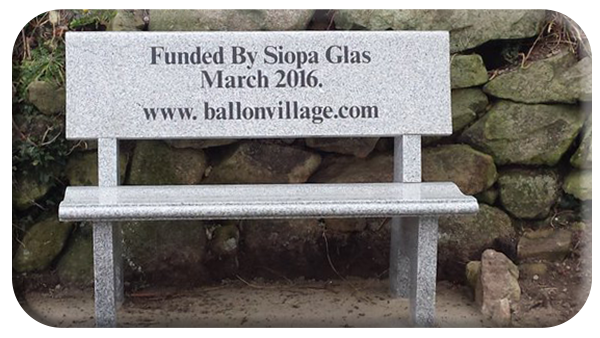 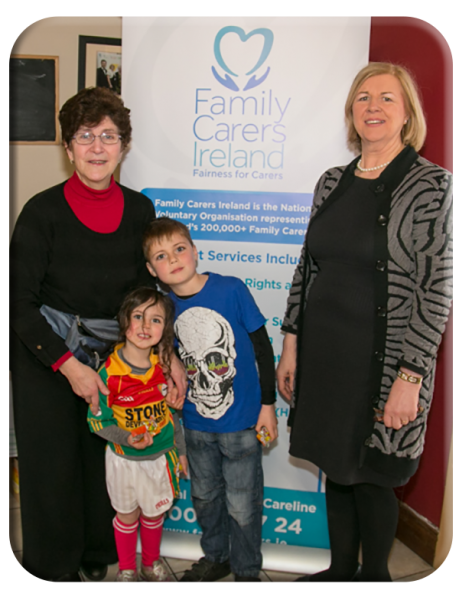 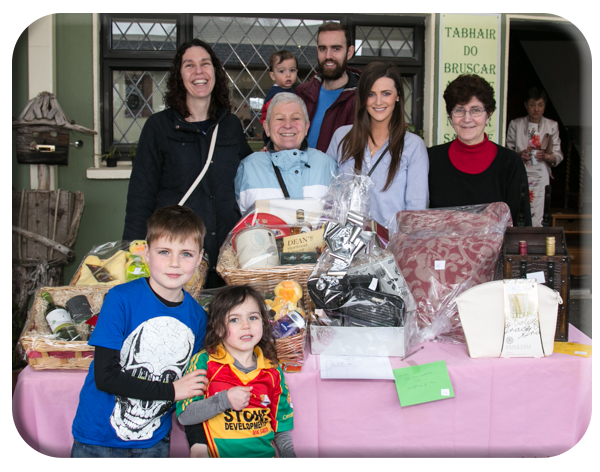 Calum and Evie Joyce and the Big Raffle

There was a great attendance  at the 1916 Rambling House Event held at the Siopa Glas in Ballon on Sunday 6th March.
Some people arrived dressed as if it was 1916.   Many of the songs and stories had a 1916 theme.
Many thanks to all who attended and helped out in anyway. 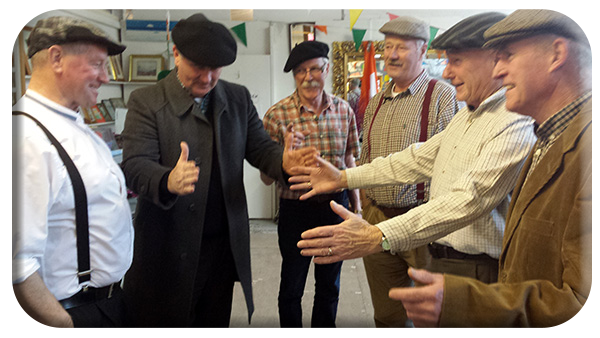 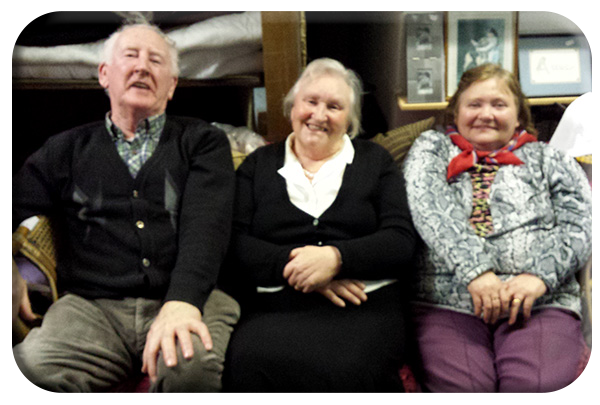