On this date a special ‘edition’ was held to celebrate the life of Jim Nolan who recently passed away. It was conceived by the current Fear an Searmenas, Seamus Dowling, and the previous one, John Candy as a tribute to Jim who has, over his lifetime, contributed so much to the art of entertainment. Friends and performers from the Song and Story houses lent their support to a special evening and were joined by many of his family. There was standing room only with about 100  people stretching the capacity of the hall.

A special tribute was composed by song writer and business man John Candy who chose Greta Dowling to accompany him in his dialogue. Copies were made available for all and a framed copy was presented to Jim’s son John from Ballinrush.

Song and Story houses are held in Rathoe Hall on the fourth Sunday of each month starting at 8pm.

As above but with the Parting Glass added

Song and Story houses are held in Rathoe Hall on the last Sunday of each month starting about 8pm. and at venues in Camolin, Clonmore, Crossabeg, Enniscorthy, Oulet, Rathdangan, Clonegal, Glenbrien and Bunclody each month.

The M.C. for Rathoe is John Candy and he possesses a king sized shillelagh. He invites to the floor entertainers who take temporary ownership of the shillelagh while they perform. 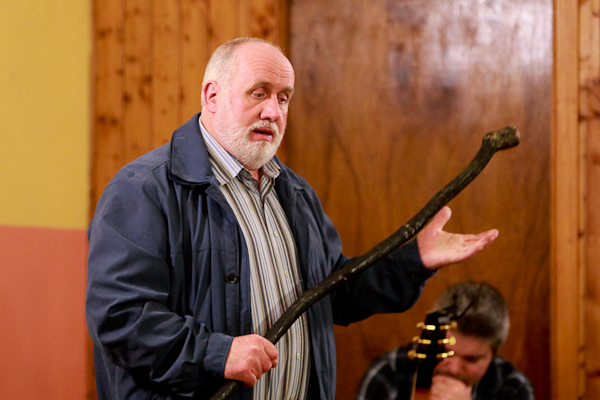 So there is a variety performance for the evening of songs, stories, jokes, music and dancing with free refreshments and a generous raffle.

Admission is free too and it is remarkable that interest is sustained over the years with such a large following.

It is to be recommended as an evening’s entertainment and a glimpse into the culture of rural Ireland.

Some of the performers are shown below.