……by Declan Nolan and Patricia Lawlor

Monumental and stonemasonry is one of the oldest trades to be carried out in the village of Ballon. It is, indeed, one of Ireland’s oldest crafts.

It has been practiced by the Nolan family of Ballon Village since the early 1800’s. Patrick Nolan, founder of the Carlow Stone Centre, represents in direct line the fourth generation of Ballon Stonemasons.

Until the 1950’s nothing much had changed in stonemasonry since the middle ages. The method used to extract and dress the stone had remained unchanged for generations. 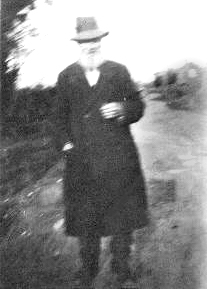 The photo shows the late Johnie Nolan of Ballon (1885 to 1971) extracting Carlow Granite.

The work was heavy and labour intensive. Stone was extracted manually by the mason cleavers using, hammers, chisels and picks. It was transported by horse to the work-site where stone-dressers carved and shaped it into the final product.

Much of Ballon stonemasonry involved working granite and limestone which is the natural bedrock of Co. Carlow.
Examples of the beautiful hand cut pale silver-grey Carlow granite can be seen in the old National School (now the Enterprise Centre) and the Garda Barracks. Another example is the gateway piers at Rathoe church. These cost £40 at the time to supply and fit.

As legend has it Johnie Nolan was working on a cap stone 60ft up on the church. A friend of his coming out of the porter house called up to him and invited himself up for a chat. All went well until the effects of the porter wore off. When the porter house man was sober he had an aversion to hights. Poor Johnie had the dangerous task of getting the both of them down safely.

Examples of 19th century stonemasonry can be found in granite stonewalls about the village. 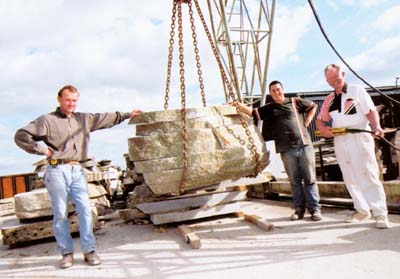 Mechanisation slowly changed the stonemason’s lot. From the late 1940’s machinery was developed to lift, cut and assist in “dressing” stone. However, much work is hand finished so that the final product has that special finish.
Note the heavy lifting equipment and the slices of stone cut from the field boulder.

Pictured are Patsy and Declan Nolan and Benny Doyle 2001

This is an example of what can be acheived with modern methods. The rock was extracted from Ratheenlleigh, Mount Leinster, weighing 13 tonnes.
It was formed into an arched and carved carport lintel and measures 18ft long.
c. 1996

The Ballon men are from L to R:-

Carlow has an interesting geographical feature in that to the west of the Barrow the stone is mainly limestone, a sedimentary product, but to the east of the Barrow it is mainly granite, originating deep below the earth’s surface.
South of Ballon are the gravelly hills and the area is covered with large rounded granite boulders formed during the movement of the glaciers in the ice age.
It’s a natural deposit where the glaciers must have stopped and then melted.