The Bakery in Ballon

My father James Nolan or Jimmy the Baker, as he was affectionately known, was born in 1886 and died in 1962 at the good age of 76. During his lifetime he carried on the proud tradition of bread baking in the village.
The bakery was situated on Chapel Street opposite where I now live and where we once ran a thriving grocery shop from which the bread was sold. 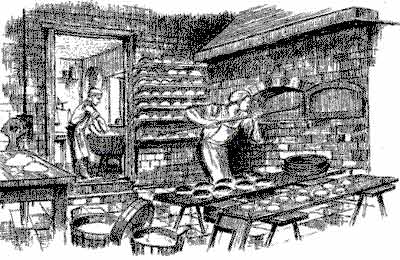 I started to help dad when I was about 16 years old and it meant alternate early mornings and late evenings
There can be few smells so welcoming as that of freshly baked bread and l well remember the mouth-watering wafting aromas of the pans, turnovers and cottages that filled the early morning village air.
To have the bread on the counter by shop opening time called for a 5.00 a.m. start.

My father would first set the great ovens alight. The fire, of sticks and coal, was positioned at the right hand side of the oven which was a brick structure about seven-foot square raised four feet above the ground. The base was lined with tiles on which the mix was laid. Access to the oven was through a front door with a peephole to view the baking process. When the right cooking temperature was reached the oven was washed by a cloth on the end of a long stick. This was to get rid of any stray ash or sticks from the fire. The fire was then put out and the bread would cook from the remaining heat stored by the bricks which formed the oven. My father could judge the correct cooking temperature from the brightness of the oven bricks. There were no thermometers then and this is where the skill, tradition and craft of the baker came in to play.

He made the bread by the sponge and dough method. In the previous evening the sponge was first set by using about half of the flour, a little more than half of the water and all the yeast. One finished batch would use about 10 stone of flour. 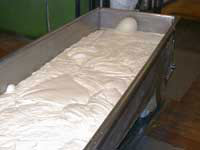 This was mixed at one end of the wooden trough, pronounced trow locally, and kept in place by a wall of flour. When this was finished he always made the sign of the cross over the sponge. Then in the morning he would take down the wall of flour and the almost liquid sponge would flow into the trough. He would then add the remaining ingredients and knead it by hand until he got the right mixture.

This would be left untouched for up to three hours where is would continue to rise and the force of the rising mixture would actually raise the wooden lid on the trough.
The lid of a second trough was used as a table and it was my job to cut and weigh the kneaded dough and have it ready for dad to mould into the required shape. There was a large loaf, a cottage loaf and a pan. The bread was brushed with buttermilk before going into the oven to give it a shine and once carefully positioned on the tiled oven floor it was moved around on long wooden peels similar to a spade. My father’s trained and watchful eye inspected the baking process through the aforementioned peep hole. It took about an hour to bake the bread.

Dad always included an extra bun which he gave in turn to one of the wide-eyed local children who came regularly and viewed with awe the skill with which he practised his trade. This caused great interest and dad did his best to make sure everyone got their turn.

Friday and Saturday were the busiest days when about 15 dozen loaves were baked while about half of this amount was produced during the remainder of the week.
The bread was sold in our shop and the large loaves and the pans sold for sixpence halfpenny and the cottages for 3 pence.

There was competition too and Connolly’s of Bagenalstown and Paisley’s of Tinahely delivered to other shops in the village but the locals remained loyal and always bought our bread.

However modernisation had overtaken us and our little bakery had run its course and in 1953 my father retired. The introduction of modern baking techniques and large-scale production signalled the beginning of the end and it was with a heavy and a reluctant hand that the bakery closed for a final time.
I was sorry to see the bakery close, as it was an important part of my childhood.

(This article first appeared in the Chronicle 2003)