Tess Blanche of Ballinadrum recalls the Forge and it’s role in Ballon. 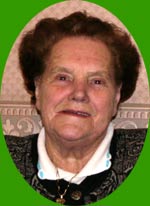 My father’s name was John Brennan. He was born in 1883 and was the village blacksmith in Ballon during the first half of the 1900s. Both his father (Johnny) and grandfather (Mick) were blacksmiths in the village during the 1800s. It was the Brennans’ proud boast that no animal they ever shod went lame from faulty workmanship. 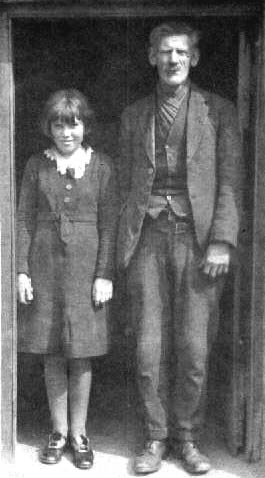 (Tess as a young girl with her dad John)

The sights and sounds of the forge are still vivid in my mind – the showers of sparks flying off the huge anvil, the hissing of the shoes as the red hot iron was dipped in the water trough and the hollow sighing sound of the manual bellows that blew life into the eternal coal fire. Other sights and sounds linger too – holding a candle for my father while he shod the animals on dark winter nights (there was no electricity in Ballon until the early 1950s); the procession of jittery horses and donkeys coming in to be shod, with the occasional pony, jennet and even a mule added for good measure; and the crunching of iron-rimmed wheels along the untarred roads of my childhood.

Wet days were the busiest when farmers couldn’t get out on the land. They took advantage of the break to have a new set of shoes made or to get a loose shoe fixed. Leckys of Ballykealy sent their hunters as well as their farm horses to my father and on Saturdays it was my job to take the bill to the steward for payment. It was also often my job to steady the horses while he worked, a huge hoof clamped between his knees, while the powerful animals tugged backwards and forwards. He pared the hooves and measured for shoes, rasping and hammering, sizzling and clinching and punching. The forge was always full of the acrid smell of burning hoof, dusty iron, and coal smoke.

He worked six days a week. He was a sociable man and so the forge became a focal point in the village. No doubt the ever-glowing coal-fire was enticing too! There were always people around chatting and telling stories. He kept a donkey himself both as a means of transport and for drawing home timber, potatoes and hay. He was always trading donkeys with passing travellers (and knocking great fun out of the exchange). This left his children with the task of trying to get to know the habits and temperament of the latest donkey! He liked to hunt with his dog and snare rabbits, have a flutter on the horses, was fond of pitch and toss and was a passionate card-player. On long Summer nights, under the spreading elm of the Bulltree, the laughs and shouts of the card-players echoed through the village. In Winter the game went snugly indoors. He beat the big drum in the Ballon Fife and Drum Band that was the pride of the village for many years from about 1915 until well into the 1920s.

Shoeing the Wheel
The forge, as many recall, was situated to the side and back of the last house on the left as you leave the village for Bunclody. It was constructed of stonewalls with a timber-framed canvas roof that always threatened to blow away in high winds. 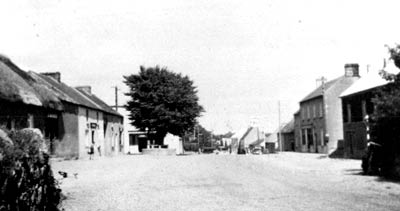 A little row of trees, fronted by some large stones used for seating, jutted out into what is now the street. Opposite these large stones was where my father shoed the wheels, that is, he set the iron bands back on the wooden cartwheels. Bands loosened with toil and time, and the carts would come wobbling arthritically to the forge. He would chisel out a small piece of iron from the band, and then redden and beat the band back together. There was no soldering equipment then!

I well remember the scorching turf fires that were lit in front of the big seating stones; the iron band was set in the fire to soften. When it was red hot my mother helped my father to gingerly remove it with the aid of makeshift tongs. Many people still remember the square hole, formed of granite stones, on the street in front of the forge. The wheel hub was placed in this hole so that the band could be tapped back on safely. When the iron cooled it tightened its grip on the timber wheel and the job was done. The big excitement, among all this backbreaking work, was making sure the heated-up timber wheel didn’t go on fire, so it was all hands on deck, so to speak, dousing the often-smoking timber rim with buckets of water.

Doyles of Ballon
All the raw material my father needed for the forge was bought locally at
E. J. Doyle’s in the village (Doyle’s again now, after all the changes!). Doyles was the proverbial general store. They had hardware, drapery, a grocery, an undertakers, even a medicines cabinet and a pub. At the back they did their own bottling of the porter that arrived in wooden barrels. Doyles was where my father bought his lengths of shoeing iron, shoeing nails and coal. In the early years he made all the shoes himself. 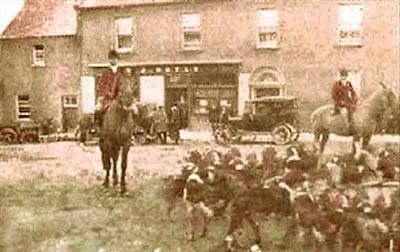 (The Hunt gathers outside of Doyles)

On hunt days in Ballon he prayed that no farm horses would come in, or that none of the hunting horses would lose a shoe, so that he could follow the hunt without interruption. He loved the colour and the excitement, as we all did. In old age he entertained his grandchildren with stories about the wily fox that attempted to outwit the hounds, about the rituals of closing up the man-made coverts on Ballon Hill and in Ballykealy on nights before the meet to prevent foxes getting back in after their night-time travels. He also recalled the hubbub around the Bulltree as hounds and horses and people milled about in preparation for a long adventurous day.

The Spinning Tops
Spinning tops were a common pastime during my childhood. Children would come to the forge with cone-shaped blocks of wood into which my father would hammer a piece of spiked iron. The children would then bind the top with cord or twine and grasping the end of the cord fling the top spinning onto a flat surface. If you had the ‘knack’ of expert pitching your top could out-spin all others and be the last to fall, or it could strike and knock the others, cracking some of them into pieces. You were then declared the winner. Boxwood was the toughest of woods and if you were lucky enough to get it, your top could demolish all comers. Competitions were held and reputations made and lost and my father enjoyed his part in it all.

Five girls in a row were born to my parents of which I was the youngest. There was no son to carry on the Brennan blacksmithing tradition into a fourth generation. Maybe my father was disappointed, I don’t know. He loved the children he had and that was good enough. Anyway, farm life was changing rapidly. Mechanisation was on its way. Jim Hughes of Kellistown had the first tractor in the parish in 1935. Faced with the huge increase in mechanized farm equipment and because he was getting on in years and with no son to take over he retired from blacksmithing in the early 1950s. He carried on with his expanding newsagency (which he’d had since the late 1930s) until his death in April 1963.

I remember him as Longfellow admiringly describes his prototype in The Village Blacksmith:

The smith, a mighty man is he,
With large and sinewy hands;
And the muscles of his brawny arms
Are strong as iron bands.