It was lovingly built, almost solely, by Mr. Mrs. McArdle on land donated by Sean Nolan. The site originally had houses on it as a continuation of the small houses running up from the Post Office. Sean and his wife can be seen at the front centre of the photograph. There was a great demand for scrap metal to form the skeleton of the structure and many old bed ends and car pieces were used in the construction. 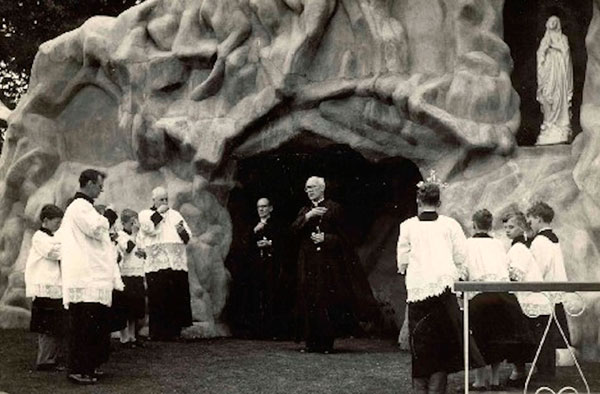 Blessing of the Grotto The priests are Rev. Patrick Breen CC Ballon/Rathoe and Fr. Tom Donoghue. The server on the right looking around is the late Des Flynn

In 2001 members of Ballon Improvement Group carried out some renovation work on the Grotto. The railings were scaled and painted. Some additional flower pots provided and 120 daffodil bulbs planted. When the weather improves the group intends to clean and repaint the ‘stonework’. Father Whelan arranged for the statues of Our Lady and St. Bernadette to be professionally repainted and they look well.

In 2002 the railings were replaced by the O’Toole/Nolan family in memory of Sean Nolan who had originally supplied the land for the Grotto.

On the 16th August, 2009 the Golden Anniversary of the grotto was celebrated with a procession and Benediction by Fr. Howard assisted by Fr. Whelan. After Mass the procession, choreographed by Sacristan Kathleen Condron, proceeded to the grotto and led by flower girls, servers and canopy bearers. The frowning clouds cleared a passage for the sun to shine for the occasion and a kind wind gently warmed the air to make perfect conditions for the ceremony. The statues of Our Lady of Lourdes and St. Bernadette were repainted for the occasion funded by a local collection. The Grotto and grounds were also repaired and repainted and sponsored by the Nolan/O’Toole families. A group picture was taken to mark the occasion but also to complement a similar picture taken 50 years ago and which will form the basis of a heritage plaque under design and initiated by Ballon Improvement Group. A souvenir picture is available through Kathleen and the proceeds will be used for the upkeep of the altar. Following the event there was a generous provision of refreshments organised by the Grotto committee. This was very successful and gave a reason to linger for a chat and to meet up with friends and neighbours and Ballon expatriates who returned for the day.