The Parish of Ballon

The information is collected from several sources and to make for easier reading are not referenced.

The parish of Ballon is situated in the Barony of Forth. (In Ireland a barony is a division of a county)

There is dispute concerning the origin of the name. One source believes it is related to ‘water’ and another to a tribe called ‘Ui Ballein’.

In 1837 it contained 1,439 inhabitants of which 131 were in the village. The parish comprised 3,520 statute acres and was principally grazing land. Ballon hill had a quarry of fine granite. In the R.C. divisions this parish formed part of the district of Gilbertstown called also Ballon and Ratoe.
The chapel in Ballan was in good repair. In the village was a school for boys and girls and there was another at Conaberry. There were about 160 boys and 160 girls in the schools and there were also two hedge schools for about 190 boys and 130 girls.
There are two blessed wells in the townland, one called after Brigid and the other after Cruach. 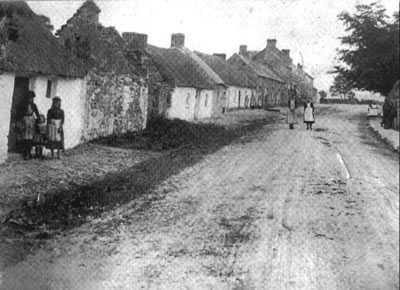