FR PAT TRAVERS BACK IN HIS OWN PLACE – by Michael Dawson

On Sunday, 22 July there was a large gathering of family and old friends in the Church of SS Peter and Paul, Ballon to celebrate with Fr Pat Travers on the occasion of the golden jubilee of his ordination. He was joined by his sister, Mrs Betty Kinsella, along with members of the extended Kinsella family from Killeshin and the Kirwan family from Aghade.  The liturgy readings and intercession prayers were read by Fr Pat’s nephews, nieces and grand-nephews. The music was provided by Caroline Byrne, grand-niece along with her school friend from St Leo’s, Bernadette Dunne. In a connection back to his first mass in Ballon in 1962, the entrance procession was joined by three members of the altar server group at that time.

In his homily, Fr Pat recalled his early intention of joining the priesthood with a plan to join the missionary work of the Kiltegan fathers. Having ended up joining the Sacred Heart Fathers of Jesus and Mary, he studied in both New Hampshire and Cootehill, Co Cavan before his ordination in June 1962. The order had two bases, missionary work in Japan and teaching at a high school in Los Angeles. His posting took him to Los Angeles and the then named Pomona High School (later named Damien High School). He fully expected to get to do his missionary work in Japan. In the intervening years he has done every job in the school from bus driver to Principal (30 years) to President. 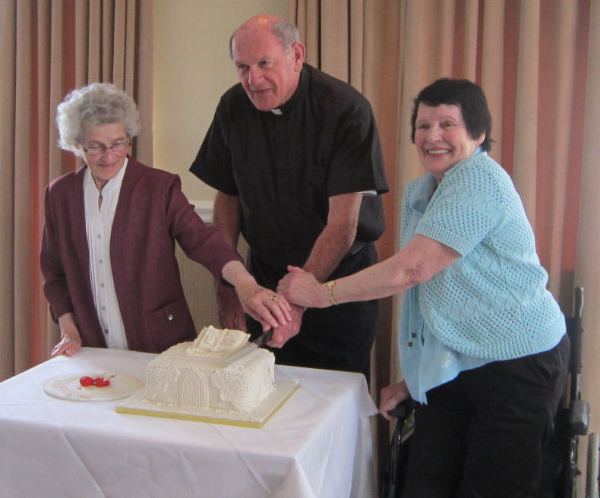 With a missionary zeal still in his head, an opportunity presented itself in a completely different form. He formed a missionary outreach programme to Tijuana with the aid of students and their fathers from his high school. In the past 30 years this programme has helped house, educate and feed families in La Morita, Tijuana, where many survive on just one meal per day.

In a new page to his eventful life, Fr Travers has retired from Damien High School and is now parish priest at Victorville, California on a six year appointment.

Following the Mass, a reception organised by the local ICA and parish committee was held in Ballon Community Centre, at which Fr Travers met up with old friends from both Ballon school and Patrician Brothers in Tullow.

Some pictures on the day collated by Willy Byrne.

I wish to thank most sincerely all the parishioners and friends who helped in any way to make my Golden Jubilee mass and celebration such a memorable occasion for me.
I am firstly grateful to the extended members of my family who took part in and made the liturgy so meaningful. I also wish to extend my gratitude to the ladies of the local ICA guild who not only prepared the hall for the reception but had spent the previous day preparing all the food. The reception in the hall made it so much easier to renew acquaintances with old friends from both primary and secondary school. In gratitude I will include all your special intentions in a Mass I will celebrate on returning to my parish in Victorville.
Pat Travers SS.CC